Charlie Hebdo and the Inner Soul of Humor 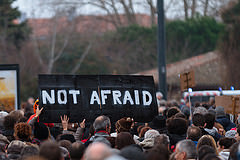 My friend Justin Smith recently wrote a piece for Harper’s Magazine. Justin is a brilliant guy, a philosopher and historian of ideas who also happens to write well and think clearly. Those things do not come together all that often. He’s been teaching for the last couple of years in Paris, at Université Paris Diderot-Paris VII.

This put him at Ground Zero, more or less, on January seventh of this year when the Kouachi brothers entered the offices of the satirical French magazine Charlie Hebdo and opened fire.

In his piece for Harper’s, Justin Smith wrote:

In the days after the Charlie Hebdo attacks I stalked Paris as if lost, dazed and despondent not only at the senselessness and irreversibility of murder but also at the great gap that had appeared between me and so many people I consider friends and equals: educated, cultivated, sensitive people, defenders of the oppressed and marginalized. Righteous folk.

The “great gap” he is referring to is the gap between those who condemned the attack outright, and those who condemned the attack while directing some blame at the artists and editors of Charlie Hebdo for publishing cartoons making fun of Muhammad. As Smith put it, “Five cartoonists had just been killed by a death squad, and many on the left and the right seemed uncertain about which party had committed the greater offense.”

This gap was widened recently when the PEN American Center, which works to defend free expression, announced that it would give the PEN/Toni and James C. Goodale Freedom of Expression Courage Award to Charlie Hebdo.

With that letter, the debate about Charlie Hebdo exploded anew.

Justin Smith’s brilliant piece for Harper’s manages to evade the usual poles of this debate. He doesn’t talk, primarily, about free speech or hate speech. He doesn’t set up a contrast between liberalism and religious intolerance. He doesn’t get into the East/West divide. In fact, he attempts to close that divide. He does so by focusing on the nature of humor itself.

Smith argues that humor is a shared good. Humor—and especially literary satire, Smith reminds us—is not a product of the West and it has no inherent Enlightenment bias. Expanding on this point from his Harper’s article, Smith argued in a blog post on his own website that there is a genealogy by which the modern European satirical tradition can be traced back to pan-Mediterranean oral folklore and to the works of anonymous medieval Arab raconteurs.

The crucial point is that jokes are universal and ancient and that “Europeans hold no patent on it.” We are all jokers, Smith says, and as jokers we can share in a fundamental human act. Jokes are inherently egalitarian for the simple reason that “they serve to remind us that we are all suckers, we are all duped, we are all screwed.”

If we are in the midst of a civilizational war, it is not a war between Islam and the West, but between those who get the joke and those who do not. “Humor,” Smith wrote, “is freedom, and it must be defended—not with guns and bombs, no, but with more, more of the same.”

I remember hearing, as a young man, that Jesus Christ had no sense of humor. This seemed, to me, the greatest argument against becoming a Christian. How could a person—or God—with no sense of humor have anything relevant to say about the human condition?

Human existence struck me then, as it does now, as inherently absurd: Life was so deeply funny (if often funny-tragic) that the idea of a religion without humor was tantamount to a refutation.

Luckily, I was later to find that Jesus did have a sense of humor after all. He liked to play with words and engage in verbal repartee. I’ve written a number of times about the delightful episode in John’s Gospel where Philip brings his friend Nathaneal to meet Jesus. Philip tells Nathaneal that he thinks Jesus is someone special, someone foretold by Moses and the prophets. “Really,” says Nathaneal, “could anything good come out of that stink hole Nazareth?” Much hilarity then ensues.

Jesus is funny and playful with the Samaritan woman at the well, in his little trick with Caesar’s coin, and in many of the bewildering and absurdist parables he tells about the kingdom of heaven. But it cuts deeper than that.

The very idea that God becomes a man so pitiable, so powerless as to be unable even to convince the bigwigs in Jerusalem not to kill him is both profound and, yes, funny. The funniness of Jesus being the son of God is the funniness of a deity who gets it, who is willing to play with us down in the dirt where, as Smith puts it, “we are all suckers, we are all duped, we are all screwed.”

The humor of Jesus, by being a humor of humility, does not mock from a position of privilege. The humor of Jesus comes from a man down in the trenches suffering along with the rest of us, doomed to die on the cross — the greatest theological punch line of all.

The question, I suppose, in defending the humor of Charlie Hebdo, is whether its jokes share this same humility. In the pages of Charlie Hebdo, are the Muslims of Europe being mocked, or are they being invited to participate in a general mockery?

I don’t have a clear answer. I don’t think Justin Smith does either. The value of his brilliant contribution to the Charlie Hebdo debate is in teasing out this serious question about the inner soul of humor.

Photo above credited to Pierre-Selim and used under a Creative Commons license.

June 2, 2015 The Beautiful Attitudes
Recent Comments
0 | Leave a Comment
Browse Our Archives
get the latest from
Catholic
Sign up for our newsletter
POPULAR AT PATHEOS Catholic
1

Protestant believes in Purgatory after long drive through...
**SATIRE** Calvin Wesley, a Bible-believing follower of Christ and devout Protestant, was...
view all Catholic blogs
What Are Your Thoughts?leave a comment
Copyright 2008-2020, Patheos. All rights reserved.