Here at Last is Love: The Poems of Dunstan Thompson 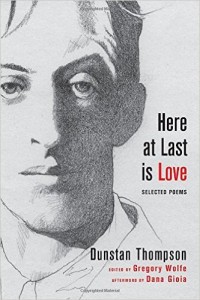 I get tingly with anticipation when I’m about to meet a new poet. I don’t mean the poet in person; I mean meeting the poems of someone whose work had been unknown to me.

And so it was when I opened the new selection of poems by Dunstan Thompson, Here at Last is Love, just published by Slant. But this wasn’t to be my usual sort of first meeting, because first in the book comes Greg Wolfe’s rich biographical introduction. With gratitude, I was truly “introduced” to Thompson: to a man whose life was shaped by opposing desires—for the Catholic faith of his childhood in the 1920s-1930s and for homosexual love.

Around age twenty, Thompson left the Catholic Church and began a series of tormented love affairs with various men. To be gay in the 1940s was to be doubly cursed: by society and by the Church. Thompson felt himself doubly sinful. At the same time, experiencing World War II in London, he was horrified by war’s brutality.

After the war, two profound changes marked Thompson’s life forever: In 1945 he began what was to be a life-long relationship with Philip Trower, and soon thereafter he felt drawn anew to Catholicism and returned to the Church in 1952. Of course, the conflict between a gay relationship and being Catholic had to be resolved; he and Trower vowed to remain chaste. They lived together as partners until Thompson’s death in 1974.

Thompson published his first two poetry collections in the 1940s; his remaining poems weren’t published until after his death. Critics have often seen a radical split between the poems before and after Thompson’s return to Catholicism. But Greg Wolfe argues persuasively against a neat separation between the poems of these two periods, as does Dana Gioia in his superb afterword to this volume. Rather than enter into this debate, I want simply to recount my impressions of Thompson’s poems as I met them, page by page.

And what I met first, in the early poems, was a brilliantly crafted angst: sonnets, villanelles, and other densely rhymed iambic pentameter. As distraught as Thompson was by both war and illicit sex, his intellectual self was able to master his distress, if only for the time of composing a poem.

Take “Villanelle II,” dedicated (as many of these poems are) to a man, presumably a passing lover. Punching through the poem is its repeated line “The dark is danger though it dawns each day”—those ds shot out like bullets. Also repeated is the line “Disaster knows me as a mother does.” Here the overwhelming sense of doom beating through the poem is held tight and shaped by poetic craft. And this sense of doom, though personal, also catches the anxious gloom of a culture engulfed by war.

Loneliness haunts these early poems. I think “lonely” is their most-repeated word. It’s a loneliness in the midst of sexual liaisons’ intimacy: lonely because these trysts were fleeting and unfulfilling. Lonely also because of the inevitable loneliness of death on a battlefield. Love here is as fatal as death, and often a poem will intermix images of war and sexual anguish so that each becomes a metaphor for the other.

Then in the poems after Thompson’s return to Catholicism and development of his lifelong relationship with Trower: what relief! It’s as if his poetry, once gripped in a tight fist of existential anguish, is released to fly freely into the sunlight. Formal elements remain; Thompson still enjoys rhyme and favors iambic pentameter. But there is a calmness and brightness. Thompson’s inner self is at peace, so he doesn’t need to keep making it the subject of his poems.

As both Greg Wolfe and Dana Gioia note, Thompson becomes drawn to historical figures and places—subjects beyond himself.

So, for instance, in “Statues” he celebrates how classical Greek sculptures might have transformed their models’ lives into works of beauty:

I wonder what the models thought
When, standing naked in the light,
They watched the sculptors draw them out
Of minor beauty, recreate
Them with a grace beyond their own…

Those models seem to me wise men,
Who, troubled by themselves in stone,
Discovered then their true design:
And so their lives, I think, outspan
Time by a beauty worked within.

Images of re-creation, of purification. As is this simile in Thompson’s “In Memory of John Keats”: of poems that “give back your image like / Gold clarified by fire.”

Even war can be contemplated now with calm. In “A Soldier in England”:

After the hatred he began to love.

After his loneliness he talked to friends.

Loneliness dispelled! Imagine the joy of comfortable friendships after years of secretive trysts.

Not that melancholy is totally absent from Thompson’s later poems. But unlike the anguished melancholy of the early poems, now it’s a poignant reflection on time’s inevitable passing. In “Passage” he describes

The plums, the pears, the ripening apples, rain
In the sun; and past summer plants new seeds…

These many soft declensions of the day,
So hard to take to heart, bear life away.

There are poems explicitly on religious themes as well. I don’t think they’re his best, but each has its special interest.  In “Magdalen,” he imagines her inner world (and I wonder if he was drawn to her, whom he treats in the traditional way as a sexual sinner, because of his own past). In “The Halfway House,” he has a monk say that what the mystics meant by “kindness” is “The daily going up of self in smoke.”

What could be more gratefully exhilarating than feeling one’s oppressive, guilt-ridden self go up in smoke? This line has become a mantra for my own prayers.

If you don’t believe in the transformative power of conversion, or re-conversion (or even if you do), read these poems.