The Rothko Chapel: The Dark Before the Dawn

The Rothko Chapel: The Dark Before the Dawn October 21, 2015 Guest Contributor 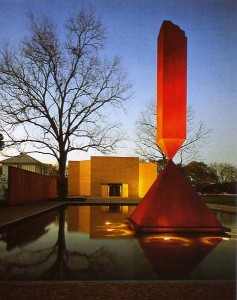 The few years I lived in Houston’s Menil neighborhood, right behind the University of St. Thomas, I felt like I’d been invited to live in a sacred garden, a nearly prelapsarian environment.

It is a beautiful space, near the art museum known as the Menil Collection and its park, and bordered by several streets of Craftsman-style houses.

Yet while I lived in my “Menil house,” I was forced to learn more about darkness and my faith and how it might endure. Both my daughters, in their early twenties, were in trouble. They’d become entangled in bad relationships with jealous, controlling men. They’d begun abusing drugs.

During that time, I saw my daughters less and less; they seemed to be disappearing right before my eyes. I’d invite them to the house every couple of weeks or try to meet with one or both of them for coffee. Often they’d say yes, only to cancel at the last minute or forget to show up. Or when they did show up, they’d arrive with their drugged, unpredictable partners.

On a positive note, my friends loved my new space and were happy to stop by or spend the whole day with me there. In the fall, we could walk to the Greek or Italian festivals. Or we’d visit the Menil Collection or just sit on my front porch, enjoying the view—the park, the massive live oaks, and directly across the street, the Rothko Chapel.

A happy accident, since I’d done nothing to deserve such good fortune. But the chapel and its setting would sustain me over the next two years as I tried to find peace for myself or, if I dared hope, a miracle for my daughters.

The Rothko Chapel, completed in 1971, presents itself as a small octagonal brick building, designed by Philip Johnson for Dominique and John de Menil. It contains fourteen unusual Rothko canvases—unusual because they aren’t the bright, colorful canvases typical of Rothko’s most famous works. These canvases, completed between 1964 and 1967, are dark-hued rectangles in purples and blacks.

According to the chapel website, Rothko never mentioned why he chose these colors for his canvases. Yet there are some theories out there. Suna Umari, who has worked at the chapel many years, says that being in the presence of these canvases offers windows “to the beyond.”

Dominique de Menil explained that the dark paintings “have startled many visitors who associate darkness with gloom.” Many people, she wrote, “are unprepared for the monumental gravity of these vertical panels…They feel plunged into the night. Indeed it is the night—but not quite. Even in the dim light, purplish color slowly emerges from the darkness…it is predawn.”

While I could write you a book about the worry and dread I felt for my daughters during that period of my life, I eventually learned that I couldn’t rush in and save them, that I could only use my good sense and my prayers and my influence as someone who loved them dearly.

And in the early mornings before work, I could sit on my porch, the yard shaded by huge trees. From that angle, I could see the Rothko Chapel and Barnett Newman’s Broken Obelisk sculpture, which appeared to defy gravity and float on the reflecting pool. A few steps across the street and I could stand in front of the chapel and the pool, watching a pair of blue heron in the water.

Another few steps, through a gap in the bamboo, and I could find a fig tree spread out across the lawn. If I arrived early on an August morning, I could find some ripe figs, leaving plenty for my neighbors, who also enjoyed the bounty. While I inhabited this space, sometimes I could quiet my incessant fear about my daughters’ complicated, risky lives.

Often while I walked in my neighborhood, I passed one of the Franciscan nuns from St. Thomas, who was running (for exercise), her brown habit kicking up above her ankles. She’d smile and wave; I’d do the same, knowing nothing of her life, but wishing that my life were as simple as hers appeared to be. Still, she had made me smile.

Some days after work, I’d hurry to change into my jeans and a tee shirt. Then I would walk across the street and sit calmly in the chapel, enjoying the silence and the huge canvases that projected “nothing.” Instead as my eyes focused in the dim light, I could feel myself looking into a calm ocean or into deep space. The colors seemed to announce themselves to me, as if, yes, night would pass us into pre-dawn.

Living there by the Rothko Chapel helped me rise each day after sleeping, when I only wanted to sleep. While I might attend a reading or a lecture in the chapel some evenings, it provided me a safe place to sit in silence on other evenings, trying not to plead with God too much about my daughters. This was a place where in the dim light, unrecognized and undisturbed, I might be pulled into the paintings, where I could grieve for my daughters’ innocence lost in ways I’d never imagined. I would be comforted by the enveloping walls of the chapel’s murals.

To say that I was saved and that my daughters were eventually saved sounds too simple. There are many threads to their stories. I went to the chapel faithfully, though, and practiced patience and meditation; I often left with great hope, or just enough to get through another day.

Susan Barnes, who wrote The Rothko Chapel: An Act of Faith, says that “you walk into this chapel and you know, now, that it has been sanctified by the prayers of people.”

I felt that sanctity, those prayers, and added my own. Now I hope that others, who find themselves in the chapel’s quiet, can experience the same sanctity and leave with the faith in all the prayers that have been uttered there.

October 22, 2015 Blessed Are the Tentmakers
Recent Comments
0 | Leave a Comment
""It doesn’t matter when you start the Sinatra Christmas playlist or put up your tree. ..."
C_Alan_Nault How to Win the War on ..."
"Yup."
Max Marvel Finding My Inner Calamity Jane
"I an confused by the use of "aural" here: "In The Gutenberg Galaxy, he explained ..."
William G II The Gutenberg Imagination
"My friend is looking for a Pepper Smith he served in the army with, was ..."
Christine Budnack The Love Song of Pepper Smith
Browse Our Archives
get the latest from
Catholic
Sign up for our newsletter
POPULAR AT PATHEOS Catholic
1