The Cave of My Imagination

The Cave of My Imagination April 25, 2016 Guest Contributor 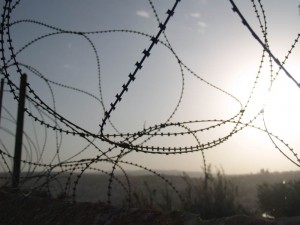 Ma’arat Ha-machpelah, the alliterative name sounded as magical to me as the lives of the people buried there: Abraham and Sarah, Isaac and Rebecca, Jacob and Leah. I learned about the so-called Cave of the Patriarchs, Judaism’s most ancient site, in Hebrew day school, and I still remembered the Hebrew name when I went to Israel for the first time, four decades later.

Since my upbringing as a yeshiva boy in southeast Georgia, I’d moved north to college and stayed, experiencing my own secular enlightenment. I’d become a progressive and a Yom Kippur Jew. But all my religious learning and feeling was still in there, easily recalled when needed to say the prayers over the Chanukah candles or sing the Shabbat Kiddush.

My first brush with the reality that someone with this biography might not be welcomed with open arms to Israel came in Ben Gurion airport. A reedy young woman in uniform plucked me from among the blue-T-shirted young American Christians I’d flown over with, and escorted me toward baggage claim.

The American Bible group, now a mirage-like blue mass in the distance, was singing, while I sang as best I could to persuade this woman to let me, a former super-Jew, into the Jewish state.

My husband (who’d arrived earlier) and I experienced the country through the eyes of our Israeli friends: their fears for their children’s future, their anguish over the racist attitudes of many of their countrymen and leaders.

Toward the end of our stay we went with one of our Israeli friends to Hebron, where Ma’arat Ha-machpelah is located. She’d organized a private tour with a guide from the human-rights group B’Tselem. We visited a Palestinian family in the area administered by Israel.

Then our guide turned us over to a counterpart to take us to the part of the city controlled by the Palestinian Authority. “Have fun,” the soldier at the checkpoint said sinisterly, in his American accent, as he handed me back my ID. We walked through the lively bazaar, bought falafel, then returned to the occupied part of town.

This was like passing through the looking glass. The former market area was scorched looking, shuttered up, deserted except for a pack of dogs and us. As we approached Ma’arat Ha-machpelah, Jewish Messianic music blared deafeningly from a gift shop. The tomb is housed in a magnificent yellow stone building, built by Herod the Great and added on over the centuries: a fortress with minarets.

At the entrance an Israeli soldier asked what group we were with. B’Tselem, our guide told him.

Lefties aren’t allowed in, our guide quoted him as replying. Our guide, who was about to take a leave from the organization to do his army reserve service, held up his phone and began filming. They’re Jews from America, our friend said. This much I got, though I couldn’t understand a word of the increasingly heated conversation between the soldier and our guide. Another soldier came up and said something into a walkie-talkie.

Our friend offered to remain outside with the guide. But the Americans aren’t part of the organization, she said, adding that we’d come a long way. The soldier was stony-faced. The sun beat down on our heads. Meanwhile, other tourists were waved through the metal detector. Our guide explained to us that what the soldier was doing was illegal.

We are Jews from San Francisco, I found myself saying in Hebrew, realizing too late that this really wasn’t going to help with the objection to lefties. Not to mention that whatever authority I tried to assert by speaking the local tongue, the language of the Bible, had already been assailed in the airport.

But whereas the security agent was just doing her job, these guys were playing cat and mouse with us. I knew how to say we were Jews from San Francisco in Hebrew. What I couldn’t say was that I’d learned about the tomb before these soldiers had been born. How moved I’d been by the lives of the people buried there, oh, how I believed! But what mattered now was that I was the guest of this group promoting rights for all: no longer one of us.

To my outburst the soldiers didn’t react with suspicion or scorn—they didn’t even turn my way. But they finally let my husband and me through. The others stayed behind. Climbing the stairs to the ancient structure, I was trembling, and not with awe.

When we reached the entrance, the soldiers and their taunts seemed very far away. It still seemed possible that what lay ahead was what I hadn’t yet found: the Ma’arat Ha-machpelah of my Jewish imagination.

Image produced above is by Susie Cagle, licensed by Creative Commons.

Jason K. Friedman’s first book of stories, Fire Year, won the Mary McCarthy Prize in Short Fiction and was runner-up for the Anne and Robert Cowan Writers Award for Bay Area Jewish fiction.  The first story in that collection, “Blue,” won the Moment-Karma Short Fiction Contest and was published in Moment.  Friedman’s work has also appeared in The New York Times, The Gettysburg Review, The South Carolina Review, Mission at Tenth, and Jonathan. His work has been anthologized in Best American Gay Fiction, The Queer South, and the cultural studies reader Goth, and his story “The Golem” was Storyville’s story of the month.

April 26, 2016 Annie Spans the Gap, Part 1
Recent Comments
0 | Leave a Comment
Browse Our Archives
get the latest from
Catholic
Sign up for our newsletter
POPULAR AT PATHEOS Catholic
1