The Wounds of Resurrection 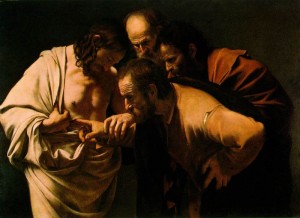 As my husband prepared for an Easter sermon a few weeks ago, our dinnertime conversations during Lent turned to Jesus’s appearance to the disciples after his resurrection, to the episode where poor Thomas is saddled with his unfortunate moniker. Carravaggio painted a terribly potent picture of Thomas probing Jesus’s wounds, his lord’s flesh curving over the doubter’s finger.

With its emphasis on suffering, broken bodies, deprivation, and wounds, Lent’s focus isn’t far from the realities since my father’s cancer diagnosis a year ago: surgery, chemotherapy, radiation, the failure of his natural killer cells.

When you have a loved one with cancer, you enter the cloud of unknowing, or perhaps it’s a club of unknowing, a society of those wedged in the grief and emotional confusion that a non-linear illness brings to all who are involved. In this club you might become more familiar with the less famed side effects of chemo like neuropathy and a sensitivity to hot or cold, with the comments people make in an effort at sympathy, or with the ebb and flow of sadness, guilt, and normal life.

Lent puts us in mind of those wounds and scars, of bodies failing, of death. But when Easter comes, and we celebrate resurrection, it sometimes feels like those wounds are mended too quickly. Or perhaps they were never really healed.

For my father, the idea of a resurrected body, as his falters, is good news. But I know it’s not the same for everyone. The proliferation of ideas about what happens after we die gives a different perspective of what some long for. If you Google “heaven,” the first hundred images are of a bright holy opening in a cumulonimbus cloud.

Searching for “life after death” bombards you with creepy pictures of ghostly figures disconnecting from their bodies. Maybe the soul floating up to heaven, at long last separate from the diseased material it clung to, comforts some people in a way that resurrection, or at least our vaguely Christian ideas of resurrection, does not.

Many Christians, if we think about resurrection much at all, tend to imagine our future resurrected bodies a bit Platonically: the best images of ourselves, at our most beautiful and healthy. But I wonder if that’s how it will be.

As I thought about scars and wounds during Lent, it struck me that Jesus’s resurrected body betrays the myth of our vague views of resurrection. Carravaggio was depicting a clearer version of a resurrected body: Jesus’s new body wasn’t whole and pristine, but riddled with scars and even open wounds.

St. Francis was the first known saint to receive the stigmata, a mystical bodily empathy with the wounds of the crucified and risen Christ. His friend Brother Leo, who recounted the story, was with him when they went to a mountaintop to pray and meditate, when the days of prayer lead to a vision of seraphs that left Francis with the gashes in his hands that would fester until his death.

When a fellow brother sought to pray for Francis, asking that his suffering be lessened, Francis quickly rebuked him and, though weak from his pains, got on his knees and prayed:

“Lord, I thank Thee for the sufferings Thou art sending me. Send me more, if it be Thy good pleasure. My pleasure is that You afflict me and spare me not, for the fulfillment of Thy holy will is the greatest consolation of my life.”

St. Francis was echoing Paul in Philippians 3, who, in his religious fervor, wanted to “know Christ and the power of his resurrection and [the] sharing of his sufferings by being conformed to his death.” Or as The Message puts it: “I gave up all that inferior stuff so I could know Christ personally, experience his resurrection power, be a partner in his suffering, and go all the way with him to death itself.”

The idea of being a partner with Jesus in suffering doesn’t make me as uncomfortable as it used to. It’s not that I have sought out suffering. On the contrary, I’ve tried to avoid it most of my life. But suffering comes to us whether we choose it or not. I would say it’s just part of being human, but that makes being human seem base, something to shrug off like the ghostly souls who leave their bodies behind.

If Jesus didn’t shrug off his suffering, maybe we don’t need to see our scars and wounds as things that need to be erased in the resurrection. N.T. Wright says that “the risen Jesus was more human, not less, than he was before.” For the abused and mistreated, the sick and dying, the anxious and depressed, our emotional and physical wounds, whatever form they take in resurrection, could be striking reminders that we are not less because of our hurts.

I wonder about my father in the resurrection. Will he have his surgery scars? Will St. Francis still have his stigmata wounds? Maybe this kind of resurrection is still not good news to everyone. Maybe it’s a horrifying thought, but I wonder if all of our wounds will be on full display and if we will examine one another like Thomas did, not in sick fascination, but as a way to see God’s glory in the prominence of our true humanity.

Caravaggio’s Doubting Thomas produced above is taken by Rodney, licensed by Creative Commons.

Christiana N. Peterson grew up in Texas and received a PhD in Creative Writing from St. Andrews University in Scotland. She has published pieces on death, fairytales and farm life at Art House America, her.meneutics, and cordella. She lives with her family in the rural Midwest where she is learning the joys and challenges of church and farm life. You can find more of Christiana’s writing on her blog at christiananpeterson.com and follow her on twitter.