The Strength of God’s Gaze 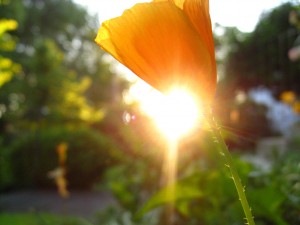 The first time I saw her, I made up a story about her, and it was all wrong.

This was in the autumn several years ago, when, in my third-time’s-a-charm attempt at entering the Catholic Church, I stumbled into Adoration each evening at my Capitol Hill parish. Here, in the cool of the day, God’s body gazed like a gentle eye from the altar while our priest heard confessions in the back, and the usual suspects—the older woman on whom I fixed a story, and an older gentleman in a bright blue windbreaker—beheld and snoozed, respectively.

Who was this older woman?

Seated in the shadow of a pillar, wearing a gray coat and a little gray cap, she was nearly invisible. I would have missed her entirely had I not glanced back on my way to my own perch, where I knelt on the floor near the altar. Her countenance glowed in an intangible way, as if she had swallowed a lit candle. Her eyes held an expression of unfurling desire and relief.

Each evening as I walked the side aisle, I stole a glimpse of her face.

The story I made up about her seized on two things: the strength of her gaze—which seemed to suggest a strong body and a sense of duty—and the strangely exalted fatigue it bore. I decided she lived in the neighborhood, close enough to walk to the church in her little cap and coat, and that Adoration was her refuge after a long day of caring for her own elderly mother.

The story kept me company for a few weeks of watching, and in some ways, I think it protected me from imagining a less favorable life for her—a life that, save for the glow of her face, might have tempted me to an unnecessary secondhand despair.

At the time, as I mused on all this, I recalled the counsel of a friend who once exhorted me to stop making up stories about every human being on whom my eyes fell. I see now that this friend was attempting to steer me away from the sin of curiosity: the desire for knowledge that does not belong to us or have any use in our lives, a kind of cousin to lust or gossip.

Because the older woman’s face was so captivating, I could intuit and almost taste, for perhaps the first time in my life, the falseness and inadequacy of the story that my curiosity had created for her. And I wanted to know her, as she truly was.

So one night I followed her out of Adoration and easily caught up to her walking pace, gentle and dainty with the pain of age, and I brightly asked her how she was. Her response was chilly and hawkish: all the gentleness drained from her face, and she gave me a sharp reply.

I tried this a couple more times before I gave up post-Adoration stalking and asked God if He would arrange a friendship for us. And He did, over the course of several years. It was a small-town, platonic courtship of the kind that Capitol Hill affords: crossing paths at the park, the post office, the coffee shop, the bus stop.

Eventually, when I saw her in the evenings at Adoration, she recalled my name and brought me clippings of poems she thought I might like. After a while, she let me walk her home to the sparse hermitage of her apartment and survey the books on her tidy shelf.

I discovered that of the details in that first story, I had gotten only one thing right: she did indeed live around the corner from the church, close enough that, in her younger years, she could have dashed from one portico to the next in about five minutes.

Last week, after years of my hoping, she finally suggested that we have dinner together after Adoration.

She insisted on paying, steered us slowly to the neighborhood Tex-Mex place, and promptly ordered a Miller Lite. There, in the worn-out bustle of a late happy hour, her God-lit gaze fell like a furtive blessing on my face, the scarred table before us, and the young Hill staffers teeming at the doors.

I recalled the moment when, at the close of every Adoration, the priest raises up the monstrance and presents God’s gaze to every corner of the church, with a solemnity that supposes the Host’s power to see, know, and probe every heart, with no appetite and no imaginings save those of Love.

Image above is by Jason Lander, licensed by Creative Commons.

June 9, 2016 The Best Conditions for Work
Recent Comments
0 | Leave a Comment
Browse Our Archives
get the latest from
Catholic
Sign up for our newsletter
POPULAR AT PATHEOS Catholic
1