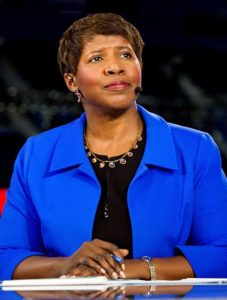 It is the blight man was born for
It is Margaret that you mourn for…
–“Spring and Fall,” Gerard Manley Hopkins

“I’m sorry for your loss,” my friend Dionne posted in response to a note I posted on Facebook.

I’d just come back on the redeye from the West Coast that morning, and stayed home from work to catch up on some sleep. I was puttering around in the kitchen in my nightgown, my mind in a fog, when I heard on the three o’clock newscast that journalist and news anchor Gwen Ifill had died.

I immediately called my husband, who was picking up the children from school, with the news.

Suddenly I felt even more at loose ends than I had on the morning after Election Day, stunned by yet another instance of how, overnight, the landscape around me had shifted. Except in this instance, the feeling of being unsettled hit me more forcefully.

Here’s what I posted on Facebook: “Memory eternal, Gwen Ifill. Our whole family will miss our Friday pizza nights with you.”

It didn’t occur to me until I saw Dionne’s response that it might appear that said Friday pizza nights might be with Ifill in person—as opposed to a picnic on Mommy and Daddy’s bed watching Washington Week.

And I wasn’t the only one: My friend Happy also posted a note that she and her family would miss watching Ifill, “even though we just knew her from TV.”

For the record, we mostly knew her from TV, too, from PBS’s NewsHour and Washington Week. But our collective family grief at her loss—“Oh, no,” my seven-year-old daughter said when I teared up, telling her the news—belies the conventional wisdom that we are all niche watchers now, tuned into our own solipsistic channels on our own private devices.

Instead, our crew has tuned to public television’s notoriously dry, unflashy news programs.

The notion of television as shared family celebration happened to us accidentally, when my son was born in 2004. I’d spent most of the twenty-five years before that being one of those people who talked about “never watching television,” not owning a television (and thereby missing out entirely on Seinfeld.) Indeed, I’d refined my penchant for listening to the radio in the dark, and reading until I was so tired that the print before me disappeared.

But it is hard to hold a book while breastfeeding, and so having a child in 2004 turned me back to the television watching that was ever-present when I was growing up. Only this time—since we didn’t have cable—it was straight PBS all the way: Friday nights we’d regroup at home after the week and pile on the bed for pizza, drinks, and NewsHour with Jim Lehrer, followed by Washington Week with Gwen Ifill (and even, sometimes, the Nightly Business Report with Suzie Gharib).

Time passed. (Cue deliberate reference to that wonderful interstitial section in Virginia Woolf’s To the Lighthouse, where the seasons and nature—and yes, the allusion to inevitably approaching death—are reflected in the Ramsey’s empty summer house.) George W. Bush was reelected, and the Iraq war droned on. My son grew round and walked. My husband and I bought a house in a majority-minority neighborhood. I became pregnant with another child.

Along the way, NewsHour host Jim Lehrer gradually loosened the reins of his control on the show, creating room for new hosts Gwen Ifill and Judy Woodruff to move in.

I think it was the summer of 2008 that I really began to follow Gwen Ifill: I was newly pregnant, thick in the haze of first trimester exhaustion, and I remember watching her moderate a panel of reporters at the Democratic National Convention in Denver. I loved that she could be as tough an interlocutor as needed, but unlike other top women in leadership in Washington, didn’t view being a warm, even sweet, presence as a negative.

I wonder now if that warmth, in addition to being a real part of her personality, was also a deft attempt to stave off the complaints about the “angry black woman” that successful black women almost inevitably have to face. “Paying the black tax,” I’ve had friends call it—and I started watching Ifill closely around the same time of the infamous New Yorker cover representing Michelle Obama as a militant.

I’ve lived in a majority black community long enough now to become keenly sensitive about the stereotypes that still get regularly imputed to black professionals. As my white daughter was born and grew, I loved the fact that she was able to count Gwen Ifill as a role model of the kind of woman she might herself become some day. (She even asked, one time, if Gwen Ifill might be the special guest at her birthday party, a request I wish I’d tried harder to honor.)

And lastly, there was also the fact that Gwen Ifill and members of my family all worked in the news business here in Washington. My husband interacted with her in Denver while I was home watching the convention on television.

Say what you will about people who live inside the Beltway not being part of the “real world,” but all of us who’ve worked together, often for very long hours under exasperating circumstances, feel that same tribal kinship others elsewhere share with their compatriots. So even though I didn’t know her as a personal friend, she was nonetheless one of us.

But what it all comes back to, in the end, is her warmth. That Gwen Ifill could bring intimacy to a television newscast, even in these times—well, I would count that as a miracle.

Not just intimacy, but also Love. Love shone through her as she did her work. And I miss it, and her, so.

The above image is by PBS NewsHour, used with permission under a Creative Commons license. 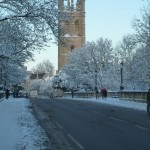 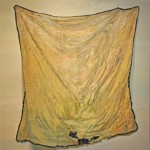 December 20, 2016 Kathleen Wakefield's Invisible Stenographer
Recent Comments
0 | Leave a Comment
""It doesn’t matter when you start the Sinatra Christmas playlist or put up your tree. ..."
C_Alan_Nault How to Win the War on ..."
"Yup."
Max Marvel Finding My Inner Calamity Jane
"I an confused by the use of "aural" here: "In The Gutenberg Galaxy, he explained ..."
William G II The Gutenberg Imagination
"My friend is looking for a Pepper Smith he served in the army with, was ..."
Christine Budnack The Love Song of Pepper Smith
Browse Our Archives
get the latest from
Catholic
Sign up for our newsletter
POPULAR AT PATHEOS Catholic
1