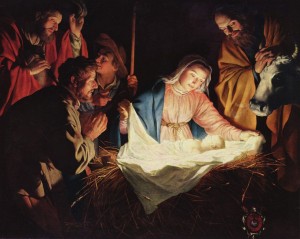 I’ve heard many people say we’ve never needed poetry more than we do now, but “Advent,” by Bruce Bond, reminds me that poetry has always been vital. The poem begins with a bombing in the Yellow Sea and smoke so thick “you cannot  see your hands,” which sets the reader up for a domino effect of disorientation. This disorientation is reinforced by clever line breaks and images that seem to lean into one another—the earth’s tilt on its axis becomes a man lost in thought, folks sleepily sitting by the fire become “cows in the crèche,” yesterday becomes tomorrow: “the farther back you go/the more it dims into a future.” A holy day becomes ordinary: “so long past / it could have been most any season.” Another dimension of this disorientation comes from lines that seem to have been written just yesterday, although the poem was published five years ago. Consider: “talk that turns bitter as it grows more national in scope.” When the swirling, otherworldly tone of the poem introduces images of Advent (“A child is born / crowned in blood”), the reader encounters an Advent story more frightening and more alluring than the one usually on display in this month of ubiquitous manger scenes. “Advent” highlights the strange beauty of this season, and reminds us that we have always, and will always, need poetry—to shake the dust off our stories and help beauty “bloom through the wound.”

On an island in the disputed region
of the Yellow Sea, blooms of smoke
from the shelling of the garrison
weave into one bloom, one force of nature
so thick, they say, you cannot see your hands.
The planet, we know, tilts on its axis
like a man contemplating a problem,
spun toward the horizon of another
year, always forward, across a winter
where we celebrate an advent so long
past it could have been most any season.
Islanders will tell you, the farther back
you go the more it dims into a future,
the one we carry like a grudge or gift
to lay at the threshold of a child’s bed.
Nights when the cold draws its curtain
on our homes, we turn to the windows
of TVs and stare, alone with the war
and its commercials, the firestorm
that breaks a motherland in two like bread.
We too break, each year a little more
divided at heart as we cough by the fire,
still and sleepy as cows in the crèche,
thinking it is one thing for a king
to kneel, another for him to seek advice.
The modern kings do not wander far

into the desert, but tend to sit and watch
the monitors fill up with falling lights.
Facts are hard, like the man who buries
his hatchet in the turkey he shares
with a neighbor, with talk that turns bitter
as it grows more national in scope.
Say I am the offspring of the thought
I just had, flesh of its flesh, and so
different, in some measure culpable, free,
as anything alive. A child is born,
crowned in blood, and we lighten up.
Sure, we see it every day, and yet
this day, tradition says, is unlike any,
which is true. It has never happened,
and never will again, over and over
the will to be reborn, to gasp and cry
forgiveness, that is, like birth, difficult,
scared, insurgent, brave with the stranger,
the winter child, that blossoms through the wound.

Bruce Bond’s collections of poetry include The Visible (Louisiana State) and Choir of the Wells(Etruscan). His poems have appeared in Best American Poetry, Southern Review, Virginia Quarterly Review, Georgia Review, The New Republic, and Gettysburg Review. He has received fellowships from the NEA, Texas Institute of the Arts, and Institute for the Advancement of the Arts. He is a Regents Professor at the University of North Texas and poetry editor for American Literary Review.

The above image is by Gerard van Honthorst, [Public Domain], via Wikimedia Commons 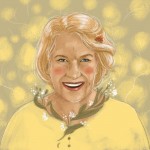 December 12, 2016 Stopping the Press
Recent Comments
0 | Leave a Comment
""Aural" refers to hearing, "visual" to seeing"
merphd The Gutenberg Imagination
""It doesn’t matter when you start the Sinatra Christmas playlist or put up your tree. ..."
C_Alan_Nault How to Win the War on ..."
"Yup."
Max Marvel Finding My Inner Calamity Jane
"I an confused by the use of "aural" here: "In The Gutenberg Galaxy, he explained ..."
William G II The Gutenberg Imagination
Browse Our Archives
get the latest from
Catholic
Sign up for our newsletter
POPULAR AT PATHEOS Catholic
1