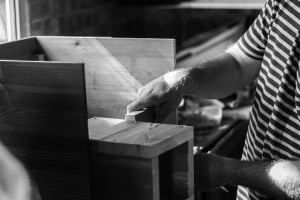 A delightful scene is set in this poem. At the start of the new year, the speaker and some friends are doing volunteer woodwork to repair their church’s altar. As the speaker details the steps of their careful work, we’re carried along by the poem’s base rhythm of iambic pentameter. Soon religious language enters the speaker’s account: as their sawdust fills the church, they feel their labor to be “sanctified,” and the motions of their attentive work become a “ritual.” Though they’re amateur carpenters, they strive for “such perfection / as can be achieved on this job, in this lifetime.” Then, taking a break, they recall that their “patron in this place” (who is Jesus, though he’s not named) was a carpenter. But Jesus’ carpentry immediately becomes symbolic. Paintings of him at work, “a long shaving furled / round his wrist,” holds in its grain “the meaning of life and death / and pretty much everything in between.” As carpenter, they muse, could Jesus have made anything “less then perfect?” The scene then shifts, for the poem’s final stanza, back to the church that the speaker and his friends are working in. “The incense of our craft” will linger in the sanctuary during Sunday worship. And this, the speaker concludes, is all the payment they need: “an answered prayer for good work, done.” This “good work,” here and in the poem’s title, carries a double meaning: it’s work well done, but also morally good work—like that of Jesus.

The tools of the trade lay scattered on the floor
below the altar, migrating to its surface
(protected under plywood and a cloth tarp)
only after the first few days, when the fine mist
of wood dust that settled over the pews and furnishings
helped us to feel more at ease in this space
now sanctified to our labor.
Church interior as worksite.
I can think of worse ways to begin the year.

Moving through the motions of ritual
attendance to table saw, miter saw
in mindful repetition, alert, thinking
only of the blade, the cut, its closeness
to the mark, each length and angle made
to match another, to join in such perfection
as can be achieved on this job, in this lifetime.
And it’s always fresh cut to fresh cut,
and there’s something to that, but I can’t think what.

A question formed itself as we chewed cuds
at break time, prompted by the vaulted ceiling
and the heartfelt volunteer labor
of the two who started this project, who made
not a complete botch, but thank God
had no chainsaw handy to trim the wainscot.
The question? Ah, yes: our patron in this place,
was he a finish carpenter, or rough?

A lot of fancy woodwork’s been performed
on his behalf. The romantic version has him
leaned over a plank, his two hands gripped
on a bench plane, a long shaving furled
round his wrist: the scroll that we apprentice-priests
of woodcraft must uncurl, to read the grain
wherein lies hid the meaning of life and death
and pretty much everything in between.

Did he enjoy the fine work or prefer
to hammer studs; to kiss that sixteenth of an inch,
or was close enough good enough?
What were his tolerances, professionally?
Could he make it less than perfect? Did he measure
once? And how did he balance the desire to do it well
with the need to get it done?

These and other questions will be answered
Sunday morning by his current rep,
who’ll stand behind the pulpit we’ve restored,
after we’ve packed our tools and collected and swept
the scraps and shavings and vacuumed up the dust.
And later we will hear that the incense of our craft
and labor lingered in the sanctuary air that day,
as answered prayer for good work, done—
which is all we need to know, and answer enough.

John Terpstra is a poet whose most recent collection, Brilliant Falls, won the Hamilton Literary Award, and a nonfiction writer whose most recent work is The House with the Parapet Wall(both are from Gaspereau Press). He has been short-listed for both the Governor General’s Award and the Charles Taylor Prize and is, by trade, a furniture-maker.

Above image by Just Bens Photos via flickr, used with permission under a Creative Commons License. 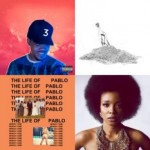 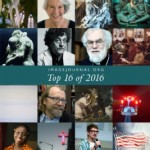 January 2, 2017 Poem for the New Year: “In the Candleroom at Saint Bartholomew’s on New Year’s Eve” By Heather Sellers
Recent Comments
0 | Leave a Comment
Browse Our Archives
Follow Us!