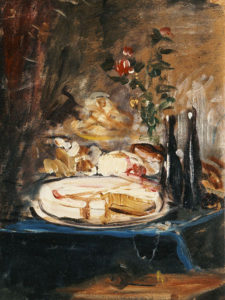 My heirloom cookbook was born during a Washington D.C. snowstorm in February of what was then called “The Year 2000,” in my final months of singlehood before I was to be married in July. That storm barely registers in the city’s memory now: it was neither the Blizzard of 1996, with its eight-foot-high snowbanks, 2003’s freak President’s Day storm, nor was it the incomparable Snowmageddon of 2010 (which I wrote about on Good Letters).

However, the storm in 2000 was significant enough—knee-high drifts under a gunmetal sky and the threat of more on the way—that work was cancelled for two days, and my roommate Paula and I lounged around the apartment filled with snow-glare-white light, drinking wine, ordering pizza (somehow Domino’s still delivered), and watching the first season of Survivor with her boyfriend Johan, who had crashed at our place for the fun.

The second night we were housebound, Paula—a tall, raven-haired engineer originally from Bogotá—announced that she was going to bake a cake. Not just any cake—I, for one, was raised on Betty Crocker—but her Colombian grandmother’s homemade white cake. She went into the kitchen, and once she ascertained that, amazingly, we did have the many eggs and flour and baking powder and mountains of sweet cream butter required, began to separate eggs with the acumen she brought to technical drawing.

Paula beat a sweet yellow cake batter that, once it was poured carefully into floured cake pans, smelled high and sugary in the heat of the oven. The remaining egg whites she beat into thick stiff peaks, to which she added sugar until she’d beat a glossy meringue frosting—her grandmother Sophia’s treasured batido blanco—that held its shape when twirled with the back of a spoon. Once the layers were out of the oven and safely cooled, she sandwiched a layer of jam between them, and spread this thick luxuriant icing all across the top.

As eminently serious as always, Paula obliged with a typed multi-page and five-part list of instructions when I asked her for the recipe, and carried it as a bride into the first kitchen of my marriage. A year after that, Paula married Johan, in her own long dupioni silk skirt, wearing my simple tulle veil. (And now we each have two children and get to see one another perhaps twice a year.)

But I didn’t record the recipe for Sophia’s White Cake in my own hand, not until 2003, when I purchased a volume called The Dowry Cookbook by culinary professor Cynthia Salvato, designed to replicate the family recipe books given to Sicilian brides. The hardbound volume interspersed some of Salvato’s own recipes with gold-edged blank pages for creating a cookbook of one’s own, or one to give. While I was not Sicilian and had no major family recipes of my own to speak of, I had other recipes to remember.

Chief among them: the pecan ball cookies made by Mrs. Georgia Pistolas of Saint Sophia Greek Orthodox Cathedral. She’d worked in dentistry and been a business owner and had ended up in the finance department of the Republican Party, a tall, elegant and unfailingly kind woman who made these cookies for the Ladies’ Philoptochos Society Annual Tea as though they were tiny versions of Greek kourambiedes cookies, covered in powdered sugar and carefully arranged in mini-muffin cups on a fluted sterling-silver tray. Two years ago, I cried at her funeral with my surprise baby in my arms.

There’s also a delightful quick salad that was served by my friend, the writer Gina Bria, on a hot New York Sunday overlooking Riverside Drive: Salad: honeydew and blueberries tossed with lime juice and fresh mint.

I’ve been criticized about being essentialist on gender issues before, but it strikes me that there is something irreducibly female here about the ways emotion and longing get wrapped up in recipes and their transmission.

Most of my friends and I have husbands who typically do far more of the everyday cooking than we do: they are the wielders of the peppermills, the pourers of long draughts of balsamic vinegar from Modena. But they do not, for the most part, do sugar. Or icing. Or edible preserved flowers, or petits fours monogrammed with the initials of the bride.

A couple of years ago, my then-new friend Jehan hosted a party for another female friend who was facing an imminent health crisis. The centerpiece of the stunning table was Sparkling Rose Punch, in which floated pink rose petals and crystals of ice.

I copied the recipe down as I was still drinking the punch, and in the tradition of these female legacies, I offer it here. Watch out—it’s potent.

Years later, our friend continues to flourish. In another couple of weeks, Jehan will herself be married, and I send her prayers and good wishes.

“We all deserve some sweetness in the end,” writes Susan Wood in a poem from her 1991 collection Camp Santo.

Blessings to Paula and Jehan and memory eternal to Georgia. I send the treasures of these recipes onward. Lord have mercy on us all.

This post was originally published on “Good Letters” on June 5, 2012.

The above image is by Gyzis Nikolaos, [Public Domain], via wikimedia commons. 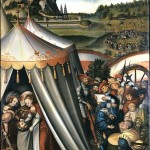 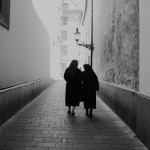 February 15, 2017 Anne Fontaine's The Innocents
Recent Comments
0 | Leave a Comment
Browse Our Archives
get the latest from
Catholic
Sign up for our newsletter
POPULAR AT PATHEOS Catholic
1