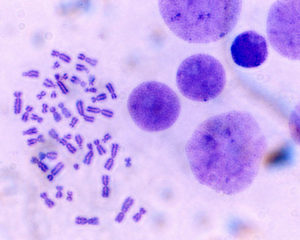 I recently found remnants from college and grad school genetics classes: karyotypes—sheets of paper with photos of chromosomes clumsily glued to their forty-six places. My professors would usually hand us an envelope filled with tiny chromosome photos on Friday to be assembled over the weekend. I sat in the sun on Saturday afternoons, poring over their individual structures to find where they matched and fit, trying not to exhale too deeply, lest I lose some genetic code forever.

I’m fascinated by blind spots, by everything I look at over and over again without truly seeing. Science sometimes feels like a lovely game of encountering an idea once invisible combined with a near-constant state of being wrong. Although, the practice of science requires immense faith in the implausible fact that a trajectory of error will one day lead to truth.

Walking home from the bookstore several evenings ago, I was in a good mood. I take photos as I walk, because I like having a record of the felt experience that the world is different in very small, almost unnoticeable, manners each day.

But I almost never look at the photos. It’s too sad somehow to see everything changing, things being lost or replacing what I’d come to love through observation. The act of making the image and capturing time is what’s meaningful for me.

And then I saw the old man’s house. I’ve walked past the bungalow nearly every day for the past five years, watching his son bring him dinner or looking at the lights on the very fat Christmas tree the old man put against the living room window. But that evening, the house inside was lit by fluorescence and gutted down to exposed beams and insulation with a realty sign out front.

I didn’t know the old man’s name, but I knew him by his form walking each morning from Mass at Saint Thomas More with a prayer book in his back pocket. One side of his body was rounded over in a pronounced hunch as if he were always ducking sideways to pass through a low arch, left shoulder nearly meeting his left ear.

And I knew him because he was the only person in the neighborhood who had a “Vote Yes: Keep Marriage Between One Man and One Woman” sign in his yard when the same-sex marriage amendment was on the Minnesota ballot a few years ago.

The amendment caused much pain among people who had to watch their neighbors and friends vote on the legitimacy of their unions. I didn’t like the old man’s ideology, but I loved the view of his shoulder and his little book, the pained softness of him. He used to walk with his wife, who walked more briskly than he and carried a pocketbook similar to my grandmother’s, which was beaded and made in West Germany.

When I no longer saw his wife, it was hard not to make assumptions. I thought—perhaps too imaginatively—that he liked the marriage slogan because he had suddenly become one man without the one woman who could solve for the other side of his equation.

And now he’s missing—or, at least the images of him that made their way into my life as a habit of seeing have disappeared.

I’ve heard arguments that photography is a way of distancing oneself from the world (especially if one is a young woman and the lens is harbored by a phone), and it seems, unlike other visual arts, often the act of photography is viewed as disrupting sacred spaces or as a way of snidely turning down the full experience. A distraction.

Yet photographs and how we view them informed much of the past century’s genetic research. Images, instead of being content to illustrate an idea or appeal to a visual sense, actually made knowledge.

In 1956, karyotypes displayed in the photomicrographs of Joe Hin Tjio and in camera lucida drawings made by Albert Levan revealed that humans have forty-six chromosomes, instead of forty-eight as was previously thought. Mountains of in-progress research had been discarded up to that point as scientists came up two chromosomes short and thought their karyotypes were incomplete. What had been described as missing was there in its entirety all along.

And you might think, how? How can you look without seeing? How can you be wrong over and over, vision muddied by preconception?

Karyotypes rarely make their way into conversations outside genetics labs. It’s the phenotype that’s so interesting, the way that chromosomes are expressed while shaping the body. Phenotype explains why humans are so genetically similar to chimpanzees yet look so different.

Expression never conveys the full meaning. Meaning is hidden behind forty-six doors, and also nowhere near them. It’s simultaneously a savior and the worst kind of horror: the way we walk around with all of our meanings largely hidden behind a physical form.

I heard someone say once that to describe something as missing implies that you are looking for it.

My father taught me that God is love and also something around which you spend an entire life revolving. And as you revolve, you see each human’s face appear. This is why love needs art to continually produce images: beautiful, sacred, ugly, wrong, wonderful, profane, constant images. It is because, if God is a passing glimpse of everybody, then to love is next to impossible.

I’m terrified of anger and ideology, of one day rejecting everything and being unable to live in my world. I feel I am often angry at ideas seen from a distance. When it happens, I shake my head, and say It’s so easy to hate you from here, and then I go outside and take photos and walk and watch people try to solve the equations for lost things, for a God whose many faces seem often to be missing.

Above image from the archive of Josef Reischig, edited and used with permission under a Creative Commons License. 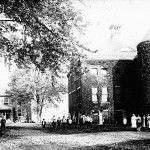 March 7, 2017
An Interview with George Saunders, Part 2
Next Post 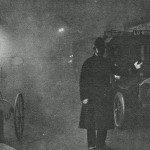