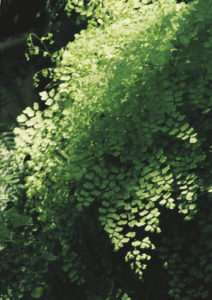 I admire the way this poem speaks indirectly to the incomprehensible loss of military life through direct imagery from the natural and domestic worlds. The speaker’s civilian perspective here is captured in a swirl of motion and silence made audible: the mouths of flowers are not real mouths, and yet their blooming right in the beginning of this poem creates a picture of the spectator’s sense of meaninglessness and helplessness in absorbing a casualty report. What can one possibly say? What sound is possible in response to death that comes too soon? This is where the poem leads, with its haunting recurrence of “letters”—correspondence, words, names. It follows the line of the speaker’s sight from television screen outward into a day that keeps going, filled with life and possibility, and toward the hope of meaning in the final stanza.

Names of killed troops scroll on the screen
and an opening peony mouths the mute sound
of letters flapping beyond the window pane.
A thousand messages script the air
while I let out a bee razzing at the window.
His furred back bobs away
like a small cycling postman.
White letters of silence overflow
his sack, flying letters I can read
only as they wing away and I puzzle
the heft of this unworded day—

Day greens like a parrot, swarms
in an incomprehensible flow. I skid the surf
of exploding verbs. Last night I heard hints of the coming
day in a branch tapping on a drainpipe.
What matters is the letters
delivered in the space after the period.
A message clear beyond the wavering
glass: love-alone, love-alone.

November 16, 2017
A Feminine Corollary To Machismo? Part 2
Next Post 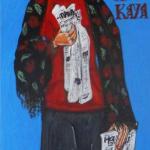