The Liturgy of the Stars: Part 1 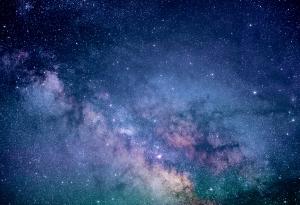 Growing up as I did amidst the dazzling lights of New York City, it is strange that even as a small child I was madly in love with the stars. The city’s glare effectively canceled out the night sky, admitting only the rare glimpse of the brightest heavenly orbs. Beyond the moon and Venus, you’d be lucky to spot Sirius, Vega, or Rigel—or constellations other than Orion and the Big Dipper.

But what the artifice of the city may have taken from my perception of nature it restored in the form of the Hayden Planetarium. It all began when my mother took me to the Museum of Natural History, where the planetarium is housed, and we soon fell into a pattern on our return visits. This was the 1960s, decades before the Rose Center was built. The dramatic sphere-within-a-cube that you can see on Central Park West today was yet to be. You simply passed through a nondescript gate into the planetarium section of the museum.

There I remember moving through the various exhibits: running my fingertips over a huge iron meteorite that looked like a human brain, stepping on scales that told me what I would weigh in the gravities of the other planets. I’d puzzle over various models of the solar system, trying to understand counterintuitive phenomena like the retrograde motion of the planets in the night sky and the precession of the equinoxes.

Now it was just a matter of the clock ticking down until the next sky show, our ultimate destination, the Holy of Holies. This was held in a large circular room surmounted by a dome. At the center was another circular area containing technical equipment. As the lights dimmed, a strange-looking device rose from that central zone: the Zeiss Mark IV projector. Mounted on a sturdy tripod, the projector consisted of a large bar with spheres at either end, from which shone the lights on the dome representing the night sky.

The room would go completely dark, except for the faint glow of the four exit signs at the points of the compass. We leaned back in our seats to gaze up as the stars began to emerge on the dome above. In the hush that descended, the sound of crickets could be heard: now we were out in the country, the place where true darkness could still be found and the full glory of the heavens swam across the sky each night.

This might be science, but to this child it was also poetry.

It is no exaggeration to say that those moments in the planetarium came as close to an experience of true worship as any I had known. The plain, white interiors of the Christian Science church my father took us to were no match for the liturgy of the stars.

A couple of years later, after we had moved out to Long Island, I got my chance to lie on my back in the grass, gazing up. Here was an image of infinity. It seemed to beckon to me, and it evoked such a longing that I thought my heart would explode.

What was it, precisely, that I desired? To say that I wanted to explore outer space sounds wrong, a diminution of something purer and more primal. I wanted to somehow reach out and become one with it—though put that way it seems both absurd and sentimental. Even as a youth I found little inspiration in the phrase “outer space.” Better to call it the heavens, or the even more haunting firmament (yet another linguistic gift from the generous bounty of the King James Bible).

When I eventually read C.S. Lewis’s space trilogy I experienced a shock of recognition when I came across this passage describing the protagonist’s journey to Mars:

But Ransom, as time wore on, became aware of another and more spiritual cause for his progressive lightening and exultation of heart. A nightmare, long engendered in the modern mind by the mythology that follows in the wake of science, was falling off him. He had read of “Space”: at the back of his thinking for years had lurked the dismal fancy of the black, cold vacuity, the utter deadness, which was supposed to separate the worlds.

He had not known how much it affected him till now—now that the very name “Space” seemed a blasphemous libel for this empyrean ocean of radiance in which they swam. He could not call it “dead”; he felt life pouring into him from it every moment. How indeed should it be otherwise, since out of this ocean all the worlds and all their life had come? He had thought it barren: he now saw that it was the womb of worlds, whose blazing and innumerable offspring looked down nightly even upon the earth with so many eyes—and here, with how many more! No: Space was the wrong name.

Everything about the cosmos has seemed to me pregnant with metaphor, starting with gravity. Much later in life I would read Saint Augustine’s phrase Pondus meum amor meus: “my weight is my love.” That is, my love is the gravitational force that guides my movements. I’d find an echo of that in the line that ends each section of Dante’s Divine Comedy: “the love that moves the sun and the other stars.”

This post appears as the editorial statement in issue 95 of Image and will be continued tomorrow. 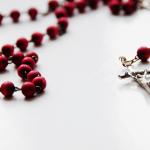 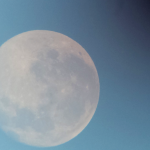 February 13, 2018 The Liturgy of the Stars: Part 2
Recent Comments
0 | Leave a Comment
Browse Our Archives
get the latest from
Catholic
Sign up for our newsletter
POPULAR AT PATHEOS Catholic
1