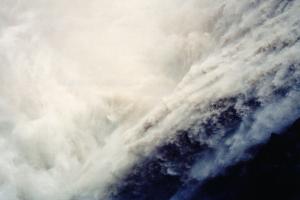 Lot’s wife, or what’s left of her, stands in the barren wilderness outside Sodom waiting to trip up any who would skip merrily through the Old Testament, seeing God only as creator, provider, and oh-so-merciful father. It’s no wonder that so many poets—with their obnoxious preference for the prophetic—have invited her into their lines to ask readers to slow down, not to smooth her grainy surfaces. Amy McCann’s “Salt Wife” curates the ambiguity of this woman, forcing the blunt mineral fact of her condition to grind against our easy dismissal of her choice.

The first word carries all that freight. She’s been “cured” by God’s rightful punishment—or, no, that’s not it…she’s been salted, preserved just as she is with her “permanent gown.” She’s a standing salt lick, left out there to crimp lips that seek a bitter taste. She is a temptation, though not in the clumsy fashion of Eden’s apple or Delilah’s lap. She becomes for us the embodiment of the very desires that drew her gaze.

Her past—the “flagrant” city—are all in her background. They are “behind” her. If we aren’t careful, we will mistake that for forgetting. We will believe (like Lot) that to put something behind us is to have moved away from it, to have escaped its gravity. But this city, all the more powerful in its absence, lies behind her every thought and act, the driving force that has “sustained” her.

The final line addresses the reader directly, offering us her own fate, less as a warning than an offering. After all, we all harbor our own desires for “deciduous places.” The taste of drowning is just the honest price we pay for the kiss.

Cured to permanent gown, a mineral
seep—all tears, all weep. The lick I am.

The lips I’ll crimp in the swap
of elements—the more of them,

the more I melt. My backdrop
old smoke in the shape of tents,

my city most flagrant in absence—
gutted cavity under the stilted SOS of stars.

I have been sustained by distant fires.
I have harbored desire for deciduous places.

I put everything I loved behind me.
If you kiss me, the taste of drowning.

Amy McCann’s debut collection, Yes Thorn, was published by Tupelo Press. Other recent work has appeared in the Kenyon Review, Gettysburg Review, and West Branch. She lives in Minneapolis and teaches writing at the University of Northwestern–Saint Paul. 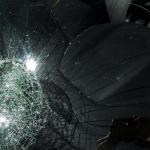 May 17, 2018
Monasticism in Lockdown America: Part 1, Cloister
Next Post 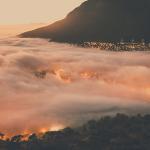 May 21, 2018 The Incredible Hulk Meets Queen Divine Justice: A Fable
Recent Comments
0 | Leave a Comment
""It doesn’t matter when you start the Sinatra Christmas playlist or put up your tree. ..."
C_Alan_Nault How to Win the War on ..."
"Yup."
Max Marvel Finding My Inner Calamity Jane
"I an confused by the use of "aural" here: "In The Gutenberg Galaxy, he explained ..."
William G II The Gutenberg Imagination
"My friend is looking for a Pepper Smith he served in the army with, was ..."
Christine Budnack The Love Song of Pepper Smith
Browse Our Archives
Follow Us!