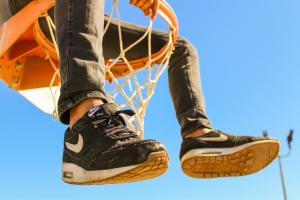 When I bought the shirt, I didn’t think much of it. It was for workouts, something practical and utilitarian.

I am smitten by all sorts of athleisure–have been ever since I saw my first pair of Air Jordan’s decades ago. I could never afford them (or any of the other shoes, shirts, or basketball shorts I coveted), so instead I dreamed about the day when I could roll through my life wearing a fresh pair of Jordan’s, some Umbros, both paired with whatever cleverly worded Nike shirt was hot that season.

So this was history and nostalgia and perhaps even destiny at work as I stepped out of my car and walked through the shushing automatic doors of the big-box sporting goods store. When I saw the shirt from across the store—“ATHLETE” written boldly across the chest—I thought, “Oh yeah. I’m going to rock the shit out of that.”

I didn’t expect the look on my wife’s face when I modeled the shirt later that evening. You know, casually. Just seeing how it fit. Her eyes went from my chest (ATHLETE) to my eyes, and then back to the shirt (ATHLETE) as she tried to suppress a smile.

“What?” I said, immediately feeling self-conscious.

“Nothing…” She laughed, not unkindly, and waved her finger in the air like a wand. Like it would help her conjure what she wanted to say.

To her credit, my best days as an athlete happened long before I met my wife. She saw half-hearted attempts at ultimate Frisbee. Limping through the intramural basketball season during Divinity school. But through high school and college, sports—being an athlete—defined me. Admittedly, in both good and bad ways.

I was fast, good with a ball. I was effortless on fields and courts and mats, unlike every other part of my life. But it also turned my mouth into a weapon, hurling so much trash it’s amazing I never caught a beating. It connected me with friends I still have today, as well as teammates and coaches who made me feel inadequate and taught me to hide my personality and intellect for longer than I like to admit. And to this day, I am innately and, at times, unhelpfully competitive.

Playing sports didn’t always bring out the best in me, but it was fundamental to my life. I would spend hours on the basketball court, playing whoever showed up. And even if nobody came because of minor difficulties like snow or bitter cold or “going to the homecoming dance” I would be there until the sun went down, putting up shot after shot. Dreaming of the day when all this work would be useful. When it would all pay off. And it did. I played college basketball for a minute until injuries and (ahem) my own inability to go to class submarined what could’ve been a lot more.

Basically, I can’t say I regret sports—being an athlete. But my wife wasn’t around for any of it, and the way she was looking at the t-shirt told me all I needed to know.

“Listen,” she finally said, realizing that I was about to make this a thing, “If you like it, wear it.”

If we were going to bring math into this, the numbers weren’t pretty. I’d been out-of-shape and overweight longer than I’d been athletic. The scale had tipped in the favor of sloth about five years ago. But the definition of identity requires a certain amount of—I don’t know—essence that makes me wonder if certain things are immovable. If, maybe, we are always able to access certain parts of ourselves, even when they seem to be long gone.

Theologically, there’s significance in remembering. We’re asked to do it in the communion liturgy, on All Saints Day, Easter, and Christmas. What does it mean to reclaim something? To believe that dead things can come back again?

I could’ve spent the rest of my life out of shape and nobody would’ve faulted me for it. Hell, I often remember how easy it was to eat pizza and Nutty Bars, never even thinking about the gym. Despite the amount of time I spent not being athletic, the feeling (like much of my clothing, if we’re being real) never fit. There was always something in the back of my brain, or perhaps it was deeper—at the soul’s level—that kept reminding me of who I used to be.

However, the act of remembering isn’t simply about who we used to be. It’s alive, something that’s real and present in our lives right now. At the risk of being cheesy, it allows us to become who we are.

So I wore the t-shirt to workout, ignoring the way my wife’s eye kept cutting to it. The way she would smile. And when I walked through the doors of our gym that first day, watching as my friend Richard’s eyes read the shirt (ATHLETE), I readied myself for a round of high-level trash talking.

Richard played pro football and he trumps me on the treadmill and in the weight room and (most importantly) whenever we get to talking about the glory days of football and basketball.

Instead, he smiled—differently than my wife—and said, “Nice shirt. I need to get me one of those.”

Bryan Bliss is the author of the novels Meet Me Here, No Parking at the End Times, and We’ll Fly Away, all with HarperCollins. He holds graduate degrees from Seattle Pacific University and Vanderbilt Divinity School. He lives in Saint Paul, Minnesota, with his wife and kids.

About Bryan Bliss
You can read more about the author here.
Previous Post 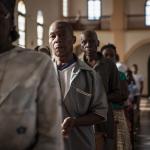 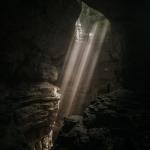 August 29, 2018 Caves of Wonder
Recent Comments
0 | Leave a Comment
""It doesn’t matter when you start the Sinatra Christmas playlist or put up your tree. ..."
C_Alan_Nault How to Win the War on ..."
"Yup."
Max Marvel Finding My Inner Calamity Jane
"I an confused by the use of "aural" here: "In The Gutenberg Galaxy, he explained ..."
William G II The Gutenberg Imagination
"My friend is looking for a Pepper Smith he served in the army with, was ..."
Christine Budnack The Love Song of Pepper Smith
Browse Our Archives
Follow Us!