Catholic Thriller Week: The Death of a Pope by Piers Paul Read 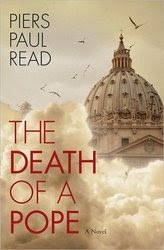 It is not often that I receive a book around 1:00 in the afternoon and finish it by 10:00 the next morning. This thriller was compelling enough to keep me reading at every opportunity so that I did precisely that.

Juan Uriarte, a former priest known for his compassion for the marginalized in third world countries, is on trial in London for terrorist activities. The trial is covered by reporter Kate Ramsay who is worried about her career and decides to cover Uriarte and his work in Africa among AIDs victims.

The story moves from London to Rome, Rome to Africa, Africa to Egypt, and onward. As it does, the cost in suffering and lives that is perceived as the result of practicing the Church’s policies is hotly debated. Set during Pope John Paul II’s last days and during the uncertain times of the papal enclave that followed his death, we also see the unease of conservative and liberal priests as they wonder where the future of the Catholic Church lies. This is not as forced as it might seem since practically all the characters have had something to do with the Catholic Church at some point in their lives. Practically every hot button issue of modern times in the Church is touched upon. More importantly, it is necessary to the plot that the reader has some understanding of these issues.

Gradually, the seemingly disparate threads are brought together by a terrorist plot involving blackmail, subterfuge, and mass murder. The result is a fast paced book that pulls the reader into a world where terrorists are willing to do anything to support their cause.

Although I personally enjoyed it when theological issues were raised, at one point I had to pause and ask myself if this was limiting the book’s appeal to a more general audience. It took only a brief reflection to decide that the answer was “no.” Indeed, switch the religion from Catholicism to Islam and I’d have been eager to get such an impartial view of both sides for issues in that faith. Likewise, thinking of the many spy thrillers I’ve read, up to and including the first ever spy novel The Riddle of the Sands, I realized that authors must always educate the audience with special insider knowledge germane to the plot, ranging from yachting to cold war Berlin to the politics of the Catholic Church.

The book is interesting because it works on several levels. At the surface it is a good spy thriller. On a deeper level it presents arguments for both conservative and liberal Catholic social thinking. Most interestingly, the author presents rounded out characters in these discussions so that there usually is no “good” or “bad” guy, but simply people who all have the best motives in mind and who are trying to act truly on those motives to do good. Of course, not everyone has such pure motivations but then again this is a spy thriller.

On a still deeper level, the reader has plenty of food for thought in the basics of good versus evil, on how easy it is to twist facts to serve one’s own purposes without even realizing it, on trusting God versus trying to force events, and much more. At the base, one finds the most basic issue of all for contemplation: when does one move from discernment and a relationship with God as a person to thinking about religion and our own agendas as a goal. One realizes that one of the most likable and successful people in the book is a Secret Service agent who doesn’t give a flip about faith. However, by being true to his calling and honestly adhering to the truth as he knows it, he is being more faithful to God’s will in a very real sense than someone who has agonized about it for a long time.

The book is not perfect. It is written in present tense which annoyed me every time I picked up the book. Luckily I was soon able to ignore that oddity because the story was so compelling that I would forget about it. However, I happen to agree with Orson Scott Card’s assessment of such a quirk when he says (not about this book), “This does nothing but add a needless layer of falseness to the story — when we want to tell something important and true, we always tell it in past tense. That’s how English works…” I sincerely hope that this is not a habit of Read’s as I plan on seeking out more of his books.

Another imperfection arose when there was a particular conversation between two characters about halfway through which essentially laid out the raison d’etre for all following actions of the suspect. Although I felt proud to have spotted it, it only took a moment’s reflection to realize that I am not really clever enough to spot such things until after all is revealed at the end. At that point I am usually resignedly retracing the storyline to see where I was led down a false trail and where the real clues were subtly dropped. I readily admit that this actually may have been due to my too thorough reading of the book jacket which hints of where the action will lead. Such hints on jackets should be banned. However, I also feel that as we are on “high alert” mentally by that part of the book there is a good chance that the conversation is dropped in with a topic that is offbeat enough to draw the reader’s notice unnecessarily. That is not to say that such advance certainty of the overall plot ruined the book for me but it did lead to a lessening of suspense somewhat on that point.

Those are minor quibbles as I thoroughly enjoyed this book and can highly recommend it. Take it to the beach, escape from reality a while with it, or add some excitement to your life. Just don’t miss it.

March 14, 2012 Catholic Thriller Week: Dimiter by William Peter Blatty
Recent Comments
0 | Leave a Comment
Browse Our Archives
get the latest from
Catholic
Sign up for our newsletter
POPULAR AT PATHEOS Catholic
1

Listen to the Church, not LifeSite,...
Chaos and Old Night
Related posts from Happy Catholic Bookshelf

After COVID19
COVID19 has shown us the broken nature of contemporary American society.  Not...
view all Catholic blogs
What Are Your Thoughts?leave a comment
Copyright 2008-2020, Patheos. All rights reserved.