Twelve years ago, when I was buying and reading and borrowing every book Padre recommended, I read quite a bit of Scott Hahn. I can’t remember if I started with Hail Holy Queen or The Lamb’s Supper, but I devoured them both, along with at least two or three others.

I went to a Lamb’s Supper Bible study Father hosted and listened to a number of Hahn’s talks in those years. I got what I thought was a pretty good feel for his style and the fact that he was The Man for all things Catholic.

Got a question? Find a Scott Hahn book. You can’t go wrong.

Then I discovered other Catholic reading and it’s been a lot of years since I’ve read Scott Hahn (at least five, but maybe a few more).

I learned a lot from Scott Hahn: from his straightforward writing to his scholarly abilities. He seemed humble without skipping a beat or not knowing the answer before I could form the question.

I was curious, then, when his latest book, Consuming the Word: The New Testament and the Eucharist in the Early Church, fell into my lap.

On the one hand, would I still like him now that I was no longer a “new” Catholic? Would I still find him approachable and readable and enjoyable? Would what he wrote matter to me now?

The answers, in was a yes trifecta that left me happily dog-earing and highlighting and reading passages aloud to my just-trying-to-watch-a-show husband. 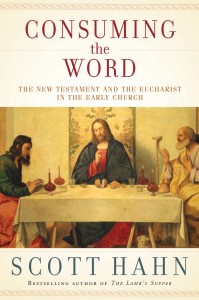 I mean, what’s not to love about a foreword (by a cardinal, no less) that dives into the discussion of New Evangelization in the second paragraph? (Let the dog-earing and highlighting begin!)

The New Evangelization is not a program. It is a mode of thinking, seeing, and acting. It is a lens through which we see the opportunities to proclaim the Gospel anew. It is the work of the Holy Spirit active in the Church.

I’ll admit, I was wondering just what the New Evangelization had to do with a book by Scott Hahn about the Bible…and I was feeling a little less-than-ready, if I’m honest. Cardinal Wuerl didn’t wait long to lay it out for me:

The New Evangelization calls us to render that voice intelligible to our age. The Word never changes, but the voice must be clear and relevant. The tone must be alive and enthusiastic. Our witness must be heard in the places where our people are.

And the book does not disappoint. Hahn states in his “prefatory word” (which phrasing, dear reader, I must say made me leap with delight and I may or may not be appealing to all future publishers to let ME be Just Like Scott Hahn) that this is

not an academic book, though I hope scholars will find it satisfying and useful. Yet it is not quite a book for beach reading either. Some of the material is demanding, though I hope I have placed it well within the reach of motivated lay readers.

One thing I particularly appreciated about Hahn’s approach to the topic, the New Testament as more than just a document, is that he did it in a way that I would call very ecumenical and completely Christian.

This book isn’t just for the Catholic reader, and I don’t say that lightly. In fact, I almost didn’t include it, except that I find it very curious and intriguing. I’ve tried to pass along other Scott Hahn books to non-Catholics and I’ve never really had success. They’re heavy and pretty Catholic. They’re not, in my experience, introductory reading.

This is a book that exemplifies “New Evangelization” in a way that doesn’t need to use the phrasing.

The Word was meant to be heard, proclaimed, shouted from the rooftops. Our interpretation of Scripture has to be lived and prayed and preached, so that the meaning of the Holy Writ is writ large not only in the hearts and minds of Christians but in the hearts and minds of their neighbors as well. Written text must become living Word, creating new lives out of the shell of old, re-creating men and women in light of the mystery of Christ revealed in the Word of God.

If you feel like the Year of Faith is slipping through your fingers, like maybe you are slackering a bit (I’m holding up a mirror to my face here), let me make a suggestion. Pick up a copy of this book and read it slowly, prayerfully, and maybe with a friend. Consider the lessons Hahn includes and the fire he ignites for the Word of God, both as sacrament and as text. Let Hahn inspire you to make the Word of God your life’s priority.

Faith does not abolish reason or replace it. Faith builds upon reason as grace builds upon nature. Faith presupposes reason and builds upon it for the purpose of healing the defects of sin and error, of perfecting it so that it can reason most reasonably—so that we can actually reason about things that reason could never know or demonstrate on its own.

A book you’ll be glad you read and one you’ll want to share as you re-read it. Hopefully, though, it lights the fire under you to attend to the Word of God at Mass and in your life with a new fervor.

You can read an excerpt of Consuming the Word at Image Catholic Books. 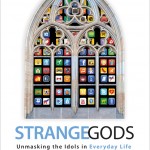 May 29, 2013 The Ear of the Heart: An Actress' Journey from Hollywood to Holy Vows
Recent Comments
0 | Leave a Comment
Browse Our Archives
get the latest from
Catholic
Sign up for our newsletter
POPULAR AT PATHEOS Catholic
1