I’ve been following Simcha Fisher on and off for a few years. Without fail, she always gets me laughing, whether she’s writing newsy stuff or cracking me up on her personal blog.

In the midst of my laughing, though, Fisher also gets me thinking, usually in a way that’s long and hard and ongoing.

She inspires me, that’s for sure. I don’t know many other people (in fact, I can’t think of any) who can get me snorting a hot drink even as I start to reshape a long-held opinion I’ve had. It’s a gift. (And maybe, for my nose, a curse.)

So when I heard that Simcha had a book coming out, I had an immediate response: that of asking for a review copy. (It wasn’t released yet.)

She sent it, and after the great lost-and-found Kindle Escapade last week, I whipped through it, nearly ruining my poor device with all the snot that flew its way as I unceremoniously laughed.

Not even Lino had me laughing this hard.

So let’s talk about the book, shall we? 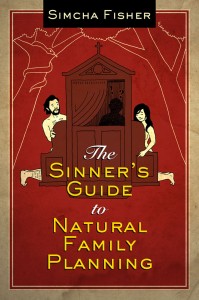 The title’s catchy: The Sinner’s Guide to Natural Family Planning. It’s only available as an e-book right now (there are rumors that it will be in print early next year, YIPPPPEEEEEEE!).

1. Fisher’s no-nonsense approach to a topic that so many people tiptoe around. She’s honest, which means there’s a lot to laugh about, some things to cry about, and everything to relate with.

2. The range of material in this book. The book won’t teach you Natural Family Planning, but it will crack open that “you’ll get along better” line of reasoning that so often feels a bit mythical and theoretical in practice. This is a book as much about relationships as it is about marriage and sex. Oh wait, those are all sort of the same thing, aren’t they?

3. The laughing I did. Because, well, this IS a topic important enough to laugh about. Would that we all realize that more…and see the truth that lies beneath our howling and guffawing.

Who this book is for:

Why you should read it:

Because, presumably, you’ve gotten this far in my post. And, last I checked, it’s already a top-ranking book with 73 (at the time of my posting) reviews and a FIVE-STAR average. 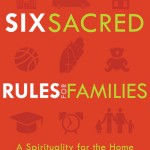 October 22, 2013
Six Sacred Rules for Families: A Spirituality for the Home
Next Post

October 28, 2013 Why Are Catholic Churches Like That? Reviewing "The Church" by Cardinal Donald Wuerl and Mike Aqulina
Recent Comments
0 | Leave a Comment
Browse Our Archives
Related posts from Happy Catholic Bookshelf