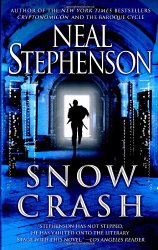 Unemployed programmer Hiro Protagonist works as a pizza delivery guy in a not too distant future, but it is far enough that the world is a very different place. Big businesses have gotten really big, owning neighborhoods where people are quasi-citizens of the company. They run legitimate businesses like Uncle Enzo’s CosaNostra Pizza, Inc., where Hiro works. They also have political connections and, often, organized crime connections as well. The other future development is how the internet has taken off and become a quasi-reality where people have alternate versions of themselves (called avatars) and interact with others who are physically far away. Hiro spends a lot of time in this “metaverse” and has customized several things about his avatar and his “property” in cyberspace. He is a hacker after all. The story hops back and forth between the real world and the computer world.

Things start to change when two things happen. First, on a failed pizza delivery he meets up with Y. T., a fifteen year-old Kourier who delivers messages by skateboarding from sender to receiver. She uses a magnetic harpoon to attach herself to vehicles so she can deliver items swiftly. She becomes an ongoing ally. Second, Hiro’s friend Da5id dies when he sees a certain image that makes his mind melt. There’s a virus called Snow Crash that’s a virtual version of the recreational drug Snow Crash which has become popular but also deadly. Hiro’s investigation into the virus catapults him and Y.T. into a fantastic, far-fetched adventure.

The set-up of the book is very interesting. The world is a fascinating imagining of the future, though bits of it are less convincing. Money in the future is highly inflated and some bills are referred to as “Gippers” and “Meeses.” That was surely hip and relevant in the early 1990s when the book was written but I doubt Millenials who read this book will have any idea to whom Stephenson is referring. The same goes for the L. Ron Hubbard character. The story also bogs down in unnecessarily long exposition about ancient Sumerian mythology which is tied into the plot. About half-way through the book I ran out of excitement and energy as a reader. Neither came back as I continued through the rest of the book. The action picks up at the end but my emotional investment in the story was gone so it wasn’t as compelling and exciting as it should have been. The book isn’t bad, it just isn’t as great as the hype around it.

A Word on the Mass Shooting in Buffalo
I want to say something about the horrific racist terrorist attack that...
view all Catholic blogs
What Are Your Thoughts?leave a comment
Copyright 2008-2021, Patheos. All rights reserved.