The Legend of Sigurd and Gudrun by J.R.R. Tolkien

The Legend of Sigurd and Gudrun by J.R.R. Tolkien May 27, 2016 Joseph Reninger 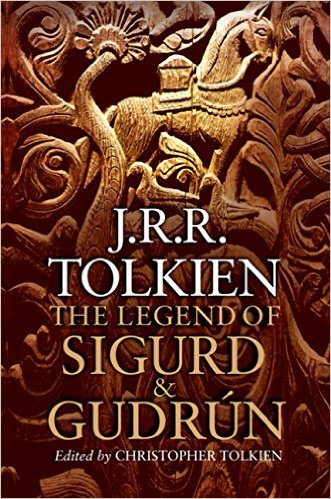 Old Norse and Germanic tales were a huge influence on J. R. R. Tolkien’s Lord of the Rings. He was a university professor specializing in philology, studying ancient languages and texts. Among the works he studied were the old Norse and Icelandic poems (called Edda) along with the later prose work Volsunga Saga. He re-wrote the poems concerning the hero Sigurd, who slays the dragon Fafnir, takes his horde of gold, frees the Valkerie Brynhild, and winds up at the court of the Niflungs (known in German as the Nibelungs). His life there proves to be his undoing as the princes’s mother uses witchcraft to mix up their fates, resulting in sorrow and death for pretty much everybody. Tolkien called this poem “The New Lay of the Volsungs,” the Volsungs being Sigurd’s family. He imitates the terse and alliterative style of the Edda poems to great effect:

folk all name him

Tolkien also wrote “The Lay of Gudrun,” about Gudrun, the daughter of the Niflungs who is wedded to Sigurd, even though he pledged his troth to Brynhild. A tale of betrayal and revenge spins out, resulting in the overthrow of the Niflungs by a foreign king.

This book contains the texts of both poems along with a general introduction on the style of the writing. The introduction is mostly by Tolkien’s son Christopher but based on notes from Tolkien’s lectures. Christopher also provides commentary and footnotes at the end of each poem. Appendices have more background information on the poems.

The poems themselves are the highlight of the book. They communicate the story with vivid style. The introduction is well worth reading for background on the poems, their writing, and their structure. I was able to appreciate the Lays much more. The commentaries are also helpful, though probably not as necessary for a second reading. Seeing elements that show up in Tolkien’s later works (like a cursed ring, etc.) is a fun discover. Overall, the book is highly satisfying reading.

June 2, 2016 Book Review: The Walls Are Talking
Recent Comments
0 | Leave a Comment
Browse Our Archives
get the latest from
Catholic
Sign up for our newsletter
POPULAR AT PATHEOS Catholic
1

Being Thankful When You Do Not...
suspended in her jar
Related posts from Happy Catholic Bookshelf