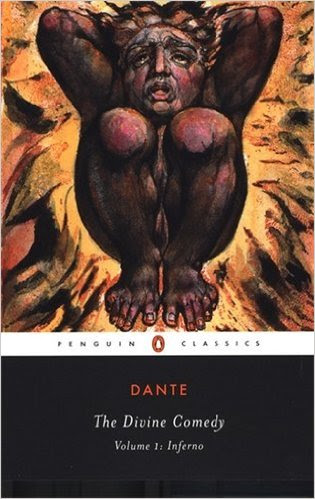 Inferno by Dante Aligheri, translated with an introduction, notes, and commentary by Mark Musa

The Divine Comedy is a classic of Western literature. Completed in 1320, Dante Aligheri’s epic poem is a journey through the afterlife. The first part is called Inferno and describes his trip through Hell. The poem starts on Good Friday eve, 1300 AD, and Dante wakes up in a dark valley where he is pursued by three wild animals. He runs into Virgil, the Roman poet. Much like the Blues Brothers, Virgil has been sent on a mission from God. Virgil is Dante’s guide through Hell and Purgatory. Once they reach Heaven, another will guide Dante.

Hell is organized into concentric rings that go down into the Earth, with the sinners and the punishments becoming worse and worse the further and further Dante and Virgil descend. At the top is a sort of vestibule where the indecisive, those who chose neither good nor evil, are chased at manic speeds by swarms of wasps. The punishment looks rather mild by the time Dante reaches the bottom of Hell, where sinners are partly frozen in a lake of ice and are chewing on one another. For all eternity.

The scope of the work is amazing. Dante finds room for every sort of sin and sinner. Famous figures like Pontius Pilate and Mohammed are mixed in with a large variety of 13th century Italians, including many figures from Tuscany, Dante’s home region. The punishments are varied and often evoke a sense of poetic justice. Dante, the character in the poem, goes through a transformation as well. At first, he is very sympathetic to the sinners. By the end, he has a much better awareness of the evil they have done and the appropriateness of their punishments.

I read the translation by Mark Musa. The text is very readable. He uses blank verse, so there is no awkward forced rhymes and the vocabulary is mostly modern. He also gives detailed notes at the end of each canto, explaining characters and references to historical events. The cantos are about 130 lines each and Inferno has thirty-four cantos. So reading one a day is an easy way to get through this part of the epic in about a month (or all three in a little over three months).

Julie from this blog and Scott have a commentary at A Good Story is Hard to Find podcast on this volume and will be commenting on Purgatorio and Paradiso in the coming two months (July and August 2016)! I plan on reading both.

Sample quote (on the giants in the bottom of Hell who are as tall as towers and as nasty as knaves):

for when the faculty of intellect

is joined with brute force and with evil will,

July 21, 2016 Book Review: Purgatory by Dante
Recent Comments
0 | Leave a Comment
Browse Our Archives
get the latest from
Catholic
Sign up for our newsletter
POPULAR AT PATHEOS Catholic
1

George Will and the Millstone of...
Catholic and Enjoying It!
Related posts from Happy Catholic Bookshelf