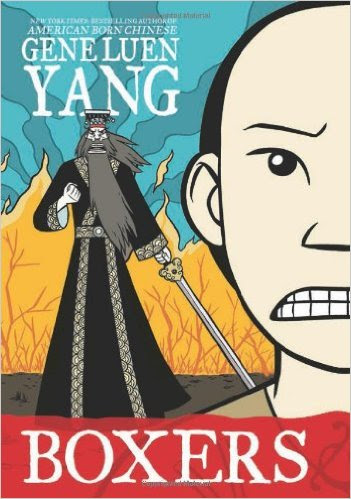 Little Bao is a young Chinese boy who loves the springtime festivals, especially the outdoor operas that tell the great stories of Chinese history and myth. Things are not as peaceful as they seem in 1890s China. A foreign priest visits the town and smashes the local idol, claiming they should worship the One True God, Jesus Christ. The villagers send Little Bao’s father to the local magistrate to protest. He get in a fight with foreign soldiers along the way. The father is basically incapacitated, leaving Bao and his two brothers to take care of things. A few years later, Red Lantern Chu comes to the village and starts teaching the locals, especially the boys, kung fu. Bao winds up training with Red Lantern’s master on a nearby mountain, where he learns how to channel the ancient heroes of China to help him fight the foreign devils. The situation in China deteriorates and Bao becomes a leader in the Boxer Rebellion, an attempt to oust all foreign influence in China.

This book is a companion volume to Saints, which shows the “foreign devils'” side of the Boxer Rebellion. This volume vividly shows the emotional involvement and motivation of the Boxers. The good and bad actions and attitudes of both sides are shown, making the tragic ending of the story all the more heart-rending.

Highly recommended! Also, the two books, Boxers and Saints, should be read together since they overlap so much and bring out interesting facets of each other.