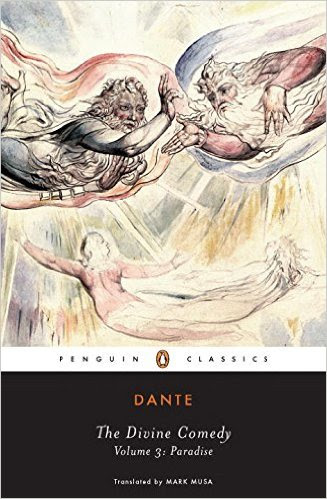 The Divine Comedy Vol. III: Paradise by Dante Aligheri, translated with an introduction, notes, and commentary by Mark Musa

See my reviews of Vol. I: Inferno and Vol. II: Purgatory!

Having ascended to the top of Mount Purgatory, Dante the Pilgrim is ready to leave Virgil behind and be led by the love of his life, Beatrice, through Heaven. Heaven is divided into concentric spheres, one each for the moon, the five known planets (Mercury, Venus, Mars, Jupiter, Saturn), the Sun (in between Venus and Mars in this schema), the fixed stars, the Primum Mobile, and the Empyrean. As Dante and Beatrice move upwards, they meet holier and ever holier people. The journey ends with Dante beholding the Beatific Vision, i.e. God Himself as He is.

Which is not to say that all the human souls and angels in the lower spheres do not have the Beatific Vision. They are less close in a spatial way but they still have supreme happiness and a full share in the infinite wonder. The souls repeatedly tell Dante that they are content with the level they are at, for they know that it is their proper place and they have complete fulfillment.

Dante also learns quite a bit of theology along the way. Jupiter is the sphere of the righteous rulers, including six exceptional rulers: King David, Hezekiah, Trajan, Rhipeus of Troy, Constantine, and William II of Sicily. That’s two Jews from the Old Testament, two pagans, and two Christians. Their presence sparks a discussion about how they all are in Heaven even though it is only through Christ’s redemptive suffering that anyone can make it there. Later on, Dante is questioned about the three theological virtues (Faith, Hope, and Charity) before he enters the final sphere, making clear points about theology and his personal acceptance of those virtues.

The text, like in previous volumes, is clear and straightforward. The notes are thorough and very helpful to understand the points Dante is making. The book makes for fascinating and rewarding reading.

A Good Story is Hard to Find podcast has previous commentary on Purgatory and Inferno and will be discussing this volume today (if all goes according to plan)! Check their web page!

August 11, 2016 Book Review: Navigating the Tiber by Devin Rose
Recent Comments
0 | Leave a Comment
"Does the author ever state any actual evidence that they used to determine the validity ..."
Donalbain Night’s Bright Darkness – Review
"Your readers may also like my family history book called TURNER TREES by award winning ..."
KEITH POTT TURNER Book Review: Discovery
"I read Mockingbird maybe 30 years ago after seeing the screen adaptation of The Man ..."
Cheeky Bugger A Magnificent Book: Mockingbird by Walter ..."
"If you're at all interested in knowing . . . the Catholic Dogmas . . ..."
Vicki DePalma Book Review: Boxers by Gene Luen ..."
Browse Our Archives
get the latest from
Happy Catholic Bookshelf
Sign up for our newsletter
POPULAR AT PATHEOS Catholic
1