St. Catherine Of Alexandria Stands Glorious In Her Victory Against Her Oppressors

St. Catherine Of Alexandria Stands Glorious In Her Victory Against Her Oppressors November 24, 2017 Henry Karlson 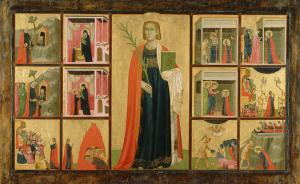 St. Catherine’s Monastery, which resides next to the mountain believed to be Mt. Sinai, serves as a fit reminder of the transcendence of God over the vainglorious presumptions of men. For not only does the Mosaic Covenant, established at Sinai, express the incomprehensible nature of God, putting aside all the false visions of God which preceded the Mosaic Covenant as idols to be cast away, St. Catherine of Alexandria, in her own tragic life, reinforces the division between the foolish wisdom of men and the great truth of God which no man can comprehend.

Historians might question the existence of St. Catherine of Alexandria; they might say she came out of the legends of Hypatia, transformed into a Christian story. But it is now a Christian (and universal) story which demonstrates the triumph of a strong woman against her unjust persecutors, a woman who can be seen in a way as every woman. St. Catherine was that woman whose wisdom transcended what men thought she should be allowed to possess (she is said to have victoriously debated many philosophers, converting many to the Christian faith). Her strength was stronger than that of the emperor himself (Maxentius): he could not break her down either by torture or by enticing her with the position of being his wife, making her empress.  Because she was beautiful and wise, and because she stood against the powers that be, many wanted to hold her down and control her for it; many hated her for her knowledge and so wanted to break her down for it. She was strong and noble and true, allowing her to easily transcend the evil wiles of the men who would use and abuse her as their own plaything; she might have been tortured, but that did not break her. She, in her stand, became a representation of all women, for she suffered what so many women suffer at the hands of evil men with the pretense of authority over them. She fought long and hard, never giving in to all the pressure put upon her. Even in her death, when she was beheaded, she was not broken down; she proved to be stronger and greater and with more personal authority and integrity than all her abuser; she was raised in glory while her persecutors fell and were seen to be shameful little caricatures of men whose power was illusory at best. Angels, it is said, took her body to Mt. Sinai, where miracles became attributed to her; she became, as it were, a Christian witness of the glory of God over the evil wiles of men, showing moreover, it is not just Moses who stands as a representation of the futility of human ingenuity, but humble women everywhere, full of wisdom and compassion, who are able to overcome the pretense of those who call themselves wise:

Let us praise Katherine, protectress of Sinai, Bride of Christ and our helper. With the sword of the Spirit she silenced the wisdom of the wicked. She is crowned as a martyr and asks mercy for us all (Troparion St Catherine of Alexandria)

Thus, it can be said that St. Catherine of Alexandria is, in her way, an exemplar of the feminine genius which has been subsumed for all too long, maligned and objectified by lecherous men who will destroy what they cannot possess. She stood strong for all women; it is easy to see how she can be untied with Hypatia, another woman, who stood high and was taken down by the feverous mobs of malignant men. She can take on and become every woman; every abused woman can take on and look to her as her story as a part of their own. God is with the wounded, the abused, the poor, the suffering, the unjustly maligned; it is no accident that in the Torah, God is shown to be the God of the orphan, the widow, the poor, the stranger, the maligned. God was with Moses because the people of Israel were the maligned strangers in Egypt; God was with Catherine and is now with all abused women because God, in becoming human, joined in with the suffering of humanity and became one with the wounded of the world. In all the suffering, there Jesus is to be found; on the cross, he took on the pains of the world, including the pains of sexual abuse (with hints which can be read that indicate, perhaps, the Romans also abused him sexually before putting him on the cross). Jesus, God knows the plight of the abused; he suffered in solidarity with them even as he took them into his loving heart, where he offers them the protection and shelter they need for healing and strength. He shows the world that God stands with the victims, and in him, those victims will be able to rise up in glory, to share in the glory of the resurrection of the dead. The response of God on that first Easter Sunday was not just the affirmation of Jesus in his glorious resurrection, but God’s affirmation that all the wounded and abused who find themselves one with Jesus will rise up with him in glory. St. Catherine represents this for all women who suffer undue objectification, all who have been tricked and abused; she is wise and beats the deceitful wisdom of the wicked; she in her life and words brought the spirit of truth down upon them, triumphing over them even as she rose up in glory. The attempt by her oppressors to destroy her failed. They are the snakes which have she has tread upon and overcame:

Behold, I have given you authority to tread upon serpents and scorpions, and over all the power of the enemy; and nothing shall hurt you. Nevertheless do not rejoice in this, that the spirits are subject to you; but rejoice that your names are written in heaven (Lk. 10:19-20 RSV).

Christ’s promise is shown fulfilled in her and all like her. When dangerous serpents bite, their poison might be strong, but the venom of their abuse can be overcome, and the snakes cast down and squashed down by the heel of those they would otherwise oppress. The healing which is to come after such attacks might be difficult, but the poison does not have to destroy. Any such victims can and indeed will become stronger as they rise up and stand together against the oppressor who would take them down:

You lovers of martyrs raise a chorus now in honour of wise Katherine. She preached Christ in the stadium and spat on the knowledge of philosophers (Kontakia St Catherine of Alexandria)

Let no one object to the response of the victims, to strength and virtue they show as they take down the structures of sin; their very spit can help wipe clean the stains of the past; do not scorn them in their fight, but rise up with them, and call forth for the destruction of all the false wisdom which has been used to help establish and reify their oppression. Let God arise and all the enemies of goodness scatter! 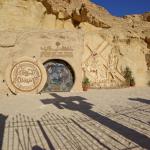 November 22, 2017
Legalistic Condemnation Must Give Way To The Humble Spirit Of Love
Next Post 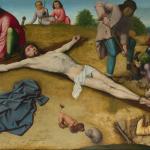 Catholic
Willing Like Jesus
A Little Bit of Nothing

Catholic
The First Six Ecumenical Councils And The Mystery...
A Little Bit of Nothing
TRENDING AT PATHEOS Catholic