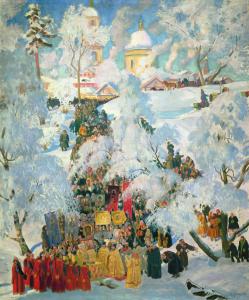 Even though spiritual darkness covered the land, the light remained. The darkness fought against the light, but nothing the darkness did could snuff it out. The light could be hid, the light could be dimmed, but the darkness could not completely overcome the light. Where the light shined, there it revealed glimpses of beauty which was so pure, it had to be good. Where the light shined, the truth which the darkness tried to hide was revealed, even if in small glimpses. Those who followed after the light, those inspired by its beauty, found the fire of truth burning inside themselves, a fire which they could and would share with others, allowing that light, however weak it was, to spread, revealing more and more glimpses of that truth throughout the world.

The world by nature was not ugly. The world by nature was not evil.  What had been done in the darkness, in the groping of men and women as they wandered around blindly, certainly left its mark upon all things. The earth had been kicked about; the people in it had been bruised. When people go to see what had happened with a small portion of the light, the disfigurement they saw caused some to turn back into the darkness to hide themselves from the horror. There, they once again went around blindly, hurting themselves, disfiguring themselves some more. Those who did not turn back, those who embraced the light, saw the scars of what they went through, and so were glad for the light because with it they knew they would not have to suffer the same again. It is not that they were given the fullness of the light, but what they had, the small fire, the small torch of truth which they could use, helped them slowly maneuver through the trials and tribulations of their day.

The darkness fought against the light, but the light would not let itself be extinguished. Those who was hid in the dark, those who developed themselves to live and thrive in the dark, the monstrous creatures which accepted the dark, were never truly helped by the darkness which they embraced, but yet they found the light to be so painful they felt it better to fight amongst each other in the darkness than to accept the light. Some of them became powerful in the darkness; they adjusted themselves to it, and found out the way to use it to their benefit, to push others down, keeping their enemies under their feet and under control. They grew rich in the ways of darkness, seeing themselves as lords of the darkness; when they heard a messenger coming from within the darkness speaking of the light which is to come, they were interested but afraid. They hated the messenger and sought to snuff him out; but they were unable to do so before he fulfilled his mission, preparing those in the darkness for the coming of the full light of truth; the messenger set up a light which helped those in the darkness adjust to the light so that when the great light came, they would not have to shrink back but embrace it for the glory which it is to provide.

This, then, is the story of St. John the Baptist; he used the lesser light given unto him to prepare the way for the light of the world, the messiah, Jesus Christ.  Many came to him; the poor and oppressed found comfort in him, while those who most embraced the power attained in the darkness found his message uncomfortably harsh as he asked them why they came to him if they would not be willing to forgo the darkness. If they would repent and embrace the light, truly overturning their ways, he would baptize them, but if they wanted to keep lording it over others with the advantages they gained from the darkness, John cast them out and denounced them for embracing the darkness:

Then the one who was the light of the world came to John; the light was so bright, only John could see into it and know that his mission had been accomplished. But to his surprise, Jesus came, bending down to him, asking John to baptize him. Here, it was too much. Even John had to hold back from the fullness of the light; how could Jesus, the light of the world, come to him in such a way? Yet, it was necessary. John obeyed, and so saw deeper into the light, coming to know the light as the light of the Trinity, that God is found in Father, Son and Holy Spirit:

Then Jesus came from Galilee to the Jordan to John, to be baptized by him.  John would have prevented him, saying, “I need to be baptized by you, and do you come to me?”  But Jesus answered him, “Let it be so now; for thus it is fitting for us to fulfil all righteousness.” Then he consented.  And when Jesus was baptized, he went up immediately from the water, and behold, the heavens were opened and he saw the Spirit of God descending like a dove, and alighting on him;  and lo, a voice from heaven, saying, “This is my beloved Son, with whom I am well pleased” (Matt. 3:13-17RSV).

The light came to reveal itself to the world. The light came to disperse the darkness and heal the damage done under its dominion of the world. The light brings the glory of God, the healing grace of the Trinity, into the whole of creation. The world was created with the Spirit blowing across the waters, and the recreation of the world through the God-man finds the Spirit once again going upon the waters, sanctifying them, preparing them to be an instrument for the new creation. The waters are sanctified, the elements of the world are cleansed, so that the filth which stained them is overcome. The waters are filled with glory, they are given a bountiful grace, a reflection of the divine glory of God, and with them, the whole world is opened up so that everything can have a place not only in the restored creation but in the means by which the restoration of the world would take place. The waters, filled with the Spirit, are now able to be used as a vessel of salvation, bringing the rest of the world into contact with the God-man.

Great mysteries are revealed in the light; John came to know God as Trinity; the Theophany reveals the glory of God as Trinitarian, with the Father working through the Son and Spirit in the world. The baptism of Jesus was done for us and the world. John had to embrace the light, not shy away from it, so that he could give that light to the rest of the world. Now we can know the light of truth, the truth of the Trinity revealed in the glory of John’s baptism of Jesus:

When Thou wast baptized in the Jordan, O Lord, the worship of the Trinity made its appearance. For the voice of the Father bore witness to Thee when He called Thee His beloved Son. And the Spirit in the form of a dove confirmed the truth of the word. O Christ our God, Who hast appeared and hast enlightened the world, glory to Thee! (Troparion of Theophany).

The light shines on. Will we embrace it today? 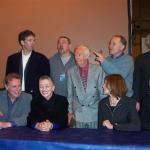 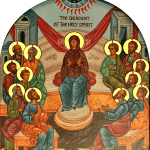 January 8, 2018 The Holy Spirit
Recent Comments
0 | Leave a Comment
Browse Our Archives
get the latest from
A Little Bit of Nothing
Sign up for our newsletter
POPULAR AT PATHEOS Catholic
1 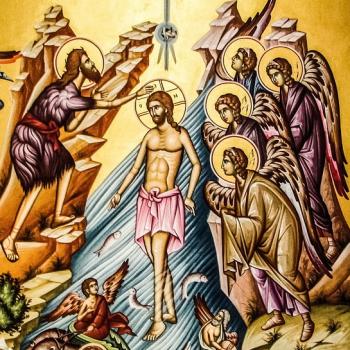 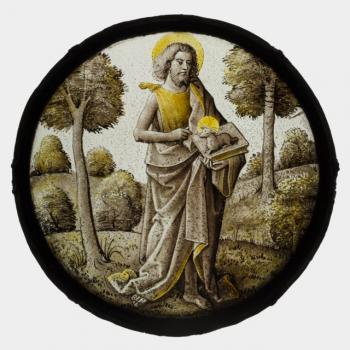