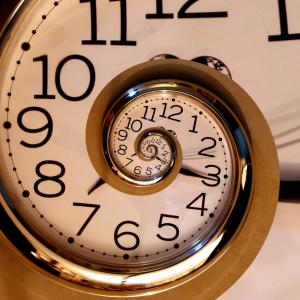 God is not to be confused with creation. Pantheistic interpretations of God which suggest he is in himself is one and the same with creation ends up making God tied to contingency, suffering the limitations of such contingency. Dionysius, to make sure God is not confused with contingent being, therefore wrote that God neither is essence  (οὐσία) nor eternity (αἰὼν) , nor time (χρόνος).

Likewise, he is not bound by eternity or time. He transcends both as he establishes them in his creative activity. Both eternity and time are capable of being measured. Time flows out of eternity, is derivative of it, so that denying God as being in time does not mean there is a denial for God being bound by eternity. But by saying God transcends what is established with the concept of eternity, God then certainly transcends all temporal notions. In this fashion, Robert Grosseteste explained:

Above these there is no power higher or closer to God, and therefore the author returns to the measure which follows upon the being of every existent, denying this of the first cause. This measure is divided  (as it was said above in the book of the Divine Names) into everlastingness and time: everlastingness is a more excellent measure than time, whence it follows, not everlastingness nor time (meaning: the first cause). [1]

Time, certainly, more than eternity, can be easily overturned for God. For those things established in time have a beginning and an end, while God has neither a beginning nor an end.[2] That which has a beginning and end can be measured by eternity. Eternity, on the other hand, is limitless in the sense it does not possess such beginnings and endings. Yet, what is in eternity, even if it is not limited in the way time is, nonetheless can be shown to have limits of its own, for whatever exists in eternity finds itself related to an eternal substance which has its own boundaries in relation to other eternal substances which allow them to be differentiated. We can imagine things to be infinite and yet bound by looking at the distinctions between lines and planes: a line can be infinite, without beginning or end, and yet it is tied to its own inner nature and essence which limits it so it is bound within the contours of a plane. An infinite number of lines can exist in a plane which differ from each other, similar to an infinite variety of substances can be established in eternity which differ from each other and yet found themselves contained in boundaries of their own. That is, while that that which is eternal has no beginning and end but is one complete everlasting whole in relation to itself and its own nature, it is still bound to that nature and does not transcend it. The relationship between time and space mirrors the relationship between eternity and substance.  There can be many eternal things, demonstrating that eternity itself is a part of divisible being, which is participated in by many others, as Proclus suggested:

But nothing can partake of God as he is in himself.  Whatever is eternal share with each other that eternity, and so eternity must not be what God is as he is in himself.  Nonetheless, we can and often say God is eternal through kataphatic theology. We do this as a way to indicate he is not bound by time. Through kataphatic theology, an apophatic statement is affirmed, and for many, that is as far as they go in their contemplation. Dionysius, however, understood that we cannot stand on conventions when seeking the absolute, and so had to declare God is not eternity in order to verify he transcends that which he established in his creative will. Nothing participates in God as he is, taking from him and making his nature one with theirs, confusing God with contingent being. God is everywhere present in his creative activity with us, but he is not bound by that activity; he is more than what we see and know through his creative economic activity.

Substance, time, and eternity are all inter-related qualities and measures of being. God is beyond all such measures, even οὐσία, because he establishes them in his creative activity. They do not come from his own nature, but rather, they are established by the creative will of God. They come from him but are not to be confused as being who and what he is in himself. There is a unity between God and his creative act, so that there is nothing which exists which exists outside of God, but it exists not of God as if God were prime matter to be shaped and molded into new forms, but rather, God established creation through his will to establish it. In producing creation. God established various measures of being. God is not to be confused with his creation. He is beyond all substance, all being, all time, indeed, eternity itself, though we can and do employ such words in kataphatic speech so we can apprehend, in our limited fashion, his transcendence. We can understand categories of being; we can understand the substantial unity of creation and how it can be seen to form one whole. We can understand how eternity is the foundation for time, and so we can understand God, similarly, as the foundation for all being, but when we try then to see him as the foundation in the same way as we think of some generic substance or eternity, we only then end up conceiving the relationship between God and his creation in a monistic sense, ignoring then the distinction between the two and the reality which lies behind creation itself. 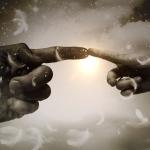 August 16, 2018
Dealing With The Paradox of God: Part Three of Three
Next Post 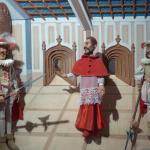 August 21, 2018 Admit and Condemn
Recent Comments
0 | Leave a Comment
Browse Our Archives
get the latest from
A Little Bit of Nothing
Sign up for our newsletter
POPULAR AT PATHEOS Catholic
1