Abba Theon And The Robbers

Abba Theon was an educated anchorite who lived in his cell for over thirty years. He was known to be able to read Greek, Latin and Coptic. But it was not his learning which set him apart. It was his mystical connection to God, a connection which  led him to have a compassionate relationship with all he encountered, including the various animals which would visit him at his cell. He led a simple life, eating only vegetables which did not have to be cooked, even as he embraced the path of silence, practicing it as a way to reach out to and encounter God.

Theon was known to be a miracle-worker, healing many people from the maladies which they suffered. Not all of those maladies were physical. Many of them were spiritual. Indeed, psychological or spiritual maladies were his most important concerns. Once, it is said, he came to a point of crisis, where he had to teach those who listened to him to heed the Christian path of mercy. If they were unwilling to listen to him, if they were not willing to let him by their spiritual physician and heal them from their inordinate passions, he would no longer be able to help them with their physical ailments:

Not long before, some robbers had come at night form some distance away to attack him. They thought that they would find a considerable sum of gold hoarded by him, and intended to kill him. But he prayed, and they remained at the door, rooted to the spot, until daybreak. When the crowd came to see him in the morning and proposed to burn these men alive, he was forced to speak a single sentence to them: ‘Let them go unharmed; if you do not, my gift of healing will leave me.’ They obeyed, for they did not dare contradict him. The robbers at once entered the neighbouring monasteries, and with the help of the monks changed their way of life and repented of their crimes.[1]

Abba Theon knew the teaching of Christ and lived it. He was not concerned about wealth. He was not concerned that the robbers had come to his cell hoping to take from him wealth which he did not have. If he had it, he would have had no problem giving it away, for it is clear, he had already given away what he had to become a monk. Having abandoned such earthly cares is what allowed him to become a spiritual physician, taking care of the needs of those who came to him. He believed that the would-be robbers were among those whom he had been called to shepherd. He believed he could and should do what he could to save them. That meant, he had to show them mercy. And it was indeed what he was willing to offer them.

Theon, however, had to help more than the would-be robbers. He had to guide those who otherwise came to him for advice. That crowd, upon seeing the robbers outside of his cells, demonstrated how far they were themselves from the teaching of Christ: their first thoughts were to kill the robbers, burning them alive. If they had done so, they would not only have killed the robbers, but they would have become worse than the robbers themselves, embracing the path of death instead of the mercy and grace which surrounds the path of life.  “Let all bitterness and wrath and anger and clamor and slander be put away from you, with all malice, and be kind to one another, tenderhearted, forgiving one another, as God in Christ forgave you” (Eph. 4:31-2 RSV).

Abba Theon demonstrated his acute understanding of the Gospel. Not only did he know that he had been called to lead the would-be robbers to salvation, but also, and especially, he was called to help those who considered themselves to be his disciples. So many had come to him to take from him the spiritual gold which he was willing to hand out. They did not realize that they were just like the robbers. But Theon understood this. And so he treated the crowd just like the robbers, giving them the lesson which they needed. He took his position seriously and was able direct everyone to their salvation.

Theon knew that the crowd wanted to be near him because they believed him to be a miracle-worker. Many came to him, hoping to have their physical sicknesses healed. But he knew they needed much more than that. He was to give to them a greater miracle. He was to help them with their spiritual sickness. He saw the darkness over the souls of the crowd which had come to him, and saw they were like the souls of the would-be robbers, dark and full of terrible passions which needed to be redirected. They had to be turned away from the path of selfishness and violence and onto the path of mercy and grace. The crowd and the robbers both received a lesson from Theon at the same time. Both of them received his mercy and grace. Both of them received a miracle, changing their lives. For they all turned away from the path which they had taken and repented of it. The would-be robbers found their lives changed as they turned away from a life of crime and became monks themselves, while the crowd repented of the crime which they would have committed if they had mobbed the robbers and mercilessly killed them out of anger and instead saw that they could not and should not deal with others with such violence.

“Let the thief no longer steal, but rather let him labor, doing honest work with his own hands, so that he may have something to share with anyone in need” (Eph. 4:28 RSV). The would-be robbers were led by Theon to do just that; they became honest monks who became servants of others, sharing of themselves instead of unjustly taking from others. Likewise, the crowd learned it could not take Theon’s spiritual gold unless it was willing to turn around and likewise give themselves to others, helping those in need, which, in this case, were the would-be robbers.

Abba Theon was unwilling to have people killed in the name of gold. We, too, should not want people killed in the name of gold. We must forsake the path of anger which leads to the path of death. We must not go looking for holy people to prop up and kill in their name. If we would do so, we will risk destroying the fruit of their labor, just as Theon knew he would have lost his ability to heal his flock if he let them kill others in his name. Let us hope we, too, can learn the lesson given by Theon, lest we find grace cut off from us and we do not receive the healing which we desire for our lives. 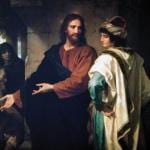 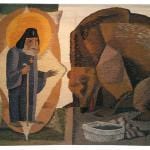 Hilary White Wants to Trash &...
Biblical Evidence for Catholicism
Related posts from A Little Bit of Nothing