Similarities Between Judaism and the Hindu Way of Life

Similarities Between Judaism and the Hindu Way of Life April 5, 2019 Sunil Daman

There are various branches of Judaism. One branch related to mysticism is Kabbalah, which is thought to have been around as an oral tradition since 1000BC, and it bears many striking similarities with the Hindu way of life. In this post, we look at a few of these amazing parallels.

Similarities between Judaism and Indian culture
The idea of emptiness or nothingness is important in certain traditions of Judaism, especially Kaballah. It is called Ayin in Hebrew, and literally means nothingness. When existence came into being, there was only nothingness, it is said. The kabbalistic term for God is “Ein Sof” or without end.

Union: In Jewish mysticism it is maintained that there is no such thing as isolated existence. Everything is linked with everything else, and nothing exists outside God.

Diet rules: Kosher is about adhering to certain dietary laws in the context of tradition. It is a way of turning ordinary food into sacred food through ritual transformation.

Vegetables and fruit can be eaten without any ritual. With respect to animal meat there are several categories of prohibition. Most fish with fins and scales are permitted, and there is no special preparation needed for eating fish.

There is a certain list of birds that one may eat but they have to be slaughtered in a special way, with the recitation of certain prayers and with the least possible amount of pain and suffering.

Even more severe are the rules concerning the eating of the higher animals. The slaughtering process and the preparation before cooking are described in detail in Jewish tradition.

Magic spells: The Kabbalah tradition has books of magic spells with instructions on how to create magical objects like talismans and amulets, how to perform magical spells, charms and divination, and how to summon or invoke supernatural entities such as angels, spirits, deities and demons.
Sutra on the Wrist: The tradition also has the concept of a scarlet or crimson string of woollen thread that is worn around the left wrist, to ward off evil eye. The string should be knotted seven times.

Lunisolar Calendar: Jewish calendar is lunisolar. The Jewish New Year is called Rosh Hashanah. The ten days following Rosh Hashanah are called the ten days of repentance. These ten days end with the day called Yom Kippur, which is the holiest day of the year in Judaism. It is the Day of Atonement and Repentance. This ten day period coincides with Dussehra and Yom Kippur coincides with Vijayadashami. Jewish people observe this holy day with a total fast and prayer.

The Jewish holiday of Purim is also celebrated on the same day as Holi. Purim is said to be the day when ancient Jews in Persia were saved from being put to death by one of the Persian rulers. Purim celebrations include the burning of an effigy of this ruler, a similar custom to the burning of an effigy of Holika in Holi. In fact, in the story of Holi, Holika is a demoness who is burnt to death. Purim celebrations also include a lot of gaiety, carnivals and celebration.

Jewish culture is also attuned to the solstices and equinoxes. Astronomy and mathematics is a strong feature of the culture.

Jews in India: The Bene Israel (meaning “Sons of Israel”), were a group of Jews living in India for centuries. They believed that they travelled centuries ago from Israel to India and assimilated there. After the 1948 establishment of Israel, most of this community moved there.

Death Ritual: Judaism has something known as Shiva (which means “seven”). It is the week-long mourning period in Judaism for first-degree relatives. The ritual is referred to as “sitting shiva.” 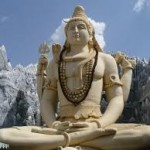 February 23, 2019
UPA or NDA: Which is Better? Factual Comparison
Next Post

April 30, 2019 The Kashmiri Pandit Exodus
Recent Comments
0 | Leave a Comment
Browse Our Archives
get the latest from
Hindu
Sign up for our newsletter
POPULAR AT PATHEOS Hindu
1

Karma Is Hard To Understand
The White Hindu
Related posts from Hindu 2.0

Hindu
6 Famous Places In Kashi You Should Visit
Hindu 2.0