The Church of the Holy Sepulchre

With its twisting labyrinth of streets, alleyways, and cave-like merchants stalls, the Old City is the most fascinating part of Jerusalem. It is divided into four quarters: Christian, Jewish, Armenian and Muslim. Its crowded streets bustle with orthodox Jews, robed Muslims, Israeli soldiers, and Christian pilgrims from around the world.

For Christians, of course, the holiest parts of the Old City are the sites connected to the life of Jesus. The Via Dolorosa, the “Way of Sorrow,” marks the path followed by Jesus from the judgment court, known as the praetorium, to Golgotha. The route includes fourteen stations, nine along the narrow streets and five inside the Church of the Holy Sepulchre. Many of the stops include chapels for meditation and prayer.

Was this the exact route taken by Jesus? Probably not, say historians. But as with so much in the Holy Land, exactitude is not the point. Jesus did walk through the city of Jerusalem on his way to be killed, and then, as now, the city was a bustling place, full of sounds and smells and the cajoling of shopkeepers. The activities of the world did not stop for that tortured journey, and neither does the Old City keep quiet for the pilgrims who reverently walk the Via Dolorosa today.

The Via Dolorosa ends in the Christian Quarter at the Church of the Holy Sepulchre, the place where by tradition Jesus was crucified, laid in a tomb, and resurrected (during his life, this spot would have been outside the city walls). This is arguably the holiest site in Christianity, jointly maintained by the Armenians, the Roman Catholics, and the Greek Orthodox, with a Muslim family in charge of opening and shutting its doors each day because of a history of squabbles between the various denominations (so much for Christianity unity).

Also known as the Church of the Resurrection, this spot has been an important pilgrimage site since the fourth century. Over the centuries it has been destroyed and re-built several times; the current building dates back to the 12th century.

Before coming to Jerusalem I had read quite a bit about this fabled holy site and how it has been the focus of so much strife (the Crusades, in fact, were in large part sparked by this church falling under Muslim control). After visiting it, I’m still trying to sort out in my head what I think about it. It’s one of the weirdest holy sites I’ve ever been. It’s perhaps best described not as a church, but as a series of shrines. Inside the door, visitors climb the stairs to Golgotha, a spot marked with a gilded and highly ornamented Greek Orthodox altar. Descending the stairs, they pass by the Stone of Unction, which commemorates the spot where Jesus’ dead body was anointed and wrapped for the grave, and then pass to the sepulchre itself, the spot where Jesus is said to have lain before his resurrection.

The church is filled with people, creating a hum of conversation in languages from around the world. The various clergy bustle back and forth, immersed in a complicated set of rituals that don’t seem to involve anyone but themselves. The lighting is subdued, making the flickering candles of the various shines even more evocative and mysterious. And at the center of the building is a long line of people standing in front of the sepulchre, waiting to enter the tomb itself.

I didn’t stand in that long line, which might seem surprising given my status as the Holy Rover. Part of it was a reluctance to spend so much time waiting. Part of it was something our guide said the first time I toured the church (I went back several times later on my own). After showing us the various shrines, he took us to a spare and unadorned room at the back of the church, a place that held only a single woebegone altar. Nearby was the entrance to a small cave hewn out of rock. “According to tradition, this cave is the tomb of Joseph of Arimathea,” he said. “All the crowds go to the sepulchre, but I think this spot may well have been the place where Jesus’ body was laid.”

Whether or not that is true, I loved that quiet spot at the back of the strange, bewildering church. Inside the cave there was a small oil lamp burning, its light creating a halo of radiance. Resurrection is far more likely in a place like this, it seems to me, for rebirth needs darkness and quiet.

When I think back to my time in the Holy Land, it is the light burning in that tiny, dark cave that I remember most of all. “And the light shines in the darkness, and the darkness did not comprehend it,” wrote the author of the Gospel of John. And surely that is still true today, is it not? 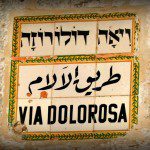 New Visions
On the Via Dolorosa, Where the Sacred Hides...
Holy Rover 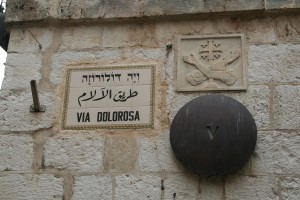 New Visions
On the Via Dolorosa
Holy Rover 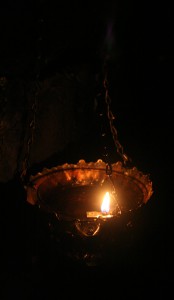