The number of homeschoolers grew by nearly twenty percent between 2007 and 20012.  Not surprisingly, then, there has been increased attention on homeschooling from legislatures around the country. What is the appropriate role of the state in the lives of homeschoolers?  Do I as a parent have the right to call all the shots for my own children?  Do we as a citizenry have some role to play in the education of all children?

As the country increases testing demands, do we care that a growing number of children may never see a standardized test?  What about those families that only want to teach the Bible and don’t give a hill of beans about Algebra?  What about those families who don’t want to push formal academics and are happy to have their children spend their days whittling and baking bread and reading novels?  Is that good for our society?  Do we have any recourse if we don’t think it is? While many homeschoolers want as little intervention from the state as possible, some former homeschoolers are pushing for more regulation.  Organizations like Homeschoolers Anonymous and Coalition for Responsible Homeschooling worry about educational neglect and even abuse.  An article in the New York Times today quotes Csitlin Townsend:

“When I was growing up we always talked about the school officials as the Big Bad Wolf,” said Ms. Townsend, who had to enroll in remedial math classes in college. “What I could have benefited from was a system of evaluation that would have given my mother some red flags that I needed some tutoring in science and math.”

I spent a lot of time in public schools – as a student, a teacher, and a parent.  And I can say that much of what happened in those places could be considered educational neglect.  We know the horrible statistics about what happens to many poor children across this country.  And part of why I pulled my boys out of our public school was because I thought their time spent there was a waste of time at best.

And yet… I have this strong sense that families are not islands, that communities have a right and a duty to think about what it means to be a child in that community, that societies don’t work without an educated citizenry. Ugh.  I really don’t know what I would do if I had to write the laws myself.

I have no doubt that my local school district wouldn’t do a better job educating my sons than Jeff and I are doing, and their minimal intrusion into our homeschooling has been ridiculous. (Like the time they questioned my credentials for homeschooling even after learning that I am a former teacher and have three education degrees.) But maybe I have to give up some of my freedom for the good of those kids whose parents aren’t allowing girls to study chemistry?

Help me out, friends.  What do you think? 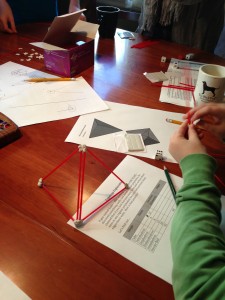