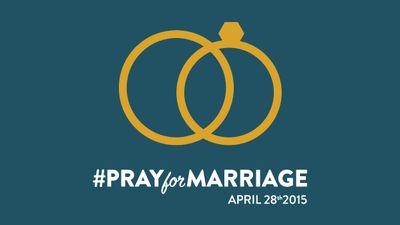 I invite you to join many Christians around the nation in praying today as the Supreme Court hears oral arguments over the power of states to define marriage between one man and one woman.

#PrayForMarriage is more than a prayer for legal victory (though it isn’t less). It’s a prayer for a cultural renewal, for awakening from the toxic slumber of the Sexual Revolution and awareness that marriage and family are gifts from a Creator and not social constructions to be bended at will. #PrayForMarriage isn’t about the Left vs. the Right. It’s not about who is elected where. It’s about the need for children to be born into a society that values them enough to give them a mother and a father.

The Supreme Court’s power is significant, but it is limited to legal recognition. The Court cannot “redefine” marriage any more than the Court can establish the three-fifth personhood of slaves or the non-personhood of the unborn. What the Court can do is codify legal recognition of truths–or untruths. #PrayForMarriage isn’t a hand-wringing exercise in which our hope for marriage or future generations is pinned on the consensus of nine people. As Russell Moore says, “Marriage is resilient.” It’s not man-made and therefore cannot be man-unmade.

Perhaps you are a supporter of same-sex marriage. Perhaps you find it intolerable that anyone would suggest that two men or two women cannot get married. My challenge for you is this: Listen to the arguments themselves. Expand your perspective to include thousands of years of human civilization and legal history. Don’t dismiss those you disagree with as “homophobes.” Some might be, but many aren’t, and their voices are learned and should be heard.

Perhaps you are a Christian who thinks this entire debate is unnecessarily divisive and unfortunate. Perhaps you wish we could get back to loving our neighbors and caring for the poor and not talk about same-sex marriage anymore. My challenge for you is this: Think of future generations. Think of people who will come after you’ve gone. Imagine a culture which by its legal system holds the union of a mother and a father in contempt and declares it irrelevant to the modern mind and unnecessary to the well-being of a child. Surely this is worth striving for. The gulf between compassion and conviction may not be as wide as you think; in fact, they may be one and the same.

May 2, 2015 How Millennials Can Be Happy Again
Browse Our Archives
get the latest from
Evangelical
Sign up for our newsletter
POPULAR AT PATHEOS Evangelical
1