How Millennials Can Be Happy Again

How Millennials Can Be Happy Again May 2, 2015 Samuel James

It was the pastor Martyn Lloyd Jones who said, “Have you realized that most of the unhappiness in your life is caused by your listening to yourself rather than preaching to yourself?” His point was not that depression and anxiety are remedied by constant muttering or inane “self-value” pep speeches; rather, Dr. Jones’s point was that most of the most precious truths that give us strength, humility and grace are not things we instinctively rehearse in our minds on a Monday morning. Rather, our inner thoughts and feelings tend to be formed by oscillating emotions, daily challenges and struggles, and the extremities of our personalities. To speak grace and truth into our lives, then, means going outside ourselves and consciously doing so.

Not only is this true as a daily spiritual practice; it is actually true on a wider and more holistic scale. To give our lives meaning, love, and grace, we have to journey outside ourselves. It is not enough to live as an isolated, autonomous individual, feeding on a steady diet of self-esteem literature and positive thinking. Instead, our deepest moments of truth and realness come when we are in relation to someone or something outside of ourselves.

I was reminded of this again by David Brooks, the famous columnist for The New York Times. In a recent interview with Charlie Rose, Brooks discussed the life of George C. Marshall, the legendary former Army Chief of Staff during World War II. Brooks made a point of emphasizing that Marshall was willing and eager to make serving the Army his life’s commitment. He gave himself to the cause of the institution, Brooks said, in a way that allowed the Army to shape his identity. He “emptied himself” in order to become a servant of the institution. Thus, Marshall’s legacy became one of historic self-control and indefatigable service to those around him.

Brooks using Marshall and other examples to argue that one of the signs of a person who has character is a willingness to make “amazing commitments” (Brooks’s words) to meaningful causes. Whether to another person, an institution, a cause, a church, etc., the emotional centering that defines people with consistent character comes from making self-emptying commitments to something(s) that exists outside of the self. Brooks summarizes the lesson beautifully: “Love de-centers the self.”

If anyone needs this lesson urgently, my fellows in the Millennial generation do.

We exist in a remarkable age of technological innovation and societal diversity. Yet, for all our intellectual cunning and “progressive” social mores, we function much like an archipelago of lonely islands, drifting through life towards death in tandem but not in meaningful unity. A generation’s worth of propaganda about the worth of “individualism” and “self-discovery” has failed to produce fruit, unless by “fruit” you mean pathological loneliness, spiritual and communal isolation, and neo-Puritan moral outrage. In our sprawling, postmodern society, the need for moral centering and spiritual connection has never been greater, yet Millennials often retreat from the moral and social buffers of church and marriage. Social media has become our neighborhood while narrative blogging has become our life counselors, and we are the worse off for it.

What would the opposite of these trends look like? What would a generation that wasn’t hyper-atomized or deeply depressed do instead?

The kind of self-emptying that Brooks described in the life of George Marshall is loathsome to many postmoderns. They think of such a life as unthinking obeisance and passivity. To use one’s life to make commitments to others rather than to “discover” and actualize our own existences runs the risk, many suppose, of becoming what Ayn Rand called “second-handers,” those who only live through the lives of others. But let us ask carefully which is the truly second-hand life: The life of commitment and service and identity in something that lives and lasts beyond us, or the life of the “selfie,” the constant rebranding and submission of our identities into the marketplace of our peers to eagerly await the next “Like” or “Favorite”?

Perhaps we Millennials would live lives of fuller joy and deeper peace if we exchanged, at least in our deepest emotional levels,  being an individual for being a member. Perhaps the ancient words of Jesus are true; maybe losing myself is how to find myself. Some fears that Millennials have of this kind of existence are natural and unavoidable. We fear commitment because we fear losing control over our own lives and becoming stuck. We fear a full-hearted membership in an institution because we fear what that membership may entail to our comfort and agendas. But isn’t life full of risks? Aren’t we dependent and finite beings, risking everything by simply walking out the door? “Now these three abide: Faith, hope, and love.” Aren’t each of those fraught with perils on every side?

This is what it means to live the life God created us to live. We were meant to be joined to God in Christ and then into things greater than our individual identities. This doesn’t require joining the military or going overseas. It does mean maintaining meaningful membership in a local church, and for many Millennials, willingly ending the non-committal adventures of childhood by pursuing marriage and family. These ancient institutions are brimming with greater significance and joy and thriving than a generation drunk on self-help literature could ever dream.

Love indeed de-centers the self. And greater love has no man than this, than he that lays down his life for his friends. That is real love, and real life, and real, lasting, joy. 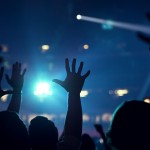 May 7, 2015 The Future of Christian Music
Browse Our Archives
get the latest from
Evangelical
Sign up for our newsletter
POPULAR AT PATHEOS Evangelical
1