The ISIS Mirage vs the Islamic Reality 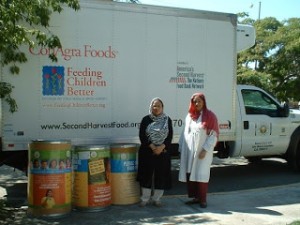 I am a woman, a westerner, and a convert to Islam.

But—as I’m often asked nowadays—to which version of Islam? This is an important question as news media floods our timelines with reports of Muslim women in the west joining the terrorist group known as ISIS. Indeed, ISIS has recruited thousands of Muslim men and women to allegedly fight for the “cause of Islam.” Last week in Bradford, UK, three British Muslim Women and their nine children fell victim to ISIS. In February, three teenage girls also left the comfort of their homes in Britain to join ISIS.

There are two elements at play here, both of which find their nexus in how Muslims are viewed, and how Muslim leaders are failing Muslims.

Of the two, I believe the bigger issue is failed Muslim leadership. As President of the Ahmadiyya Muslim Women’s Auxiliary USA Chapter, I intimately appreciate the burdens of leadership. I am responsible for thousands of women and girls across the United States. I recognize the constant struggle of educating girls on Islamic morals while balancing a western identity. I have discovered that in fact, no material conflict exists between the two. And while this task may appear daunting, I do not stand alone in my efforts.

I lead with confidence is because I have the prayers and support of His Holiness the Khalifa of Islam, Mirza Masroor Ahmad—head of the worldwide Ahmadiyya Muslim Community. Unlike the terrorist who leads ISIS, the true Khalifa of Islam Mirza Masroor Ahmad exemplifies leadership by emulating the compassionate and pluralistic example of Prophet Muhammad. His Holiness invests heavily in education for girls and oversees nearly 600 secular educational institutions worldwide, strategically located in places where otherwise no schools exist. As a former university professor I additionally recognize how critical an investment this really is. Every woman or girl of the Ahmadiyya Muslim Community worldwide is literate and has access to higher education. And every one of us can communicate directly with His Holiness, who spends a significant portion of his time responding to letters and meeting with us personally. Perhaps most importantly, His Holiness recognizes that women are leaders, and empowers us to become leaders not just as mothers and wives, but as scholars, scientists, physicians, activists, and academics.

This courageous and compassionate leadership is lacking in too much of the Muslim world, exemplified over and over again every time a young woman joins a terrorist group like ISIS. I say to these women to forsake the ISIS mirage, and take the time to study and reflect over true Islamic leadership.

Likewise, less than 2 percent of terrorist attacks in Europe were committed by Muslims in the past five years. Meanwhile, Islamophobic propaganda of “Eurabia” and an alleged Muslim takeover continue to promote fear of Muslims. This is having a substantive impact on how people view Muslims – indeed a recent survey uncovered that roughly half of Muslim school children in California report being bullied for their faith. The nonpartisan Public Religion Research Institute conducted a 2011 study on the representations of Muslims and discovered that: “83 percent of Americans say people who commit violence and claim to be Christians are not really Christian, while less than half of Americans – 48 percent – think that self-proclaimed Muslims who commit violence in the name of Islam aren’t truly Muslims.”

Failing Muslim leadership combined with a simply inaccurate view of who Muslims are has created a double edged sword of extremism and ignorance. The antidote is education and compassion through true Islamic leadership, His Holiness the Khalifa of Islam, Mirza Masroor Ahmad, and personal dialogue between Muslims and non-Muslims.

I accepted Islam because I marveled at how Prophet Muhammad elevated the status of women and liberated us from societal traps. I was also deeply moved by his profound love for God and his selfless and loving service for all humanity. Serving as the National President of the Women’s Auxiliary of the Ahmadiyya Muslim Community, USA, has further given me the opportunity to further implement Prophet Muhammad’s true Islamic teachings into action. ISIS ideology, meanwhile, is the anti-thesis of Islam. But Muslim women need not despair, and need not fall into the downward spiral of such a terrorist organization.

Forsake this mirage of extremism, and take a moment to see the reality of true Islamic leadership.

Saliha Malik is the National President of the Women’s Auxiliary of the Ahmadiyya Muslim Community, USA​. Tweet her at @Islam_Press.​

July 7, 2015
American Muslims Have a Race Problem—And Here’s The Solution
Next Post