I read Monday, November 16 letter, “Woman Watched the Males eat”  in Dallas Morning News with first laughter and then anger which lead to sadness. I laughed because of Adele Ford’s over generalization of the situation that the poor wife has no right to speak up and ask for food. I became angry and sad because of the stereotype which resonated from her letter. Why does she assume that the woman has no rights? What if this was a white woman with an older man and two boys and she was sitting watching them eat?  Would Adele have made the same assumption that the woman is not eating because “it’s a cultural happening” or would that situation have made her “stomach sour.” No! Adele and others wouldn’t even have glanced towards her table. Then, why the double standard when it comes to Muslim women who are observing Hijab or Purdah! I don’t know who the woman was but there could be many reasons why she wasn’t eating Subway. Did Adele consider that maybe she wasn’t feeling good, or that she doesn’t like Subway (will eat something else later), she might have eaten already or that she only wanted Kosher or Halal food?

We need to stop this stereotype of Muslims in general and Muslim women in particular! Majority of Americans don’t know anything about the teachings of true Islam or the rights Muslim women have. The only information they have about Islam is by watching or listening to negative news stories on TV or radio. All they see are news stories about terrorist organizations like Al-Qaeda, Taliban, ISIS, and Boko Haram who are only interested in causing destruction by killing anyone who stands in their way, whether they are Muslim or non-Muslim. But what they don’t know is that these terrorists don’t represent true Islam.

Do you know that I have the right to seek an education, to work, right to my income, inherit property, right to choose my husband, and am spiritually equal with men in the eyes of God? The United States Constitution didn’t grant me these rights but Prophet Muhammad and Islam granted me these and many more rights as a woman more than 1400 years ago!

God has said in the Quran that a woman has a soul, that she has the same spiritual capacity as a man, and that she can attain equal spiritual rewards by her own efforts. The Holy Quran says, “But whoso does good works, whether male or female, and is a believer, such shall enter heaven…” (4:125)

Islamic Hijab or purdah (head covering and a coat) is not a restriction on women but is a symbol of modesty. There are Muslim women who are lawyers, doctors, nurses, teachers, and even heads of states and they do this while wearing a hijab!

The spiritual leader of the worldwide Ahmadiyya Muslim Community, Khalifa of Islam, His Holiness Hadhrat Mirza Masroor Ahmad said in his Friday sermon onApril 23, 2010, “We should let the World know that Purdah is for the honor of a lady although some have distorted its form. Purdah is to uphold a lady’s honor. It is in the nature of women to wish for respect and Islam champions the dignity of women. Purdah is not coercion; it marks the individuality of Muslim women and upholds their honor.”

November 19, 2015
Syrian Refugees are not terrorists, ISIS is
Next Post 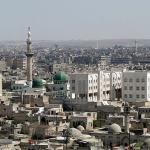