Syrian Refugees are not terrorists, ISIS is 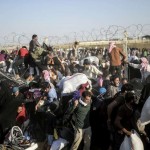 There are millions of Syrian refugees who are longing for a glimmer of hope to breathe freely, to live a respectable life and to be able to give their children a better future than the dismal situation they find themselves in. A single act of insanity like the French attack may jeopardize the chances of millions of legitimate refugees who are searching for a better life.

Initial reports from the French attack, which have now been dismissed, pointed to one of the terrorists allegedly sneaking into France on Syrian Refugee passport. This started a debate here in the US weather to accept the Syrian refugees or not. More than 20 US Governors were quick to issue statements not allowing Syrian refugees in their states. President Obama on the other hand said at the G20 summit that there should not be a “religious test” for our compassion towards these refugees. Syrian refugee crisis is real but what ISIS is doing is clearly not Islamic at all. While the rest of the world needs to be sympathetic toward the Syrian refugees, those who are falling prey to ISIS’ distorted representation of Islam need to learn from the practice of the founder of Islam- Prophet Muhammad.

I am sure the terrorists who were involved in the French attack never bothered to know or cared about the story of early Muslims who migrated to Abyssinia at the time of the Prophet. Had they understood what tribute Prophet Muhammad paid to a just and noble Christian king of Abyssinia- Negus, who gave refuge to the Muslims, they would have never dared to blow up the innocent civilians of France whose country is giving refuge to the Muslims of Syria today.

The story goes like this. In the early days of Islam when Muslims were brutally persecuted in Mecca, Prophet Muhammad permitted Muslims to migrate towards Abyssinia and seek asylum there. He knew that the king of Abyssinia was a just ruler and would not do any wrong to those who lived in his kingdom. Negus, being the fair-mined ruler he was, granted refugee to the persecuted Muslims. This development did not go un-noticed by the Meccans who demanded the return of the Muslims. Negus asked the Muslims to plead their case in his court. Jafar, who was leading the Muslim refugees, presented the Islamic perspective that is worth noting for the Muslims even today. He said . . .

O King, we were a people in a state of ignorance and immorality, the strong among us exploited the weak, when God raised among us a man (Prophet Muhammad), of whose lineage, truthfulness, honesty, and purity we were aware of…. he enjoined us to speak the truth, to be faithful to our trusts, to be merciful and to regard the rights of the neighbors and kith and kin; he forbade us to speak ill of women, or to usurp an orphan’s property; he commanded us to abstain from bloodshed and avoid obscenities; to worship God alone, to offer prayers, to render alms, and to observe fast…. for this reason, our people have risen against us…they have tortured and injured us, until finding no safety among them; we have come to your country, and hope you will protect us from oppression.

Upon listening to this Negus permitted the Muslims to stay in Abyssinian and denied the request of the Meccans. Prophet Muhammad greatly regarded Negus’ compassionate treatment towards Muslims and sent him greetings. After Negus’ death Prophet Muhammad even led his funeral prayer in absentia.

Prophet Muhammad’s gratitude for a noble Christian king behooves Muslim refugees to be grateful to those who are accepting them with open arms. Muslims needs to become the embodiment of the true Islamic teachings that Jafar presented in front of Negus. Muslim youth in particular needs to reflect on the practice of the Prophet instead of being carried away by the ISIS propaganda. ISIS is synonymous to terrorism, there is nothing Islamic about them.

Millions of Muslim hearts are aching right now due to the France tragedy. It was a crime committed against humanity. Muslims stand with the people of France. Together we can defeat terrorism.