As I left my mosque in Philadelphia Friday afternoon my phone lit up with texts and tweets about attacks in Paris.

Muslims have been conditioned on how to respond to these attacks. First, we feel pain for the loss of life. And most certainly my heart sank as I saw the horrific aftermath of the Paris attacks. Then, almost as quickly we hope the attackers aren’t Muslim. We know that if the attackers are Muslim, we’ll soon find ourselves lumped into one category with every Muslim who has ever done anything wrong. While everyone finds it preposterous to ask Christians to answer for the KKK in America, the LRA in Uganda, the IRA in Ireland or Christian militias in CAR, among other so-called Christian terrorist groups, the same rule doesn’t seem to apply to Muslims anywhere. Therefore, and finally, we passionately take to social media, op-ed writing, and mainstream media interviews to discuss how strongly we condemn these attacks.

But even then we’re stuck in a catch 22.

Those who know we condemn terrorism, as any decent human being would, feel sorry for us that we have to make such statements to “prove” ourselves. Those who ignorantly believe we endorse terrorism claim we’re lying, diverting, or even ignorant to our own faith.

It appears there’s no way out of this vicious cycle. Or is there?

The goal of ISIS is no different than monsters like the Christian Charleston South Carolina racist terrorist, the Pagan Virginia would be synagogue bombers, or the new atheist Chapel Hill anti-Muslim terrorist. That is, such groups and individual terrorists seek to primarily serve as the violent spark that creates a bloody and lasting war between two sides. This is their oft stated goal when captured, in their propaganda material, and after every bloody attack comes to fruition–start a war.

And here precisely lies the opportunity to break the vicious cycle.

As Muslims reach out via social media, op-eds, and news media, non-Muslims have a choice. They can choose to buy into the terrorist narrative — and thus into fear and misinformation — or they can try something new. Non-Muslims can learn about Islam from Muslims, the people who know Islam best. The key to defeating ISIS ideology rests not in shunning Muslims, demonizing Muslims, or attacking Muslims — but in understanding and befriending Muslims.

Tragically, this didn’t happen in the aftermath of Charlie Hebdo terrorist attack last January. In the three days after Charlie Hebdo, French Muslims suffered at least 116 anti-Muslim attacks. Some 80% of these attacks were against Muslim women. And this is not just a “Muslim” phenomenon. In the immediate days after the Charleston terrorist attacks, at least seven more black churches were burned down, either due to arson or “unknown” reasons.

Today France, and indeed non-Muslims everywhere, have an opportunity to instead respond by befriending Muslims and seeing first hand that just like the KKK, LRA, IRA, and CAR Christian militias, ISIS represents only terrorism–not any religion, and not Muslims.

Moreover, this approach aggressively counters youth radicalization. Those youth whom ISIS wants to attract to their barbaric cause instead see first hand that a response of love from non-Muslims is far more powerful than the hate to which ISIS invites them.

The day after the Paris Attacks, TERRORISM HAS NO RELIGION trended on Twitter, indicating we are on the right track of understanding. His Holiness the Khalifa of Islam Mirza Masroor Ahmad delivered this message when asked how Muslims should respond to terrorist organizations, explaining,

“Whenever any jihadist organization stands up in the name of Islam and misconstrues its true teachings, we have to stand up to this and speak out. These are militant groups, not followers of the true religion, and we always stand against them.”

Today we stand up to these terrorist organizations with that critical component of dialogue. Rather than letting such groups incite war, now is our opportunity to drown out their fear and misinformation with dialogue and education. Now is the time to stand united as one humanity against all forms of terrorism.

Qasim Rashid is a national spokesperson for the Ahmadiyya Muslim Community USA and a visiting fellow at Harvard University’s School of Islamic Studies. Follow him @MuslimIQ . This originally appeared on Huffington Post.

November 14, 2015
ISIS is UnIslamic - That's a Fact, Not Just Hollow Words
Next Post

Muslim
ISIS Terror Group is An Enemy to All,...
Islam Ahmadiyya 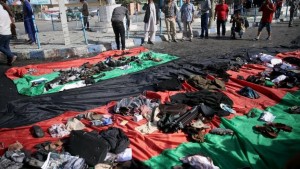