We spend most of our lives making distinctions, black/white, good/bad, high/low, clean/dirty, gay/straight, cool/uncool, day/night, fat/thin, orthodox/unorthodox, Christian/not Christian, Sunni/Shia, Buddhist/Muslim, Israeli/Palestinian, Canadian/American, white/ Hispanic,  Native American/white, dead/alive, old/ young, hip/unhip, Cougar/Husky … it goes on and on… fast/slow, dumb/smart, tall/short, Democrat/Republican, worthy/unworthy, rich/poor, North/South, slave/free, nice/mean, saved/unsaved, gun rights advocates/gun control advocates; it can go on and on…. In a sense our whole news cycle is based on distinctions between libertarians and liberals, conservatives and radicals, right and left, Crossfire is back (and nobody cares), and we try to grind down the other side. No one likes it really, but it sells doesn’t it?

Why do we even watch? We even try to do this either/or stuff in the latest Iraq trials, but of course, the truth is much more muddled. I’ve noticed that when real experts talk about the Middle East, the news people cut them off because the analysis is too complex, well of course it is… there is no simple story, every situation is complex and we distort reality by trying to mash everything into tidy little binaries. It’s dumb, useless and unchristian and I would argue, unbiblical.

We separate, what brings things together? Our scripture today is a beautiful ancient hymn, a song that celebrates the Christ, the Logos (the divine ordering principle of all reality, I like to say). That is, this hymn has deep philosophical roots that go back to Plato, but move through the New Testament in forms of the mystery cults, and are taken up by early Christian leaders and thinkers. Yes, Christianity borrows from all around its cultural foundations, Greek, Roman, Hebrew, and in this hymn we hear similar notes that are also in the Gospel of John, where Jesus is talked about as the Word of God, that is the Logos of God. Logos in Greek is not just word in the simple sense, it is a principle of living reality that guides and directs all things. Through him (Christ) by him (Christ) all things were made. That is, in Christ, the very sinews of reality are stitched together; the very DNA of who we are is formed first in Christ in God; the very evolutionary movement of creation has its initial form and agency because of the Word, and that Word is from God in Christ creating as our Scripture proclaims, ALL THINGS on heaven and on earth.

My daughter Georgia, when she was young, once came out to see what I was doing in the garden, and she said, “Daddy, what are you doing?” And I was digging in the garden dirt to plant a bush, and I said, “I’m digging in God’s body, this dirt is God’s flesh.” And she said, “That’s weird.” And walked away. But that’s it isn’t it. It’s that literal. The other night I was with someone I care about and looking at the Western horizon as the sun was setting, and I said, “I wish I had eyes to see the design behind this exquisite sky….” The sky was brilliant with blues, greys and pinks, just stunning, all made in Christ and by Christ and for Christ. This creation, our lives, our bodies, our clothes, our thoughts, our senses, everything contains traces of the divine, the Word, the Logos, the divine ordering principle; it’s awe inspiring isn’t it? And it’s biblical, so biblical. We might say, “We should walk around all day long in awe, seeing each other, the water, the animals, stunned by creation.”

And it just gets better. Because in this great hymn there is nothing outside of God, nothing that is too low, too dirty, too stinky, too evil, nothing on heaven or earth that can escape God’s love and redemption. God has reconciled all things to himself through him (that is the Christ).

We divide friends, God in Christ reconciles. We demonize; God wants to divinize. We scapegoat; God in Christ says NO to scapegoating. We gossip, God yells at us, “That is a child of God!” We look with fear and hate upon those who are different. And Christ says, “To them, to these least, lost, last, to the despised, to these belong the kingdom of God.”

Okay, I have crush on Maya Angelou. I know, weird, it’s true. She just passed away, but I can’t stop watching her videos, and reading her amazing autobiographies. She never attended college, but she became a college professor and Pulitzer Prize nominated author; it makes me think that maybe I wasted my time with all my schooling! She rose from a difficult background, raped as a young girl, she became mute for six years as a kind of silent protest; she was later a prostitute, an unwed mother, but in time she drew herself up, and in midlife she simply said, “I will be more.” She dreamed big and it was based on this beautiful truth: 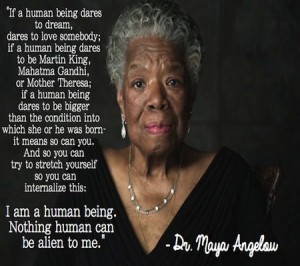 That last line has become a deep inspiration for me. “Nothing human can be alien to me.” It comes from the playwright Terrence, of the early Roman empire. Publius Terentius Afer (200 BC), better known in English as Terence , was a playwright of the Roman Republic, of North African descent. His comedies were performed for the first time around 170 BC. Terentius Lucanus, a Roman senator, brought Terence to Rome as a slave, educated him and later on, impressed by his abilities, freed him. Terence died young, but all of the six plays Terence wrote have survived.

One famous quotation by Terence reads this way: “Homo sum, humani nihil a me alienum puto“, or “I am a human being, I consider nothing that is human alien to me.”

This is so biblical, so swimming in the stream of God’s living Word pulsing in and through us: Nothing human is alien to me. Every single one of us is born in God, formed by God, and carries the great DNA of the Logos, the Son of God, who not only created all things, but reconciled All things to God in Christ. The great hymn of the Christian faith is precisely a universal proclamation that all that has being is created in Christ, for Christ and reconciled by Christ in God. There is nothing separate from this God in Christ—no thing, no thing, no thing.

But it gets better. Maya Angelou was speaking with Dave Chappell, the very well known and controversial black comedian. Chappell, by the way, is a Muslim. He explains that his faith gives him strength and consolation against the insanity of Hollywood. He is deeply committed to peace between Palestinians and Israelis. And he had come to Maya’s home as a kind of pilgrimage, as a student, to be taught by a master. And Maya told him this story that is for me, a Jesus parable, a parable that illustrates not only what Jesus would do, but what Jesus is, creating all things, reconciling all things.

Maya described that she was invited to do a cameo for a Hollywood movie, Poetic Justice. And, at one point, on the set, Maya heard two young African American young men arguing, swearing at each other. And she went up to one of them, and said, “Excuse me…” and he continued to curse, and she said, “Alright, I’ve heard that before … has anyone told you how important you are?” And then she said, “Did you know our ancestors were laid in slave ships, spoon-like, lying in their own feces, and urine and menstrual flow, so that you could live? Did you know that they were put on auction blocks and sold, so that you could live?” And then she said, “Do you know how important you are?” 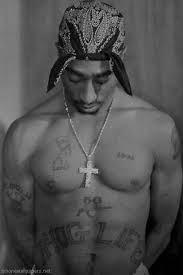 And by that time in the conversation, the young man was in tears, and all Maya could do was wipe the tears with her hand. Later, she found out it was the rapper, Tupac Shakur, one of the most popular and notorious rappers of his time. Maya had not known who he was. Tupac’s mother later wrote Maya and said, “I think you saved my son’s life.”

Nothing human is alien to me. Indeed, this is the Christ, everything that is human is already in Christ, created by Christ and redeemed in Christ through God the Father. We are simply the instruments of that redemption of that profound reconciliation. This is our ministry.

I’m going to end with a little controversy. So, hold on to your hats. Just this last week, the Presbyterian Church USA, our denomination, voted so that our clergy can officiate at gay weddings in states where it’s legal. Okay, I know, for some of you this is old hat. It’s about time. For others, this is just one more reason to leave the denomination. How can they bless sin?

For me it is one more sign of how the redemptive love of Christ is being lived out in our world and it is beautiful. You see I grew up in a family and in a time where using homophobic slurs was common; apparently that made us think we were real men. Interestingly, only at Princeton Seminary did I meet and become friends with gay and lesbian folks, and I didn’t even know it. I had become good friends with a group of men and women on the Princeton campus early on. And one day, someone said to me, “Are you gay?” And, of course, I was shocked, “NO, I’m not gay.” And, to be sure, that kind of protest looks like you really are in denial. It was a shock to realize that my friends were people that many chose to reject. And this began a long journey of reading everything on the topic, the Bible and its many interpretations. I worked it through and for me, legalizing gay marriage is God’s will, God’s reconciling will that I support.

Of course, not all agree, and the beauty of the Presbyterian Church Constitution is that people of good will can disagree. So I’m sure some will disagree with me. And that’s fine. I accept and love all and see in all things the potential for reconciliation; the ministry of Jesus Christ is precisely that – reconciling, reconciling, reconciling all beings in Christ to God.