I’m with the Nasty Women 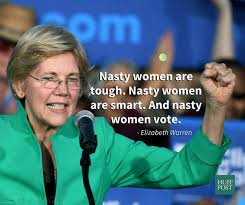 I’m with the nasty women for lots of reasons! I’m reading John Caputo’s The Weakness of God. I love this: “Suppose, in addition, Jesus said that the sinners would get priority seating in the kingdom, that there was some kind of preferential priority, not just for the poor, which in a way is “fair,” but for the wicked, which is not fair. If he did indeed say, “the tax collectors and the prostitutes are going into the kingdom of God ahead of you” (Matt. 21:31), that would have added fuel to the fires. That would indeed constitute a certain madness, as Derrida would say, an act of forgiving that utterly jettisons the demand for a reason for forgiveness, which inserts forgiveness into the poetics of the impossible…” (p. 220) So yes, I’m with the nasty women, a certain Jesus madness!

November 11, 2016 Resilient Peace in the Time of Crisis
Recent Comments
0 | Leave a Comment
"Do you mean that we should not have a separation of church and state? If ..."
Judgeforyourself37 Time for a New Confessing Church
"James, I'm new to your work and who you are. Hey, I appreciate what you ..."
Peter E. Watts Driscoll on Patheos: My Request for ..."
"I think the designation "Mainline" had more to do with mainstream theology than with being ..."
jekylldoc Bullish Times for Religious Progressives?
"Interesting viewpoint. I know lots of conservatives who give time and money to service, and ..."
jekylldoc Bullish Times for Religious Progressives?
Browse Our Archives
get the latest from
Progressive Christian
Sign up for our newsletter
Related posts from James Wellman on American Religion