Do Black Lives Matter to the Church?

As a white person, it is difficult to write about racism claiming any sort of moral high ground, but not to talk about it is a deep moral error.

I have heard people of color say that in these kinds of conversations, they often find themselves doing most of the work to educate white people. Either that, or feeling like they have to lighten the mood and keep their real thoughts shut up inside so as not to bruise the egos of their white friends. This is evidence of the term, “white fragility,” which describes the way in which many white people are reluctant to engage in discussions about race for fear of getting corrected in their ignorance or even worse, appearing racist.

In younger years I found myself deep in the mud of these blunders, saying things like, “I don’t see color.” Though my heart may have been loving, my method was perpetuating a cultural erasu 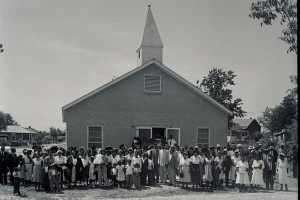 re of seeing the truth of black culture. And it is this kind of mentality that inflicts deep wounds into the psyche of black culture again and again. And when one is not seen, what does that do to what one believes about themselves and about what God desires for them? We as white people must look and see what we have done and what is still being done. We as white Christians must face the unveiling of any actions that are contrary to the heart of God and we must stand against them.

In reading Karen Baker-Fletcher’s Dancing with God, she quotes Mamie Till, whose son Emmett was brutally murdered for false accusations of flirting with a white girl. Mamie called for the world to face the facts of this unjust horror, crying, “Look!…See!…Get delivered of your demons and look!” As white people, what makes us not want to look, to look at the marred bodies and blood, to look at things we’ve perpetuated?

Multicultural scholar, Robin DiAngelo, focuses on racial bigotry among white progressives, whom she calls her most difficult audience. Difficult because of their self-perception that they are already aware and informed and engaged. When interviewed by the Seattle Times for an article entitled “Let’s Talk About Race,” DiAngelo argues, “Even if you marched in the ‘60’s, you are not certified racism-free for the rest of your life.” “For many whites,” she continues, “being a good moral person and being complicit with racism are mutually exclusive.”

White fragility remains because whites don’t have to talk about racism; our jobs, our safety and our lives do not depend on it. White people are the ones who have allowed systemic racism to continue. As I have heard it said, “racism is a white people issue.” And because we have not been traumatized by it, we do not have to grieve it and because of this, it continues and people of color are victims because or our lack of awareness.

The history of racism against blacks casts a long shadow over their lives. During the days of slavery there were different types of preaching within the black church. Some focused on the lib 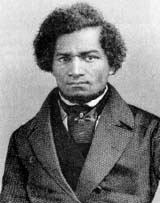 eration of the spirit and others prophesied for liberation from the systems of racism. The story of Nat Turner illustrates how a southern black slave and preacher moved from preaching salvation of the soul to the salvation from chains of slavery that crushed everyone around him in spirit and in body.

In Turner’s early days of preaching, he attempted to encourage his people with the hope of glory and the sweet by and by of heaven to come. But as he saw and experienced the horrors of slavery and how his brothers and sisters were tortured, both body and soul, he knew that salvation meant not only freedom in spirit but freedom from domination. For the oppressed to be free, they must not only hear mercy but must know justice. One without the other lacks the full power that the gospel demands.

In 1968, Martin Luther King Jr., knew his people may be free in spirit, but they still lacked economic opportunity. In his last days he prepared to lead “The Poor People’s March” in a protest against Washington. As whites too often we only hear King’s cry for mercy but his final challenge was for justice, for economic opportunity for his people, for all people. To be free in spirit and in body. 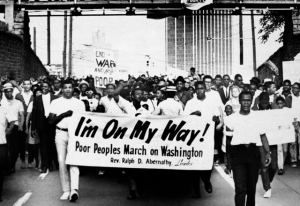 The Poor People’s March demanded economic human rights for poor Americans of all backgrounds. Three thousand people camped out on the Washington Mall for six weeks that spring to stand for the right that all people should have what they need in order to live. In his last years, King focused more and more on issues of poverty and human rights for everyone, in the U.S. and around the world. His non-violent resistance demanded equality for all people, and sought to overcome systemic elements of injustice wherever it was found. For King, and for us, it is not enough to have a theology that all are equal.  The soul may be free but if unjust social and economic structures remain there is no true transformation.

To be sure, in the time of slavery, justice was a dream and paradise the only hope.  And slaves, having been beat into a brainwashed slave-consciousness cowered in terrible submission. Nonetheless the deep sense of injustice would cause many to rise up.  Nat Turner and his band of revolutionaries stood on the truth that the gospel promised liberation now.  They could not just promise heaven, without also preaching deliverance from the chains of their hell.

So too, if whites today are merely preaching the hope of heaven and glory days to come, but failing to preach and stand for liberation for the oppressed here on earth, their gospel is empty and becomes an excuse not to do the hard work of justice. If the church today is not standing in the pulpit calling out that “Black lives matter,” and speaking out against racial oppression and injustice in the here and now, they are missing the heart of Jesus, who taught us to pray, “May Your Kingdom come, your will be done, on earth as it is in heaven.”

February 27, 2017 Princeton Theological Statement Against American First
Recent Comments
0 | Leave a Comment
"Do you mean that we should not have a separation of church and state? If ..."
Judgeforyourself37 Time for a New Confessing Church
"James, I'm new to your work and who you are. Hey, I appreciate what you ..."
Peter E. Watts Driscoll on Patheos: My Request for ..."
"I think the designation "Mainline" had more to do with mainstream theology than with being ..."
jekylldoc Bullish Times for Religious Progressives?
"Interesting viewpoint. I know lots of conservatives who give time and money to service, and ..."
jekylldoc Bullish Times for Religious Progressives?
Browse Our Archives
get the latest from
Progressive Christian
Sign up for our newsletter
POPULAR AT PATHEOS Progressive Christian
1

How come I can't see you...
slacktivist
Related posts from James Wellman on American Religion

Rich Mullins: Born On This Day in 1955
"And the moon is a sliver of silver, like a shaving that...
view all Progressive Christian blogs
What Are Your Thoughts?leave a comment
Copyright 2008-2021, Patheos. All rights reserved.