We go to a church near us; we can get there in five minutes. We are usually late. The preacher is Richard Dalhstrom. After retiring from ministry at my church on Bainbridge Island, I’ve taken a break from active ministry—okay, I burned out. I knew about Richard because he was one of the pastors in my book on vital, Pacific Northwest churches, called Evangelical vs. Liberal. Richard stood out, unaffected, blunt, Jesus-centered, and crazy for justice—my kind of guy.

So it was easy choice to go to his church. Dalhstrom’s sermons brim with stories that pack a punch; he loves scripture and he shows why. He is what I would call a progressive evangelical, devoted to Jesus, partnered with a love for refugees, the poor, and committed to the wilderness—he once said, “I’d rather be skiing than preaching.” He wears REI stuff to church. He’s the kind of evangelical we find in Europe today; most American evangelicals would call them liberals. He rides his bike around town. He is no fan of Trump, but he doesn’t talk politics, directly; he let’s people think for themselves. He knows he doesn’t know everything, but he is committed to his message.

The “talk” on Sunday made me think—which is, by the way, the highest compliment I can give a sermon. It was from the Gospel of John, that peculiar saying of Jesus, from chapter 6: “47 Very truly, I tell you, whoever believes has eternal life. 48 I am the bread of life. 49 Your ancestors ate the manna in the wilderness, and they died. 50 This is the bread that comes down from heaven, so that one may eat of it and not die. 51 I am the living bread that came down from heaven. Whoever eats of this bread will live for ever; and the bread that I will give for the life of the world is my flesh.’”

Like I said, a strange pericope—the Gospel of John, according to most scholars, was the last gospel written down. Jesus is talking to his fellow Jews; Jesus is out there—a prophetic character unlike any. He says he’s the way; he doesn’t point to the kingdom of God, as does the figure of Jesus in Luke, Matthew and Mark, he embodies it. The Jews reject him, and he is left with his twelve disciples. He speaks bluntly and dreamily of his Son-ship; his close relation to the “Father.” With a stunning confidence, he claims that it is only in him that abundant life is found.

Even as a kid, Jesus riveted me. So bold, and yet so humble, willing to give himself for others; the Sermon on the Mount became my social ethic. Jesus did not seek fame, fortune or power. Early in the Gospel of John, chapter 6, his followers try to make him king, but Jesus walks right through them into the hills. Jesus seeks nothing other than to serve and die. 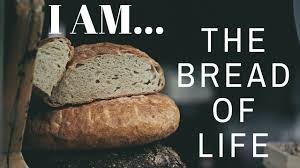 There is something funny here, I’ve recently admitted that bread makes me sick—but I love bread, and I hate non-gluten substitutes. It’s a conundrum. I am the bread of life has a hard edge for me. In communion, Jesus now comes in a non-gluten form, thank God. But let’s go back to that point, ONLY in Jesus is abundant life found, only in Jesus is truth experienced, only in Jesus do we feel home.

Recently, I’ve been jarred by periods of hypertension. Truth is, I’m in great shape, recently married, and very happy. My job is going well; I’m a successful author, teacher and sought after speaker. Why do I have high blood pressure? It’s a strange phenomenon; its like life is slapping me, slow down my friend, don’t reach too far for too much—you’re stressing yourself out!

Yes, yes, yes, I’m listening, seeing my doctor; I’m eating better, no bread! I exercise more, and do stress relieving prayers, where I meditate. In my mind’s eye, I imagine what’s stressing me, and then I let it go. I literally feel my body relax, a deep, ambient peace. It’s like a warm pool in a cold place.

So is Jesus’ message right? I think so. The external world doesn’t cut it. The peace that most of us really want is the warmth and presence of love. The external things of life don’t fill that void. So, from that angle I get it, Jesus has a point. But is he the only place where it can be found? Well, I’ve been in the presence of many folks who seem to have it, some who are in different faith systems and some in none. So it seems less than empirical to say that it is only in Jesus where peace is found. So, I’ll let somebody else make that judgment. 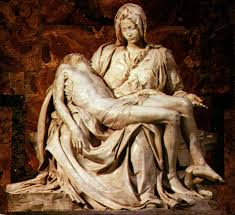 e enough there is some scholarship that suggests that El Shaddai, can be translated “a pair of breasts.” Well, I think we should add this to another I am clause, “I am a pair of breasts.” Bread isn’t exactly working for me these days. In the image of the breast there is a sense of coming home. We find what we have always sought: fullness, warmth, and fulfillment, which are both real and generative. This is an image of a generative, loving, nurturing God who says I am your home, your heart, your breast, all that you need, here, you can have it in me, by me. To that God, I say, Amen.