When the press doesn’t “get religion”: headline-writing the United Methodist “divorce” 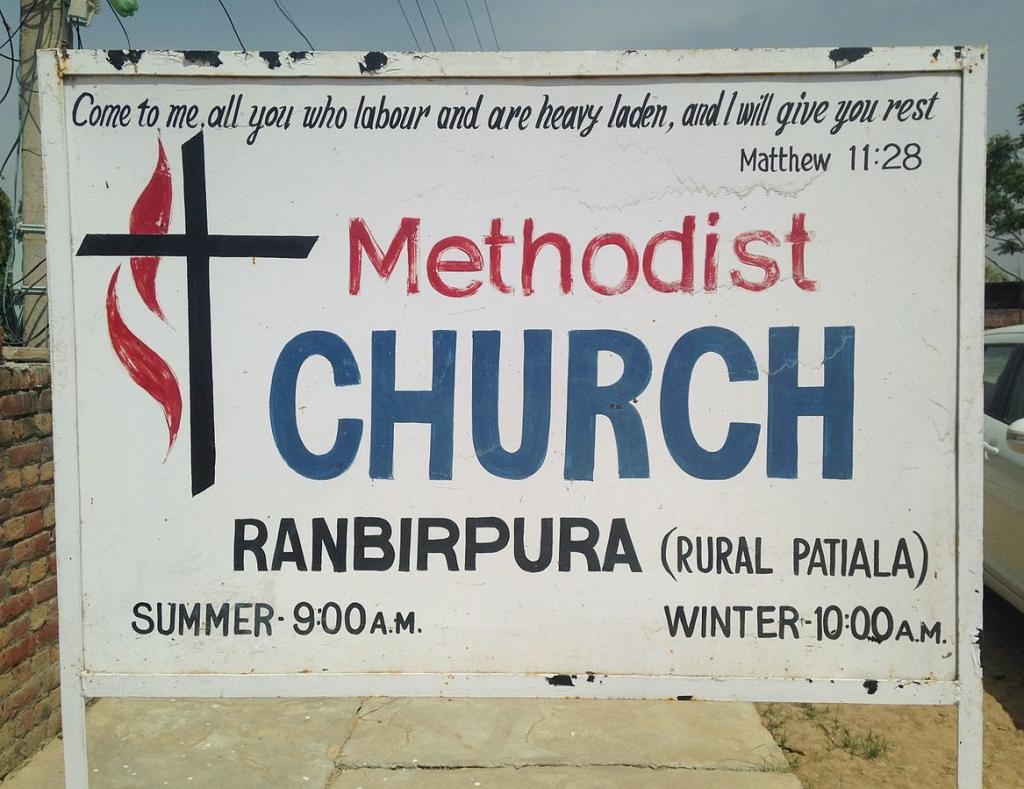 Here’s the headline of the Chicago Tribune‘s online article about the United Methodist split announced on Friday and reported on Saturday:  “United Methodist churches that oppose gay marriage and clergy will break away, form new religion: ‘We came to an impasse that can’t be bridged’.”

Here’s the headline in the printed version: 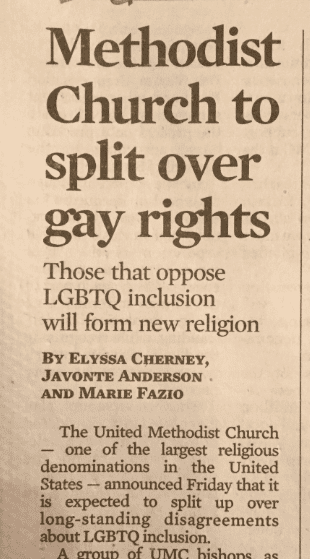 Now, I’ll assume that, as readers of a website devoted to religion, whether or not you identify as believers, you understand the basics of the major world religions.  And I therefore shouldn’t need to say this, but I will anyway:

“Methodism” — or more specifically, “breakaway traditionalist Methodism” — is not a religion.  It’s a denomination.

This should be basic knowledge without which no one should be able to hang their shingle as a religion reporter, or, really, a reporter, headline writer, or newspaper editor of any kind.  Yes, I get it that Americans are less likely to identify as believers than in the past, and that reporters might well be even less likely to than the typical American, at least given the whole “no one I knew voted for Nixon” business of a generation ago.  But this should be a basic piece of knowledge that comes with being sufficiently educated to manage to be hired in the newspapering business.

After all, imagine the objections you’d hear if a newspaper claimed that Shite and Sunni Muslims were different religions.

Next, look at the text of the print article:  it’s “those that oppose LGBTQ inclusion” who are severing the bonds of religious kinship.  It’s a throwaway line, and presumably a wholly unconscious bias on the part of the headline-writer, to use labelling which casts one group as the bad guys, excluding others, rather than respecting the theological differences between the two groups.

And the online headline is at least correct in limiting the content of its headline to gay marriage and gay clergy, though both the online and the print version of the article come from a mindset that’s so conditioned to using the category “LGBTQ” that it cannot recognize that the split was due specifically to the question of same-sex relationships, and had nothing to do with transgender issues at all.

(What do Methodists think about transgender issues?  The Human Rights Campaign, back in February of 2019, said that “Transgender ministers have served United Methodist churches. There is no policy excluding them from ordination. An attempt to deny ordination to transgender persons failed at the General Conference in 2008.”  A 2017 article from United Methodist News further explains that “Good News, an unofficial United Methodist group that advocates for maintaining church teachings on homosexuality, has never made a definitive statement on transgender clergy” and cites a leader within that group who confirms that they hold no “official” position but believes that others in the group would share his opinion that transgender people are “probably” not suitable candidates for ordination and that, in general, these people’s needs should be met by eliminating “gender stereotypes” and “cultural expectations” so that they could live as their natal sex in whatever nonconformist way they felt suited them.  In any event, absent further reporting otherwise, it appears that the split was not driven by T issues but by L and G issues, but that progressives have so cemented those groups together that they cannot be untangled, at least not in these reporters’ minds.)

And that’s the limit of what I have to say about the split.  I guess if the Germans do end up splitting to form their own German Catholic Church, we’ll see if American religion reporters and headline writers have any better grasp of that event.

Yes, this is an old image and I really could stand to have found one of an American church but I recall it being difficult to do so at the time anyway.  Oh, well.

January 15, 2020 Why The Harry-And-Meghan Drama Matters
Recent Comments
0 | Leave a Comment
Browse Our Archives
Related posts from Jane the Actuary