“Freedom,” Winston writes in George Orwell’s 1984, “is the freedom to say that two plus two make four.  If that is granted, all else follows.”

Is there an objective truth?  Postmodern intellectuals have been insisting that’s not the case for long enough now, though, of course, once-upon-a-time that was in the sense that there is no objective “right” or “wrong” morally speaking, or that what defines great literature or art is not objectively discernable (nor is it possible to discern what it objectively means), or that there is no way to identify one culture as “superior” to another, or that the “truth” of a historical narrative which paints European men as “great” is complicated, or the like.

When “ethnic studies” encroached into mathematics and the sciences, the intent was reasonably unobjectionable:  if there are lies, damn lies, and statistics, and statisticians had used statistics with ill intent (for example, to redline black neighborhoods), then a new generation should harness the power of statistical analysis for good instead. If there were women or racial/ethnic minority folk whose contributions to science had been erased, then, insofar as students learn the history of science or mathematics, their stories should be included.  And that’s fine.

But we’ve moved beyond that.

Here’s a tweet, well, going on a couple weeks ago by now (yes, I let this draft sit for a while).

The individual has now protected her account (that is, tweets are only view-able by permission).  She gives her LinkedIn profile, but seems to have also taken that down.  She identifies herself as a “teacher, scholar, social justice change agent, PhD student, architecture enthusiast, wannabe math person, BLM always. . .”  but what she’s studying isn’t clear.   A website defending her says it’s “critical mathematics education.”

This sparked other replies on twitter, including the following: 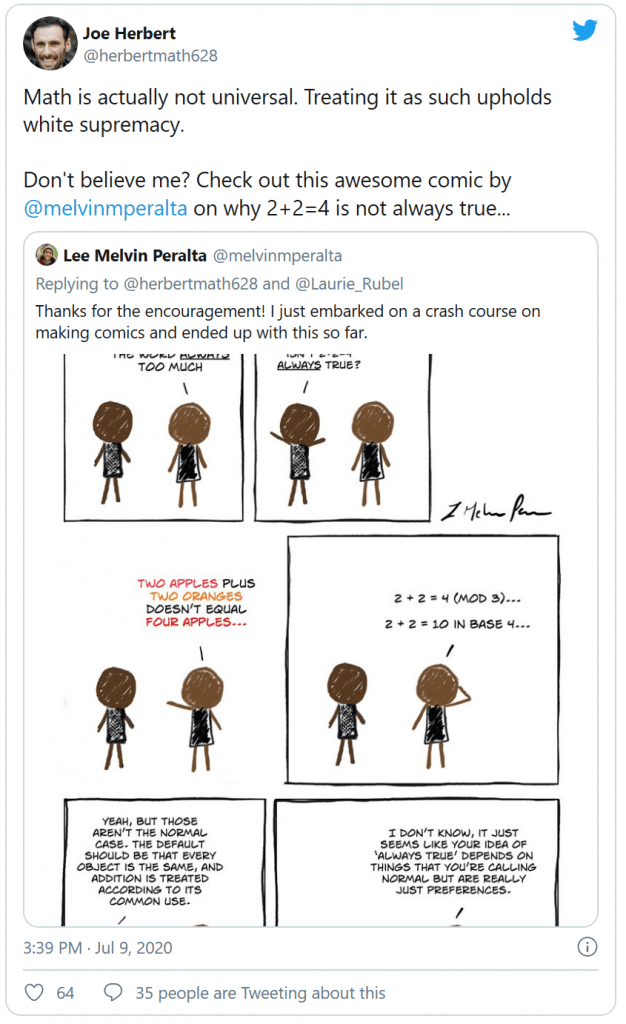 This account is now also protected.  The individual in question, Joe Herbert, identifies himself as a “master teacher.”  The original tweet, from Lee Melvin Peralta, still exists at this writing and Peralta in his bio identifies himself as “fil-am, grad student, former ms math teacher, trying to decolonize all the things.” 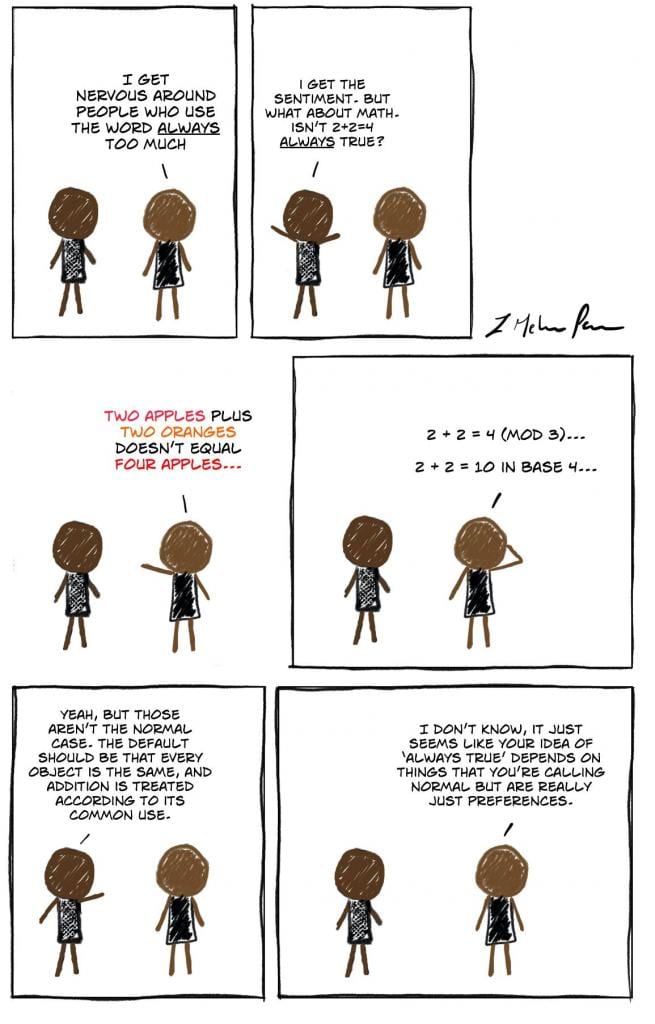 It should go without saying that this is nonsense; it is understood by everyone, including these activists if they were honest, that “2 + 2 =4” means “two units plus two units equals four units,” and that no culture uses a base 4 or similar mathematical system because of the functionality of base 10.  Heck, even in base 12, which one might say we implicitly use when we refer to a quantity as “two dozen,” 2 + 2 is still four.

And that tweet was in response to a thread by Laurie Rubel, in defense of Marshall, which I’ll admit I can’t quite make sense of it, but, until it’s removed/she protects here account, here’s a link, and at any rate, here’s the thread:

So what’s this all about?

These are all academics, but they are actively teaching the next generation math, or teaching the next generation of teachers who will be doing the teaching.  They are heavily promoting the idea that mathematics education for racial/ethnic minority children should be transformed along principles of “ethnic studies.”  And this found its way into a “Math Ethnic Studies Framework” at the Seattle Public Schools which caused outrage, then misplaced defense by local media but, when I dug into it, claimed that students should learn that “people of color” (in the modern, anachronistic sense) invented mathematics, that non-“Western” forms of mathematics have been suppressed, and that mathematics had been a tool of oppression but should be used instead for social justice purposes.

And just the other day, Steven Welliever looked at the mathematics test scores of students in schools piloting this curriculum.

Sources:
Part 5 of 5, The Failures of Ethnic Studies (and how to fix them) by Castro-Gill, Seattle ES program manager.https://t.co/qddXtpDzVg (scroll down) 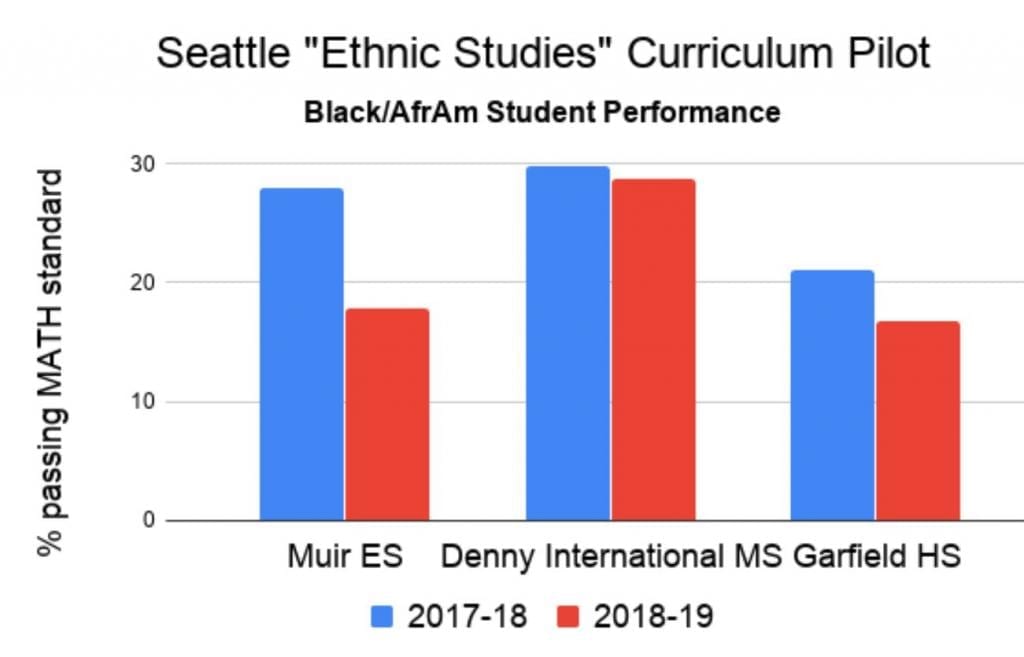 Closing “Achievement/Opportunity” gaps is a Western way of thinking about education. It’s linear and views students as lacking something and needing to be turned into some ideal, which is defined by white supremacy. Ontological distance, as defined by Dominguez and expanded upon here, is a process, especially since race and identity are dynamic and constantly shifting. The needs of the communities we serve will change depending on circumstances. For these reasons, ontological distance should always exist. We should never “close” that gap because it provides space for reflection and growth.

It’s from a long and jargon-filled series of blog posts, at a website called “Ethnic Studies Now,” which is a group of “educator activists” pushing for, as the name implies, “ethnic studies,” in Washington state and Seattle in particular.  And one of their premises is that they should not be measuring student achievements, but only measuring the degree to which the curriculum/teaching methods are properly reformed — and they reject the notion that poor performing kids need to be “fixed”:

From my perspective, this focus on “Black Excellence” [a tutoring program] implies that Black students are in need of fixing, especially when an entire department is created and coaching positions are needed in schools with high Black student populations. . . .

But, more importantly, I want to point out that at no point does the Ethnic Studies model suggest changing students. Students and their families are part of the inputs and outputs, but the responsibility for change is on district staff. . . .

It’s hard for me to put aside my initial response to the “Seattle (Black) Excellence” initiative, one of a deficit model. We need to work towards building an educator force that recognizes and values the excellence that ALREADY EXISTS in Black students and other students of Color.

What does this mean?  They can’t really be indifferent to how well students learn the course material they will need to succeed in higher education or in a skilled trade or another occupation, can they?  Surely this is all just jargon?  Maybe they simply want to ensure teachers are properly motivated to teach, and to believe that their students are capable of success?

But here’s where we revisit Orwell.

Consider that when Orwell wrote of 2 + 2 = 4, he was not concerned with a society that had become unmoored from truth and was floundering because its members could not “do science” any longer, because they did not believe they were objective realities.

The reason why it mattered whether 2 + 2 = 4, was not that “there is no objective truth” but that “the party decides what is true.”  To make decisions about what is or is not truth, or history, is to exercise power, and it is the Party’s goal, above all else, to exercise power.

As O’Brien tells Winston after he is imprisoned, “Whatever the Party holds to be truth is truth.”  And, later:

“How many fingers am I holding up, Winston?”

“And if the Party says that it is not four but five — then how many?”

O’Brien’s objective is not merely to compel Winston to censor himself, to accede to his demands, to conform outwardly, but indeed to be converted, to inwardly believe that the Party is the source of all truth and reality.

Later, with respect to questions of astronomy, O’Brien asserts that the sun revolves around the earth, then says,

“For certain purposes, of course, that is not true.  When we navigate the ocean, or when we predict an clipse, we often find it convenient to assume that the earth goes round the sun and that the stars are millions upon millions of kilometers away.  But what of it?  Do you suppose it is beyond us to produce a dual system of astronomy?  The stars can be near or distant, according as we need them.  Do you suppose our mathematicians are unequal to that?  Have you forgotten doublethink?”

The bottom line is that this debate is understood by flipping around Winston’s statement into the following:  “Power is the power to say that two plus two make five” or, more precisely, to compel others to accept this assertion.  And if children in poor neighborhoods are subjected to this curriculum, in pursuit of power, and their ability to succeed as adults is all the more limited, they won’t be the only ones harmed.

July 19, 2020 Revisiting the Great Depression - part one: was it truly global?
Recent Comments
0 | Leave a Comment
""the pre-enslavement history of Black people from 3,000 BCE to AD 1619, including instruction about ..."
Spinosaurus In which, apparently, the country has ..."
"They finally appeared, and I edited just a bit for clarity and then they disappeared ..."
Mike Petrik A brief rant on names and ..."
"I can sympathize with Concerned Black Woman in that it really can cause weariness to ..."
Ame “Whiteness” — and the insolvability of ..."
"Thanks. Not clear to me what trigger words I might have used unless the filter ..."
Mike Petrik A brief rant on names and ..."
Browse Our Archives
get the latest from
Jane the Actuary
Sign up for our newsletter
POPULAR AT PATHEOS Catholic
1 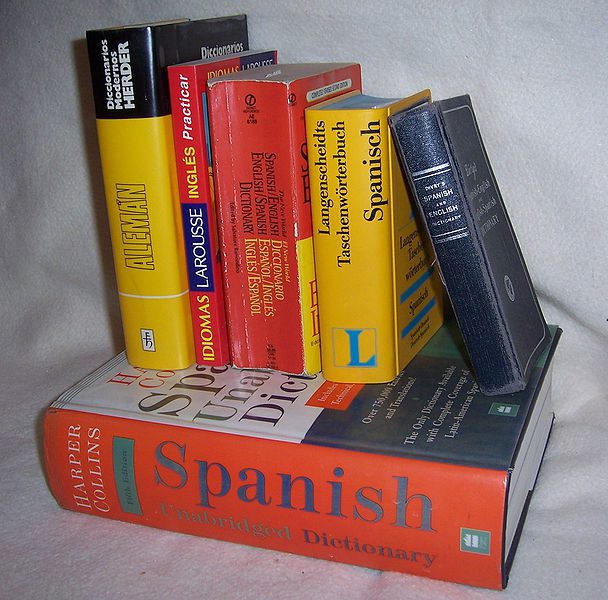 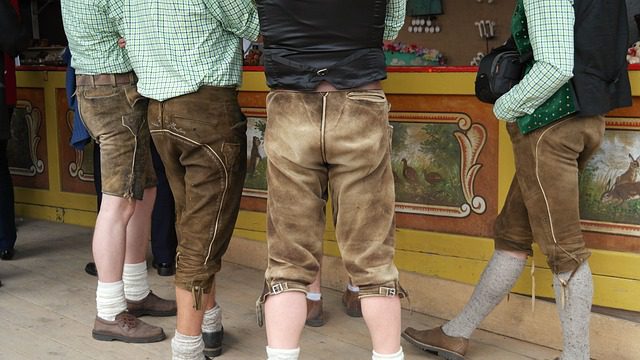 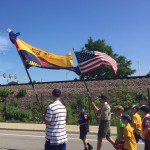 Catholic
Do we need American Exceptionalism?
Jane the Actuary
TRENDING AT PATHEOS Catholic

Cultivating the Virtue of Perseverance in Prayer
Fr. Matthew Schneider did a great job covering the recent case of...
view all Catholic blogs
What Are Your Thoughts?leave a comment
Copyright 2008-2020, Patheos. All rights reserved.