Yes, this irritates me enough to prod me to write after a long break.  Well, that and the fact that it’s Christmas break in my graduate program and we’re all relaxing this evening.

I am not an attendee of the Traditional/Tridentine Latin Mass.  I’ve gone, a few times.  I get the concept, at least I think I do — that it’s not about the Latin per se but about the mass being, at least in part, an opportunity for silent prayer rather than a community event, that the priest is not a “performer” for his audience the instrument through which the Transubstantiation of the bread and wine occurs, etc., so that you don’t actually need to know Latin to find the spiritual meaning in it.  And, heck, I’ve always said, if Elizabeth Ann Seton could convert to Catholicism as a young 18th century widow, as a result of observing mass, rather than despite it, then there is value there.

So it’s not my cup of tea but I fully support those people who do find it to be meaningful, and for whom this form of worship simply is a better fit than the post-Vatican II mass, which, let’s face it, regardless of language, is often enough something much more mundane, with music that offers no sense of the holy, with priests who might face the assembly, but what does that matter, really? And why should those people be punished as a result of the few who say, “only the TLM is valid,” any more than that post-Vatican II mass goers should be punished because among their number are a multitude of Catholics whose belief in the doctrines and moral teachings of Catholicism is tenuous at best.

So when the Pope issued his new regulations over the summer, Traditiones Custodes, I cheered for the bishops who said, “all my parishes where the TLM is said are a-ok with the modern form of mass, and I don’t see any need to make any changes here,” and was saddened at reports of dioceses where the bishop aggressively shut down masses.

Now it’s come to Chicago, where Cupich has issued a letter the exact contents of which are not visible to the public (I suspect quite intentionally so) but some choice quotes and the decrees of which are being reported by Catholic media, for instance, Vatican News, National Catholic Reporter, and National Catholic Register.  (The full letter can be read at the website of St. John Cantius.)

The new requirements ban the celebration of mass in the old form on specific days:  “the first Sunday of every month, Christmas, the Triduum, Easter Sunday, and Pentecost Sunday.”

Yes, you read that right:  on exactly the holiest days of the year, traditional Catholics will be prohibited from worshipping in the way that is most spiritually meaningful to them.

What’s more, even though there is no prohibition, in the post-Vatican II liturgy, of the priest standing “ad orientem,” that is, facing the altar, Cupich has prohibited this as well.

And what are Cupich’s reasons for this policy? Here are the explanations, such as they exist, according to Vatican News:

In continuity with Pope Francis’ own desire, Cardinal Cupich states the hope that this policy will foster a renewed understanding of the “foundations of the liturgical renewal”. He also hopes that the priests will share this with their respective parish communities. The Cardinal then connects rediscovery of “the value of the liturgical reform” with the Eucharistic revival launched by the U.S. Bishops at their November plenary meeting.

Sorry, but near as I can tell, TLM attendees already understand the value of the Eucharist more than your average novus ordo mass-goer, so this is a preposterous claim.

To this end, the Cardinal says that the Archdiocese’s liturgy office will be providing materials and support to priests in providing “liturgical catechesis and formation” so the faithful “can come to a better understanding and deeper acceptance of the restored and renewed liturgy that is part of the precious heritage of the Second Vatican Council”.

This requires that pastors accompany people to understand “the link between the way we worship and what we believe”, the preamble states.

to help them understand the essential principles of renewal called for in the Second Vatican Council and appreciate how the reformed Mass introduces them to a greater use of Scripture and prayers from the Roman tradition, as well as an updated liturgical calendar of feasts that includes recently canonised saints.

Priests seeking authorisation to use the pre-Vatican Missal are also requested to accompany the faithful who want to continue to attend Mass celebrated in that rite. They are asked to discuss the “possibility of using the reformed liturgical rites” which can be celebrated in Latin. In this way, the priest himself manifests that while “seeking the good of those who are rooted in the previous rite,” he is also “accompanying them towards the common use of the one lex orandi of the Roman Rite”.

Which all adds up to the expectation that TLM mass-goers are only to be temporarily accommodated until they can be “converted” to the novus ordo.

Cupich treats these people as if they have been trapped in a cult and need to be deprogrammed, or as if they are immigrants from afar who need loving assistance in integrating into our world.  He fails to recognize that they have found the novus ordo mass lacking, not in terms of some sort of theology, but in terms of what it can offer them in their spiritual life.   Parishes which offer the Traditional Latin Mass often offer both masses, and those who have chosen the former have done so deliberately.  They know that the new liturgical cycle offers three cycles; they are also perfectly capable of reading their Bibles at home.

Or is Cupich perhaps simply cynical?  Parishes are struggling, while St. John Cantius downtown (not an archdiocesan church) is filled to the brim with families who drive in from far afield.  Does he want to “keep those families for himself”?  Heck, I’m not even sure if the Archdiocese gets a cut from their contributions to Cantius as he does from parish assessments, which would mean he has a financial incentive to shut them down, or decrease attendance there.

Whatever his motive, whether he intends it or does so out of ignorance, Cupich is wronging those people who are simply seeking to worship God. 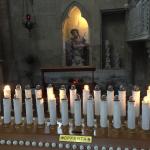 Catholic
Some notes on a Latin mass
Jane the Actuary

Catholic
1001 shifting justifications for the Archdiocese of Chicago's...
Jane the Actuary
TRENDING AT PATHEOS Catholic