Earlier this week, Cardinal Cupich announced that henceforth the Traditional Latin Mass in the Archdiocese of Chicago would be prohibited on the first Sunday of the month as well as the holiest days of the year for Catholics: Christmas, the Triduum, Easter Sunday, and Pentecost, ostensibly in the name of “unity” and in order to see the wisdom of the superior novus ordo mass.  (See my prior blog post for more particulars.)

Since that news came out I have been watching reactions, and three things caught my eye that I wanted to share.

First, Cupich is not simply engaged in his best-faith effort to implement the guidance from Pope Francis.  A twitter account shared a link to a report from 2002, when Cupich was the bishop of Rapid City, when he prohibited the Latin Mass community in Rapid City from celebrating mass together during the Triduum, that is, from noon on Holy Thursday until 8 AM on Easter morning.

Here’s his justification, in the form of a direct quote:

We’re just looking for an opportunity on an annual basis for us to all worship together, for one moment of unity as a Catholic church . . . .

I’m looking for one time each year to do that, and it seems the day the Lord died for us all would be a good day to do it. That’s all that this is about. . . .

There has to be some occasion on a yearly basis to reflect the fact that we are one church under one bishop. . . .  I would ask them, ‘Why do they find it so difficult, on the day of the Lord’s death, to celebrate with their bishop, who is the sign of the Lord’s unity?'”

Cupich says he’s sorry the Latin Mass community is having trouble with his invitation to worship with him at the main Cathedral of Our Lady of Perpetual Help during Holy Week instead of at Immaculate Conception. “I’m supportive of their desire to have Sunday Mass there, and I’m going to be very patient with them,” he said.

But his understanding of Ecclesia Dei is that “… eventually, Catholics have to understand that the reform of the Second Vatican Council is, in fact, an improvement and is important to our spiritual life.”

Cupich’s profession of being motivated by a goal of greater “unity” doesn’t make a heck of a lot of sense to me.  It is not something that would matter to anyone outside that small congregation, for them to celebrate in Latin.  It feels almost as if it is a superstition on Cupich’s part, that these Catholics must be compelled to conform.  But if indeed he feels it is important to have a symbolic shared liturgy, would it not be more pastoral to have that “unity liturgy” occur on a random Sunday in Ordinary Time, rather than on a day when having a reverent liturgy is especially meaningful, given that people who are drawn to Latin Mass generally feel that the modern mass simply lacks the reverence they are seeking?  Prohibiting the Traditional Latin Mass on exactly those Sundays when worshippers most seek it, cannot reasonably be explained as a matter of “seeking unity” since that is just one of multiple objectives and should not be prioritized over the spiritual needs of those he is supposed to be shepherding.  And, of course, his theme of “the new mass is superior and these fools are going to have to accept that sooner or later” has continued since then.
Second, after the news came out, various twitter accounts began sharing reports of the recent “masses” at St. Sabina, headed by Fr. Michael Pfleger.  Essentially, these services bear so little resemblance to a Catholic liturgy that it makes Cupich into a hypocrite for his claim that he is concerned about “unity” in liturgy.  I’ve written about Pfleger before, a man whose preaching bears more resemblance to a Prosperity Gospel huckster than Catholic teaching.  Here, for example, is an article at Catholic News Agency, on the church’s Christmas Eve service, in which

it is not clear from the nearly 2½ hour video of the service, billed as “Christmas Eve at Sabina,” when the liturgy actually begins. There is no apparent greeting, penitential act, or opening prayer, all required Introductory Rites of the Novus Ordo liturgy.

But even this article misses that (at 1 hours, 57 minutes into the video embedded there), Pfleger changes the Words of Institution and ad-libs the entire Eucharistic Prayer, if it even can be called that at all, and transforming it from words of Thanksgiving and into a celebration of the people gathered there.  Here’s my transcription of part of that prayer:

Jesus, we thank you, for the birth of this day, we thank you for being the light that breaks the darkness, we thank you for reminding us that darkness has no power, we thank you for reminding us that evil has already been beaten, we thank you for reminding us that there is no hold on us, that we are the children of the light, that we are the light of the world.
Help us, o God, to come back into the authority to which you have given us, to drive out the darkness wherever it seeks to reside, in our relationships, in our homes, in our streets, in our government, wherever there is darkness that is trying to make us live in fear.  Help us to rise up and smash the darkness, and pierce it with the light that is Christ.
Now Holy Spirit, stir us up on the inside.  Give us back our boldness, give us back our authority, stir up in us the courage that allows us to rise up, to straighten out our backs, to lift up our head and to speak, Thus Saith the Lord, to a world that has turned their backs on him.   Holy Spirit, stir up the gift in us, and may the light that has grown dim and the light that we have hidden, so now burn so bright, that wherever we go, sorrow was replaced with joy, hope replaces hopelessness, and hate turns into love.
Now, Holy Spirit, bless these our gifts, and let them become for us here the Body and the Blood of our Lord Jesus Christ, for remember that before he went to Calvary to pay the price of our salvation, he invited us to table and there took bread and broke it and blessed it, and gave thanks to you, God our Father, and gave the bread to us and said, “Take this, all of you, and eat this, for this is my body, which is given up for you.”

It is spectacularly dishonest of Cupich to say that he is prohibiting Traditional Latin Mass on holy days to promote “unity” while he tolerates this sort of production claiming to be a Catholic Mass.
And, third, one of Cupich’s arbitrary restrictions is that on those mandatory-novus-ordo Sundays, the Latin Mass parishes are also required to have the priest face the people, rather than follow the traditional ad orientem posture, that is, facing the altar.  And, as it turns out, this restriction is made more capricious by the fact that, according to a source which at least seems credible,

the rubrics of the 1970 Missal and the current version of the Novus Ordo Missal . . . assumes that the priest is facing East, that is, toward the God who is to come to judge the living and dead [and] . . . the rubric at the Orate Fratres that tells the priest to “face the people”

that is, an instruction that presumes that prior to that point, as well as for the Peace and the “Behold the Lamb of God,” the priest was not facing the people.
In other words, Cupich’s instruction was not “follow the novus ordo mass in all its specifics” but follow the novus ordo mass in the manner that your generic suburban parish does.  He might as well have mandated that they use guitars and sing from the Gather hymnal, for purposes of unity.

And that’s my rant for today. 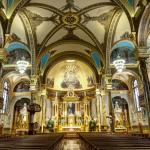