We’ve officially passed St. Valentine’s Day, and, single as I am, I’ve had plenty of time to reflect on love, on what it is we desire in, from, and through others in that all-encompassing concept: love. The Greeks offer us three varieties (I omit storge here): eros, philia, and agape, loosely defined as passionate love, friendly love, and universal-divine love (though none of these definitions exhausts the Greek sense). In the Symposium, Plato’s Socrates (recounting what he has learned from the wise priestess, Diotima) treats eros as a force capable of moving one from passion for an individual to an appreciation for (and an enrapturing by) the form of Beauty itself:

He who from these ascending under the influence of true love, begins to perceive that beauty, is not far from the end. And the true order of going, or being led by another, to the things of love, is to begin from the beauties of earth and mount upwards for the sake of that other beauty, using these as steps only, and from one going on to two, and from two to all fair forms, and from fair forms to fair practices, and from fair practices to fair notions, until from fair notions he arrives at the notion of absolute beauty, and at last knows what the essence of beauty is.

Of course, the same idea exists in the Christian tradition. Love for other is by divine fiat, part of the good work of a faithful Christian. Yet, the Johannine author provides an interesting twist on Plato’s definition:

Beloved, let us love one another, because love is of God; everyone who loves is begotten by God and knows God. Whoever is without love does not know God, for God is love. In this way the love of God was revealed to us: God sent his only Son into the world so that we might have life through him. In this is love: not that we have loved God, but that he loved us and sent his Son as expiation for our sins. Beloved, if God so loved us, we also must love one another. No one has ever seen God. Yet, if we love one another, God remains in us, and his love is brought to perfection in us. This is how we know that we remain in him and he in us, that he has given us of his Spirit. (1 John 4:7-13)

Here, Jesus Christ is the consummation of love, and it is His incarnation that signals the need for us to love one another. One might rise from worldly love to love of God, but this author’s language reverses Plato’s; we contemplate the Incarnation, the undeniable sign of God’s love, so as to love, and discern love in, one another.

Notice here, however, that we work not from difference to unity, but from unity to difference; we assume the simplicity of the all-powerful creator and thence look for signs of his agape in our fellow human beings. The very incarnation of Christ supports this idea. Jesus Christ is the union of difference: true man and true God, begotten, not made, one in essence with the Father. In this sense, the Christian act of love is a recognition of otherness, of difference, in fellow creatures; it assumes the imago Dei, the divine love of the Trinity, and asks us to use this commonality to affirm and value human difference. Hence, in Matthew, Jesus declares:

You have heard that it was said, “You shall love your neighbor and hate your enemy.” But I say to you, love your enemies, and pray for those who persecute you, that you may be children of your heavenly Father, for he makes his sun rise on the bad and the good, and causes rain to fall on the just and the unjust. For if you love those who love you, what recompense will you have? Do not the tax collectors do the same? And if you greet your brothers only, what is unusual about that? Do not the pagans do the same? So be perfect, just as your heavenly Father is perfect. (Matthew 5:43-48)

Love in the Christian understanding recognizes, and thus seeks to encompass and absorb difference, not to do as the pagans, but to be perfect, to attempt to love with the unconditional love of the Creator. Is this not what the Trinity itself signifies? God is relationship, three in one and one in three, a singular God united in difference itself. Witness, Tertullian, writing a couple of centuries after the death of Christ: “What marks us in the eyes of our enemies is our loving kindness. ‘Only look,’ they say, ‘look how they love one another.’”

We cannot imagine that Tertullian, notoriously polemically-minded and puritanical as he was, lived in a community with no differences, united in some sort of New Age universal consciousness. No, here we have an early Church Father, a curmudgeon, telling us that love abounded in his community, that difference was overcome through the desire, the eros, to locate the image of God in every single brother and sister, and therefore to act in kindness, striving to approximate divine perfection, agape, in each and every aspect of life.

This tradition is not merely ancient. Our medieval forebears understood it well. Through the mouth of Nature (an allegory), Alain de Lille makes creation itself, the original act of divine love, a matter of union in difference:

He constructed the marvelous form of the kingdom of the world by the command of His deciding alone…Thus with an exchange of kisses, arising from a certain mutual affinity, He leagued together things hostile to one another by generic opposition, things whose position had placed them on opposite sides, and He changed the strife of contrariety into the peace of friendship. When all things, then, were harmonized by the fine chain of an invisible connection, in a peaceable union, plurality made its way back to unity, diversity to identity, discord to concord.

When the artisan of the universe had clothed all things in the outward aspect befitting their natures, had wed them to one another in the relationship of lawful marriage, it was His will that by a mutually related circle of birth and death, transitory things should be given stability by instability, endlessness by endings, eternity by temporariness and that the series of things should ever be knit by successive renewals of birth.

No definition has better summed it up than that of George Grant: “Love is consent to the fact that there is authentic otherness.” Part of the Christian mission is this very acceptance that unity in difference and difference in unity constitute the very creation in which we participate. We must affirm difference if we desire unity.

It is on that note that I’d like to engage in a Lenten exhortation of sorts. Dorothy Day and Peter Maurin used to go around quoting Lenin, Mao, and various Communist leaders, quoting their saying kind-sounding things, only to spring the truth on their unsuspecting listeners. The point was simple: live the insane call of loving everyone and everything regardless of how different he or it might be from you. As Day put it: “Marx… Lenin… Mao Tse-Tung… These men were animated by the love of brother and this we must believe though their ends meant the seizure of power, and the building of mighty armies, the compulsion of concentration camps, the forced labor and torture and killing of tens of thousands, even millions.”

If there’s a Catholic weapon for defeating ISIS, this would seem to be it. We must desire unity by affirming difference: the ancient and seemingly absurd Christian way. Tertullian’s (misquoted) credo quia absurdum is not quite it, but there’s some truth to the idea that we should believe that we must love our enemies, no matter how heinous. And what of dedicating our Lent to them, to their loving and beloved conversion? What of smearing ourselves with ashes and forgoing meat in the name of love of enemy? They are different, but they are also the same; they stand apart from humanity, barbarous, and yet God demands that we desire them so that we might desire Him; He refuses us the avenue of apathy, and commands our obedience to their otherness. If we are to follow Christ, to be true to our tradition, there can be but one response. 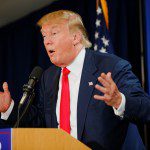 February 21, 2016
Pope Francis: “Donald Trump is a Protestant”
Next Post 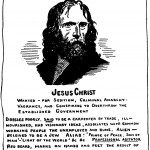 February 24, 2016 Karl Marx: Moralist
Recent Comments
0 | Leave a Comment
Browse Our Archives
get the latest from
Jappers and Janglers
Sign up for our newsletter
POPULAR AT PATHEOS Catholic
1

How White Men Lost the Meaning...
suspended in her jar
Related posts from Jappers and Janglers