No works. Faith. No good. Or so goes the conventional Catholic understanding of justification in my untrained eyes. We are justified by faith, but if we don’t respond with works, guided by grace, well, who cares? Two Catholic Epistles, will help illustrate the point:

What good is it, my brothers, if someone says he has faith but does not have works? Can that faith save him? If a brother or sister has nothing to wear and has no food for the day, and one of you says to them, “Go in peace, keep warm, and eat well,” but you do not give them the necessities of the body, what good is it? So also faith of itself, if it does not have works, is dead. Indeed someone may say, “You have faith and I have works.” Demonstrate your faith to me without works, and I will demonstrate my faith to you from my works. You believe that God is one. You do well. Even the demons believe that and tremble. Do you want proof, you ignoramus, that faith without works is useless? Was not Abraham our father justified by works when he offered his son Isaac upon the altar? You see that faith was active along with his works, and faith was completed by the works. (James 2:14-22)

The Johannine author helps us out too:

We have come to know and to believe in the love God has for us. God is love, and whoever remains in love remains in God and God in him. In this is love brought to perfection among us, that we have confidence on the day of judgment [sic] because as he is, so are we in this world. There is no fear in love, but perfect love drives out fear because fear has to do with punishment, and so one who fears is not yet perfect in love. We love because he first loved us. If anyone says, “I love God,” but hates his brother, he is a liar; for whoever does not love a brother whom he has seen cannot love God whom he has not seen. This is the commandment we have from him: whoever loves God must also love his brother. (1 John 4:16-21)

And, as the author of another Johannine epistle reminds us, the very act of writing, combined with visiting, is a good work, a work of exhortation and edification:

But now, Lady, I ask you, not as though I were writing a new commandment but the one we have had from the beginning: let us love one another. For this is love, that we walk according to his commandments; this is the commandment, as you heard from the beginning, in which you should walk…Although I have much to write to you, I do not intend to use paper and ink. Instead, I hope to visit you and to speak face to face so that our joy may be complete. (2 John 1:5-6, 12)

To play on part of the Byzantine divine liturgy: “Catholic epistles for Catholic people.” And it’s this, I think, that Pope Francis was gesturing toward with his recent Trump comments. In responding to a question about Trump’s comments about him as a possible pawn of the Mexican government, the Holy Father answered thus:

[A] person who thinks only about building walls, wherever they may be, and not building bridges, is not Christian. This is not in the gospel. As far as what you said about whether I would advise to vote or not to vote, I am not going to get involved in that. I say only that this man is not Christian if he says things like that. We must see if he said things in that way and in this I give the benefit of the doubt.

Of course these remarks were clarified, by Fr. Lombardi to be general, that is intended for anyone who wants to separate people and not connect them.

Still, I think the lesson here has been missed by the media, which has often construed the comments as directed, partisan, and controversial (examples here, here, and here). Donald Trump, the man who claims to be a Christian, but puts money on Communion trays, might very well believe the Good News. But that’s not entirely what matters. His works are not Christian ones; they defy the love spoken of by both of the Catholic Epistles cited above. Walls, deportations, and vain celebrations of wealth are fruits of a (rotten) sort.

In other words, Donald Trump might be a Christian, but he’s certainly not a Catholic. And though the pope didn’t say exactly that, it might be gleaned from his comments (especially in light of his comments on the death penalty today: another fruit we Apostolic Christians are called to manifest). In good Catholic fashion, the Holy Father was saying nothing about the businessman’s soul, and saying everything about the works manifested by the faith in that soul. Heck, Trump is a Presbyterian; he could hope he’s been elected (pun fully intended).

The comment also has a wider import. Too often, devout Catholics, politically look the same as evangelicals (though differences do exist, especially ethnically in intra-religious voting). Of course, I do not mean that Protestants are not engaged in good works; nothing could be further from the truth. But, if we’re going to get accused of being pagans and Pelagians, we might as well put our fruits where our hearts are and start manifesting some of that famous Johannine love. Our actions ought to always and everywhere manifest that love, whether it means the world’s hatred or its vain praise; Catholics (and other Apostolic Christians) should look distinct in our commitment to works, as found in our special epistles. In other words, we should align ourselves not with Donald J. Trump, but with Meister Eckhart von Hochheim:

Married folk bring forth little more than one fruit in a year [a child]. But it is other wedded folk that I have in mind now; all those who are bound with attachment to prayer, fasting, vigils, and all kinds of outward disciplines and mortification…A virgin who is a wife [a highly devout Christian], is free and unfettered by attachment; she is always as near to God as to herself. She brings forth many and big fruits, for they are neither more nor less than God himself. This fruit and this [emphases not mine] birth that virgin bears who is a wife, bringing forth daily a hundred and a thousandfold! Numberless indeed are her labours begotten of the most noble ground, or to speak more truly, of the very ground where the Father begets His eternal Word: it is thence she becomes fruitful and shares in the procreation…Jesus is made one with her and she with him, [sic] she is radiant and shining with him in one single unity, as one pure brilliant light in the paternal heart. 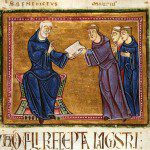 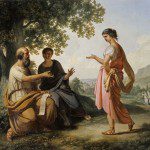 February 22, 2016 Erotics, Difference, and Loving ISIS
Recent Comments
0 | Leave a Comment
Browse Our Archives
get the latest from
Jappers and Janglers
Sign up for our newsletter
POPULAR AT PATHEOS Catholic
1