The Corpse of Culture Wars Catholicism

The Corpse of Culture Wars Catholicism May 13, 2016 Chase Padusniak

The culture wars are over; they lost, we won […] For liberals, the question now is how to deal with the losers. That’s mostly a question of tactics. My own judgment is that taking a hard line (‘You lost, live with it’) is better than trying to accommodate the losers, who – remember – defended, and are defending, positions that liberals regard as having no normative pull at all. Trying to be nice to the losers didn’t work well after the Civil War, nor after Brown. (And taking a hard line seemed to work reasonably well in Germany and Japan after 1945.)

As Camosy notes, Tushnet’s rhetoric is part of the problem, but he isn’t wrong about a certain reality: the “conservative side” in the culture wars has lost ground on a multitude of issues from gay marriage to transgender-rights (and that’s not even including the fact that at the beginning of these so-called wars homosexuality itself was illegal in some states). Only in the case of abortion has such “warfare” produced desired results (and even those gains are diminishing). With this in mind, Camosy notes that

A record 43 percent of Americans now identify as independent. For millennials, that number rises to 50 percent. Latinos, while generally economically liberal, are also generally socially conservative. These two demographics will dominate our coming political realignment, and they have utterly rejected Tushnet’s 1970’s-style politics.

Indeed, if Tushnet and others continue along these lines, they risk being compared to Japanese soldiers continuing to fight in Sumatra and New Guinea in the 1950’s.

But he did get one thing right: the culture wars are over. Not because one side lost and the other won, but because that way of seeing the world is in the process of being replaced by something else.

It may be nothing less than providential that our national political, demographic, and cultural shift is taking place just as Francis fully seeps into our public consciousness. This is a pope who insists capitalism kills and climate change is a crisis, but who also compares contemporary gender ideology to nuclear war and abortion to a Mafia hit.

The left/right culture wars persist today in much the same way a long-term relationship persists, long after it has actually ended.

This point is perhaps the point for contemporary Catholics. More often than not, we hear it declared that we are “Catholic first,” “neither Left nor Right,” etc. And yet, the mentality of the Culture Wars, that is, the mentality of the Left-Right divide, dominates our discourse. Catholics, like myself, who represent this precise position (anti-death penalty, accommodating, though suspicious, of the welfare state, pro-life from natural conception to death, and most of all, uninterested in polarizing name-calling) are not often taken seriously. “Too traditional” and “too conservative” for much of the Left, and “too liberal” and “too culturally accommodating” for much of the Right. And yet, we are far from the actual minority of the American Church, not to mention the global one (this, Camosy notes in his piece).

The current controversy surrounding deaconesses speaks volumes about this problem. On the one side, to speak favorably at all is to hand the Church to the un-grounded, the “liberals,” the “Feminists.” On the other, to mention the historical differences in male and female diaconal orders is tantamount to sexism. As a result, the Church remains politically paralyzed, interpreted by the culture at large as a “boys club” broken apart only by the “Francis Revolution.” Of course, “conservatives” respond by making the Faith that much less attractive, that much less likely to convert hearts.

In other words, both “sides” of the Church are stuck in the spirit of a bygone era, an era that, as Camosy attests, has not been with us for some time, and is only fading fast. This is why the Catholic-GOP alliance is dead; this is why our society sees the Church as a relic; this is why so many Catholic leaders have sat by unable to understand the Bernie-Trump phenomenon.

On that last point, George Weigel’s hapless confusion stands out as a solid testament:

It’s become a cliché to say that “no candidate and no party fully embraces the vision of Catholic social doctrine.” True enough. But previous election cycles gave Catholic voters a prudential choice between candidates who embodied at least some of the major themes of the social doctrine. What is the thoughtful Catholic voter to do when neither of the presidential candidates is even minimally committed to human dignity, the common good, subsidiarity, and solidarity, as the social doctrine understands those concepts? When one party has elevated lifestyle libertinism to the first of constitutional principles (and is prepared to kill unborn children, jettison free speech, and traduce religious freedom in service to hedonism), while the other is prepared to nominate a fantasist who spun grotesque fairy tales about an alleged connection between an opponent’s family and Lee Harvey Oswald shortly before he closed the deal?

Catholics have been compromising for too long, selling the anti-abortion fight to elites interested in usury, the effectual overturning of Rerum Novarum, and, frankly, unseemly behavior. What we need now is a commitment not to war, but to peace, not to heat-filled and hateful rhetoric (“pro-aborts,” “libtards,” “boys clubs”), but to incinerating the political idols we have fashioned for ourselves with the burning love of the Spirit. The way forward for the Church, the way toward reclamation not only of souls, but of our very identity, lies in an end to such inanity. Choose: obscurity in a house divided or revitalization in a house united.

And, in case anyone had any doubt that such an inability to face the times in the love of God has plagued the Church before, I offer you a prescient reminder from the mouth of Jacques-Alain Miller:

There is something sublime in the Syllabus. The Pope, besieged by the French and the Italians, entrenched in his small Vatican island, says: ‘No, never!’ It can be held that Pius IX was right to maintain that position in the beginning, that the status of the Church had to be confirmed. But history is dialectic.

So there was the epoch of the Syllabus [of Errors] – the epoch of the ‘No!’ – and then there was the epoch of Rerum Novarum, in 1891. Leo XIII did not say: ‘We must be reconciled with the spirit of the times’, but he went ahead and did it. We must, he said, take into account the working class, accept democracy, the Church is not bonded forever to the aristocracy. The aristocracy was slipping little by little out of history. To attach the legacy of Christ – we can say this in Marxist terms – to a class condemned by history would be a betrayal of the legacy handed down by the apostles.

And thus, on the gaming table of history – which we can think of as a casino table, Pascal’s wager being nothing else but eternal life represented as a green cloth – with Rerum Novarum, the Pope – who is sometimes called Pius IX, sometimes Leo XIII, but who is in all cases the Pope – takes the wager of the Church and moves it, from the aristocracy to democracy.

I don’t really know what the effect of Rerum Novarum was in Italy – I did not learn that in school – but in France, the Catholics, monarchists, reactionaries, ‘all the old rightwingers’, who detested the French Revolution, when they met up with Rerum Novarum, said to themselves: ‘That is not possible! How can a message come from Rome say just the contrary of what Pius IX’s message said?’

So then, what did people think in France? What rumor was spread throughout the country? That this was an imposture, that the Pope had been changed, that it was a double who had promulgated Rerum Novarum, while the real Pope was held prisoner in the caves of the Vatican. Is this so absurd? Today we’re told that Saddam Hussein has eight different doubles. So, it was believed that Pope Leo XIII had one. 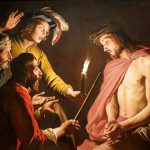 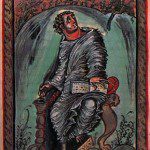 May 19, 2016 Feeling and Loving with the Dead
Recent Comments
0 | Leave a Comment
"I am completely unclear why you are using the word "liberalism" to mean something completely ..."
Iain Lovejoy Liberalism, or Rule by Technicality
"Yes, the end of empire stales the imagination and disables creative and effectual alternatives to ..."
CorneliusFB In the Ruins of Decaying Empire
"Then 80% of of will be equally miserable poor people. The 20% who are more ..."
bill wald Christ Forgives Debts, so Should We
"DISAGREE! We are required to forgive personal sins (trespasses) made against our persons. We are ..."
bill wald Christ Forgives Debts, so Should We
Browse Our Archives
get the latest from
Jappers and Janglers
Sign up for our newsletter
POPULAR AT PATHEOS Catholic
1