Christ Forgives Debts, so Should We

Christ Forgives Debts, so Should We November 16, 2020 Chase Padusniak

These students were sold a bill of goods, told that there was little hope for them in tomorrow’s economy without a degree. They dutifully obeyed and tried to build better lives, just as their parents (and society on the whole) wanted. This, in many cases, required debt, even at modest levels. All the more so for those who pursue graduate school degrees (especially master’s, which tend not to be funded)—hoping to win a better, more prestigious life through extra years in the classroom. As the economy slows down, these debts get harder and harder to pay back. Not only did the higher-ed bubble lie to them, it failed to deliver even on the possibility of meaningfully better earnings. Exploring the origins of the bubble are not possible here (length and all that), but it should be clear enough: students suffer for trying to improve their lives and our society.

“But, Chase,” my interlocutor might balk, “it’s still not fair! I mean, again, what if I’ve paid mine back?” Well, dear reader, my previous retort aside, I am someone who has spent years paying his undergraduate debt back and it does not bother me in the least. The suffering of others does not make me happy. In fact, knowing that others can eat and sleep better, build bigger, closer families, live life more comfortably—all that warms my heart and induces the praise of the Lord from my lips.

I’d like to go a step further though: what do we mean by fairness? Is it fair to be lied to about your prospects by society and by your university? Is it fair to grow up in a household broken by austerity, living in relative poverty? Is it fair to attend underfunded public schools (or, at least, say, not boarding schools)? Is it fair to have familial connections in a local workplace or industry? Is it fair to call the existing order fair? Why does that baseline win the right to our respect? Why are things unfair when they depart from this contingent reality, but not when they enforce that set of unjust conditions in the first place?

And that really is the preferable word: just. Life ain’t fair—that’s one tenet of Christianity. God is just—there’s another. What we pursue as Christians is a more just society. That’s what jubilees were about (ah, I brought them up!). That’s what Catholic Social Teaching focuses on. It is as Pope Benedict XVI said in 2012:

In this world of ours, in which, despite the profession of good intentions, the value of the person, of human dignity and human rights is seriously threatened by the widespread tendency to have recourse exclusively to the criteria of utility, profit and material possessions, it is important not to detach the concept of justice from its transcendent roots. Justice, indeed, is not simply a human convention, since what is just is ultimately determined not by positive law, but by the profound identity of the human being. It is the integral vision of man that saves us from falling into a contractual conception of justice and enables us to locate justice within the horizon of solidarity and love.

We cannot ignore the fact that some currents of modern culture, built upon rationalist and individualist economic principles, have cut off the concept of justice from its transcendent roots, detaching it from charity and solidarity: “The ‘earthly city’ is promoted not merely by relationships of rights and duties, but to an even greater and more fundamental extent by relationships of gratuitousness, mercy and communion. Charity always manifests God’s love in human relationships as well, it gives theological and salvific value to all commitment for justice in the world”(7).

“Blessed are those who hunger and thirst for righteousness, for they shall be satisfied” (Mt 5:6). They shall be satisfied because they hunger and thirst for right relations with God, with themselves, with their brothers and sisters, and with the whole of creation. (Message of His Holiness Benedict XVI for the Celebration of the World Day of Peace)

How about that? A less contractual notion of justice—go figure!

Dear reader, I have seen this at work in my own life. Someone very close to me went to community college, received a 4.0 GPA, got a scholarship to attend a public university, and kept up a 4.0 GPA there all while holding down two jobs. This person majored in a science, with minors in other fields. Their family is not well off, but both of their parents worked hard in fields that spread the Lord’s love for humanity (teaching, caring for the disabled, attending to the mentally ill). To see that person graduate with debt and even face homelessness, in spite of all that—it makes my blood boil. It makes me call out to God for His justice and His mercy.

So, go ahead, Joe: Christ forgives, so should we. 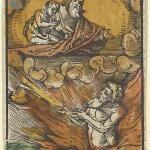 November 23, 2020 Prayer is Left
Recent Comments
0 | Leave a Comment
Browse Our Archives
get the latest from
Jappers and Janglers
Sign up for our newsletter
POPULAR AT PATHEOS Catholic
1

St. Mary Magdalene Was Not a...
Femina Ferox
Related posts from Jappers and Janglers