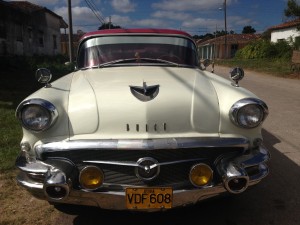 Open your eyes and you are in the late 19th century. Horse-drawn carriages clip along, the spokes of their wheels blurring together as they deliver cargo to its destination.

Close your eyes and open them again. It is 1950. Gleaming Buicks, Chevrolets and Oldsmobiles parade by touting progress and post-war determination.

Close your eyes and listen. The clip of horse hooves and the roar of engines join the boom of hip hop and the sound of street vendors hawking their wares. Roosters crow and birds sing tropical tunes.

People told me, but I couldn’t imagine the configuration of 1850, 1950 and 2013 that makes up daily life. It’s as film strips were spliced together from each era and replay in succession. My head shook in disbelief all of this past week.

The political history plays itself out in these disjointed film strips. Passionate power grabs are evident in the fits and starts of eras long gone and the contemporary culture seeping through cracks made in the sixty years since the Revolution.

Touring museums of the Revolution, I grew in admiration for Che Guevara and the Castro brothers and those who sought to overthrow an oppressive regime. I don’t doubt their intentions. They had high hopes for their country and were willing to stand up to the empire of the United States, resisting the 1950’s interventionist foreign policy that seriously messed with much of Latin America. However, their determination mixed with American arrogance in a way that has left the Cubans stuck in a quagmire of forces out of their control. After decades living in a society that is supported by foreign governments, it seems hard for Cubans to imagine self-starting, sustainable innovation.

Instead, they just want to leave. One young person told me that it is the grand dream of every young Cuban to leave Cuba. Another said that I should wake up every day and thank God that I was born in the United States. This feeling that life would be better somewhere else, that escape is the best answer, pulses through Cuban life. Progress is slow enough to feel inconsequential here and the leap to the U.S. is enticing.

Meanwhile, families are split apart. A father in New Jersey. An aunt in Tampa. A cousin in Toronto. A daughter in Portland. Marriages are held together by weekly phone calls and bi-annual visits if you are lucky. One thing that has not held over from the 1950’s is the idyllic mother and father raising their children. Families are scotch taped together with who is left to build neighborly bonds through the bumps of life. The hardship makes for a unique beauty – particularly among the women who walk arm in arm through the machismo and escapism that characterizes the ambitions of the men they love.

We came to deepen our friendship with our sister church in the center of Cuba. Their community lives in the midst of all of this. Adolescents gather weekly to sing, play and learn. An elderly group shares their concern, gratitude and hopes over lunch on Thursdays. They laugh and sing and cry together, gathering courage to keep loving and giving as much as they can.

We brought suitcases full of material things and plan to send more. We left money that is so easy for us to dispense of but means a month’s worth of food to them. I fret about paternalism and issues of power, but their pride and generosity alleviate some of my concern. The material difference dissolves in the gift of their friendship and the chins that are held high as we exchange kisses on the cheek with each hello and goodbye.

The world is complicated for all of us. There’s just a magnifying glass on it here in Cuba. We are all servants to forces that we did not create and cannot control. Our choice is to continue to listen to love beyond fear, and in that love to remember the words of Jesus, “In this world you will have trouble, but do not fear, I have overcome the world.” This remembrance is an act of faith beyond sight most days.

The clip of horses and afternoon sips of sweet strong coffee will soon give way to SUVs in the school drop off line and my husband’s french press coffee as I return home to a very different reality. “In this world you will have trouble, but do not fear, I have overcome the world.” Faith that moves beyond fear to love. May it continue to pulse in my heart and in the hearts of my new friends who continue on in Cuba.

February 13, 2013 Christianity in ashes
Recent Comments
0 | Leave a Comment
"I find the idea of the article interesting. Sometimes a smaller group or people that ..."
Trevor Rowland Book Response: How to Be a ..."
"This article is very insightful sometimes I feel like going to church just seems like ..."
Trevor Rowland Book Response: How to Be a ..."
"Basically what I got out of this is the story of Nelson Mandela provides hope ..."
Trevor Rowland Privileged stories
"So good, Jenny."
idelette Privileged stories
Browse Our Archives
Related posts from Breathing Room: Faith Beyond Either/Or