The holy prison of Lent

I spent 5 days on Robben Island in January 2015 where Nelson Mandela was imprisoned between 1964-1982. With me were a group of peacemakers and activists from around the world.  This blog series is a set of reflections on that time.

The most dangerous political prisoner on Robben Island was not Nelson Mandela. His name was Robert Sobukwe and he was the founder of the PAC, the Pan Africanist Congress party, which insisted on African solutions to African problems.

He was imprisoned on the island in a small house away from the main prison where he was kept in isolation for six years. He was forbidden from speaking, even to his jailers, and for a time, he lost his ability to speak. His imprisonment continued indefinitely for six years beyond the original three year sentence because of a clause in the South African constitution that allowed the Minister of Justice to extend his imprisonment without trial or due process.

Robert Sobukwe found other ways to communicate with the fellow prisoners on the island. Every morning when they would walk to the lime quarry to work, he would stand in the yard of this house, pick up a handful of soil and allow it to run through his fingers to remind them that the land belongs to the people.

As we visited the house where he was confined, I was moved by the tenderness of Sobukwe’s letters to his wife and that while he was in prison he earned a law degree and deepened his spiritual practice. He wrote, “I believe it’s God’s will that I should come here to realize how much love there is in the world and to get my sense of values right. Above all else, I have had a chance to know myself – neither as a saint or a devil; just a bundle of capabilities in the hands of God.”

As I stood outside the Sobukwe house and let the soil run through my fingers, I thought about prisons. It would be easy to only focus on the tragedy and injustice of Sobukwe or Mandela’s imprisonment and their years of wasted productivity. But when you listen to their reflections on their imprisonment, it seems like an incredibly productive time for them because of choices that they made inside their prisons. The transformations that occurred within them are things we all long for – we long to be more compassionate, more connected to God, more grounded in who we are and what we are called to be in the world.

Most of us will not go to a physical prison in order to take that journey but we are all in prisons of a different sort if you think of prison as any constraint in our life. We are in prisons that we did not choose – our family history and attending dysfunctions that we are born into, the culture that we grew up in, the bodies we are given with their genetic dispositions and limitations, the choices others have made that we become victims of. We are in prisons that we did choose – consequences to our actions and choices that we must live with every day, resentment and blame that we carry, constraints that we have chosen to live with – even good constraints. We are limited because we are human and in some way, we are all imprisoned.

Is it possible for us to see the same possibilities in our places of imprisonment?

When Nelson Mandela died in 2013, Desmond Tutu wrote this:

People say, look at what he achieved in his years in government – what a waste those 27 years in prison were…The time in jail was quite crucial. Of course, suffering embitters some people, but it ennobles others. Prison became a crucible that burned away the dross. People could never say to him: “You talk glibly of forgiveness. You haven’t suffered. What do you know?” Twenty-seven years gave him the authority to say, let us try to forgive. (http://www.theguardian.com/commentisfree/2013/dec/06/desmond-tutu-nelson-mandela)

Several people have asked me what it was like to be at Nelson Mandela’s cell. Honestly, it was a thin place for me – where God felt closer and the ground felt sacred, particularly on the morning when a friend and I wandered in before any tourists had arrived and the hall was silent with streaming morning light. What made it sacred for me was not the imprisonment Mandela faced but the freedom he found because of the internal work he did while he was there.

Mandela wrote of his cell as

“an ideal place to learn to know yourself, to search realistically and regularly the process of your own mind and feelings. Honest, sincerity, simplicity, humility, pure generosity, absence of vanity, readiness to serve others – qualities which are within easy reach of every soul – are the foundation of one’s spiritual life. Development in matters of this nature is inconceivable without serious introspection, without knowing yourself, your weaknesses and mistakes. At least, if for nothing else, the cell gives you the opportunity to look daily into your entire conduct, to overcome the bad and develop whatever is good in you… Never forget that a saint is a sinner who keeps trying.”

Standing in that place, where an angry young man exchanged his resentment and anger for forgiveness and love through simplicity, silence, deep community and intentional spiritual practices for 18 years made that ground holy.

And, we have the opportunity to make the ground of our prisons holy as well. This is what the season of Lent is all about. It’s not about giving up chocolate or coffee because it’s good for us, it’s about choosing constraints that make space for transformation to happen. We enter into a “prison” of our own choosing only to find that it is a place that frees us from the interior prisons of resentment, blame, anger, fear, and shame.

Welcome to Lent, my friends. May the confines that you choose or that choose you become spaces to let go of what holds you and find the freedom to dance the steps of grace.

June 2, 2016 From shame and blame to belonging
Recent Comments
0 | Leave a Comment
Browse Our Archives
Related posts from Breathing Room: Faith Beyond Either/Or 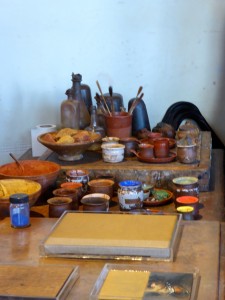